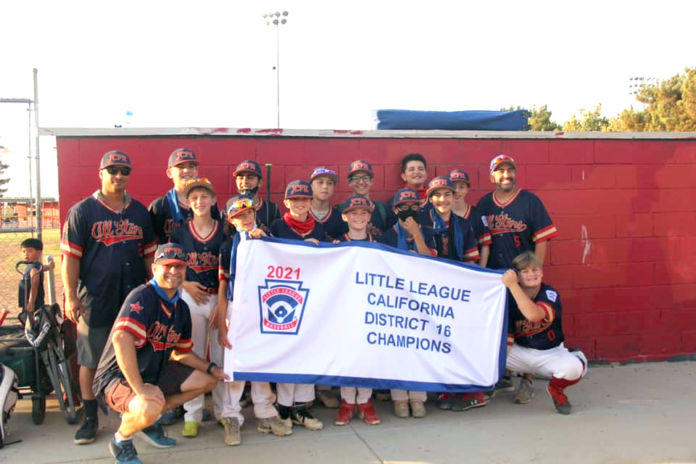 The Jewel City/Foothill Little League Major All-Star team, which recently captured the District 16 baseball championship, played three games in three days from July 17-19 as a participant in the Section 2 tournament. The local athletes posted a 1-2 record against stiff competition, but it was rare accomplishment just to win their district tournament to get there.
“The overall experience was great,” said coach Adam C. Aparicio of his players, most of whom were ages 11-12. “I believe it’s the first Jewel City/Foothill team to go to sectionals since 1984.”

Key to winning the District 16 title and competing in sectionals was the combination of all-stars from the Jewel City and Foothill Little Leagues.
“Coach Scott Millward and the Foothill players meshed so well with the Jewel City players,” said Aparicio, who comes out of Jewel City Little League. “We could not have been as successful without the key players that Foothill provided.”
The games were played in Palmdale, which meant the Glendale-area Little Leaguers had more than just the opposition to contend with.
“The field itself had its own challenges,” Aparicio said. “There were definitely some challenges with heat and the wind. So it’s something the kids hadn’t played before, but it was good baseball.”
Game one saw Jewel City/Foothill match up with Sherman Oaks and suffer a 9-2 loss. The JC/F squad kept it close at 5-2 into the sixth inning before the eventual tournament champions pulled away at the end.

JC/F’s Josiah Saroughian was perfect at the plate, going three for three with three singles. JC/F’s runs were driven in on a home run blast by Isaac Saroughian and a double by Nic Aparicio.
Faced with adversity, Jewel City/Foothill came back the next day and throttled Quartz Hill, 10-0. The game was shortened to four innings. It ended with a walk-off double in the bottom of the fourth by Kieran Sinta, whose hit pushed the advantage to double digits and invoked the “mercy rule,” bringing the contest to an end without Quartz City recording an out in the frame.

“As a father and a coach, seeing them react to a loss and make no excuses and play that much harder the next day was just amazing,” coach Aparicio said.
Josiah Saroughian, Nic Aparicio and Sinta each had two hits, with one, two and three RBIs, respectively. Isaac Saroughian added a home run. Jordan Mahler had a quality start on the mound, going 3 1/3 innings and striking out four, before giving way to Josiah Saroughian, who recorded the final two outs on strikeouts.

The third game for Jewel City/Foothill pitted them against Pasadena American. The Pasadena squad would win, 10-3, to end the JC/F All Stars’ run in the double-elimination tournament, but the game was closer than the final score would indicate.
Nic Aparicio, in what was his last Little League game, hit a game-tying home run in the bottom of the fifth to tie the contest, but Pasadena American’s offense broke through in the first extra frame, ending it in seven innings. Joshua Solis had two hits.
“[Our pitchers] came off their wheels in the extra inning,” coach Aparicio said. “In the seventh it just got away from us.”

In the field, Josiah Saroughian caught a ball in the top of the fifth just short of the centerfield fence and easily threw out a Pasadena American runner at the plate for an inning-ending double play.
“It was the maybe the best centerfield throw I have seen in my life,” coach Aparicio said.
Upon their Section 2 tournament exit, the Jewel City/Foothill Major All-Stars learned a lot and will take with them many fond memories from a successful season.
“I did tell [my team] I was extremely proud of how they played with integrity, how they played with complete fairness [and] how they played with hustle,” coach Aparicio said. “Hats off to Pasadena American and Sherman Oaks; they played great games and they beat us.”