Marchers Back Cubans Versus Regime 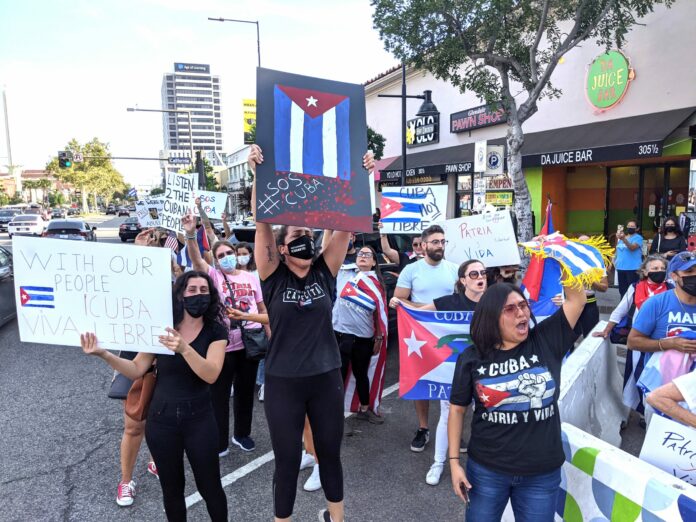 Hundreds of people of Cuban descent and their supporters demonstrated recently in downtown Glendale, where most cried “¡Libertad!” in support of the Caribbean nation’s residents, who also have taken to the streets in recent weeks and have been confronted by the communist regime’s security forces.

After massing on the afternoon of Friday, July 23, in front of Porto’s — the flagship store in the local bakery chain founded by Cuban refugees — the group marched down Brand Boulevard, turned around at City Hall on Broadway and looped back to the eatery. They carried signs bearing messages ranging from simple slogans — “SOS Cuba” or “Patria y Vida,” evoking the hip-hop song by Cuban exiles that has become a theme for the recent movement — to a more pointed clarification of why they were in the streets: “It’s not the embargo. It’s the Cuban regime.”

One such sign made that second sentence appear to be dripping blood.

Protests and riots erupted throughout Cuba’s capital, Havana, and other cities on the island in July in response broadly to the economic fallout of the coronavirus pandemic — food shortages and power outages have mounted — and the government’s inability to develop an effective vaccination program for citizens. Protesters are also decrying the lack of basic civil liberties and political rights in a nation that practices central planning and has since 1959 been ruled by an authoritarian Communist Party after Fidel Castro led a successful revolution against the military dictatorship of Fulgencio Batista.

Cuban police and other security forces have responded to the recent demonstrations by beating protesters in the streets, arresting them and their families and detaining them in unspecified locations. Journalists have been arrested during live interviews with international outlets, internet access has been cut off and there have been reports of hasty secret criminal trials against protesters lacking defense attorneys.

Betty Porto, whose mother, Rosa, founded the namesake bakery and who operates the Glendale location, noted that it was rare for protests in Cuba to reach beyond Havana.

“Even there [in the smaller towns], there are people marching in the streets,” said Porto, who was 14 when her family left Cuba in 1971, “and even there, they’re cracking heads.”

The United States had carried on a trade embargo of Cuba, which is about 90 miles south of Florida, since Castro took power, although other nations maintain diplomatic and trade relations with the nation. Still, rather than buying ready-made vaccines from other nations, Havana has elected to develop its own inoculations, a decision that in light of recent coronavirus outbreaks in Cuba has added fuel to the fire for protesters.

One clear message from Glendale’s demonstration — where participants also chanted “¡Abajo el comunismo!” — was that they were in the street entirely because of Havana’s actions, not Washington’s.

“If we look at the videos and what the people are demanding, they’re asking for freedom, for democracy,” said Jason Canela, a first-generation Cuban American from North Hollywood who organized Glendale’s demonstration. “You will not find one video of them asking to end the embargo.”

American presidential administrations have, to varying degrees, unsuccessfully pressured Havana to relax political and economic rights as a step toward diplomatic normalization, which officials here claim would bring humanitarian benefits like reuniting families and precluding the need for desperate Cubans to flee illegally by boat to Florida. In a nod to such dissidents who have fled the island since the revolution, one sign last week read “We were born free thanks to our Abuelos” — grandparents.

Paul Diaz, a Cuban American who has lived in Glendale since 1992, said this moment is particularly emotional for his community, which is often prompted to ask itself, “If not now, when? When is this going to come to an end?”

“For us, it’s always, ‘When is Cuba going to be free?’” he explained. “‘When am I going to see my relatives?’ My whole life, that’s what’s been talked about.

As the march last week wrapped up, the group gathered in a circle to observe a moment of silence for protesters and political prisoners not just in Cuba, but other Latin American nations, such as Venezuela and Honduras, with histories of political and civil rights repression. Raising their arms, demonstrators made an L shape with their thumbs and index fingers — symbolic of Libertad, or liberty.

Perhaps no singular action last week showcased the chasm between protests here and in Cuba than when a Rancho Cucamonga man, using a mixing bowl and a wooden pestle as a makeshift drum, approached a police officer and encouraged him to take a couple of swings at the dented bowl.

The officer smiled and obliged, and the man moved on.