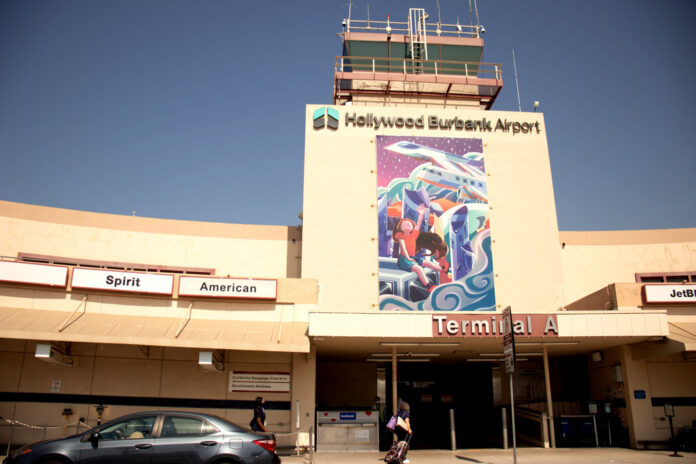 The recently passed stimulus package will likely present a boon for the Hollywood Burbank Airport, which has been facing steep revenue losses as passenger levels remain low.
In recent meetings, representatives of the Burbank-Glendale-Pasadena Airport Authority reported that the number of revenue passengers who traveled through the airport last year fell to about a third of the level in 2019. About 2 million passengers enplaned or deplaned at the Hollywood Burbank Airport in 2020, compared to nearly 6 million in 2019.
And in January 2021, officials told Airport Authority commissioners — who include City Council members Paula Devine, Ara Najarian and Vrej Agajanian — this week, the number of revenue passengers dropped by nearly 86% compared to January 2020.

“To me,” said Ross Selvidge, president of the Airport Authority and Pasadena resident, “this suggests that our original estimates back at the beginning of the fiscal year for the amount of reduction that we would be suffering in passenger levels for the third and the fourth quarter may well have been optimistic. And we are, I think, less likely to meet those than we’d hoped.”
The decline in air travel has had a significant effect on the airport’s finances, though with multiple federal grants — including, now, a stimulus package that allocates $8 billion to airports — officials are hoping to avoid dipping into its reserves. And airport officials may need those funds to help weather the pandemic for several more months.
Kathy David, the deputy executive director of finance and administration, told commissioners that travel will likely remain negatively impacted at least through June, the end of this fiscal year.
“Once again, we’re going to be very conservative on our … projections for the next six months,” she said.
Operating revenues for the 2019-20 fiscal year were more than $5 million less than the same figure for the 2018-19 fiscal year, according to a financial report from the Airport Authority. The airport performed better than expected during some months of the current fiscal year, though still far below pre-pandemic levels.
For example, in December, operating revenues came in at nearly $2.2 million more than was budgeted. But at about $17.5 million, revenues were still half of what they were in December 2020.
While airlines have either slowed or — as in the case of JetBlue Airways — completely halted operations at the Hollywood Burbank Airport, federal carriers have upped cargo transport. Total air cargo last year increased by about 6.7% compared to the year prior, buoyed by increased shipments with Federal Express and the United Parcel Service.
David explained the airport has slowly drawn funds from its allocation of the Coronavirus Aid, Relief and Economic Security Act, saying in February that roughly $12.1 million remained. Another federal program for airports was authorized in December; the Hollywood Burbank Airport is expected to receive about $6.4 million from that.
The Los Angeles International Airport is seeing a similar decline in passenger activity, David said, adding that leisure travel is anticipated to recover sooner than business travel. But that recovery may not be dramatic.
“We may see a little bit of a spike in leisure travel once passenger confidence returns and there’s pent-up demand to get out and do a few things, and [then] that may level off a little bit,” she explained.
Continuing vaccine distribution could encourage passengers to return to airline travel, David said. That, in turn, could increase the frequency of flights.
NEW AIRLINE LANDS
Airport officials also recently announced that Texas-based Avelo Airlines, a small and relatively new service, has signed an agreement to use the Hollywood Burbank Airport and is expected to begin operations in late spring or early summer.
Officials said the airline’s destinations had not yet been determined, but that they would update commissioners when more information was available.
Avelo Airlines, a subsidiary of Houston Air Holdings, Inc., also recently signed a lease for an airport hangar, primarily for aircraft ground service equipment maintenance.