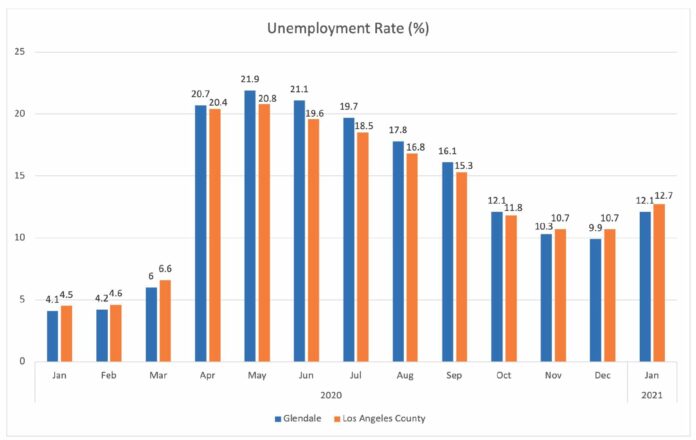 The unemployment rate in Glendale saw a major increase in January, according to newly released data, coinciding with renewed industry restrictions that have since been rolled back.
The California Employment Development Department recently reported that local unemployment rose from 9.9% in December to 12.1% in January. It represented a 12.2% increase in the number of unemployed workers, from 9,800 to 12,000. About 2,000 fewer residents reported working that month, putting the city’s total employment at 87,100.
However, the city’s labor force — the number of people either currently working or looking for a job — increased from 98,800 to 99,100 after two months of steady losses.
The increase in Glendale’s unemployment rate was the highest one-month jump the city had seen since the pandemic began. The rate has been steadily falling since May, though it has yet to reach its pre-pandemic level of roughly 4.2%.

Glendale saw a slightly higher swell in unemployment than the county, whose unemployment rate has seen a similar fluctuation as many of its cities. Los Angeles County experienced a jump in its unemployment rate from 10.7% to 12.7% in January, representing nearly 105,000 job losses. Like Glendale, January marked the county’s first major increase in the figure since March.
Since the preliminary data was collected in mid-January, it does not reflect the reversal of restrictive state and county health orders, which were implemented in response to rising coronavirus cases and hospitalizations.
Officials have rolled back those health orders since late January. On Monday, indoor dining resumed in many California counties, including L.A., at 25% restaurant capacity. Movie theaters, museums, gyms and other locations have reopened with similar restrictions, while retail stores had their capacity caps increased to 50%.
A data release for February will likely capture some earlier rollbacks, such as the return of outdoor dining, when the EDD publishes in the information later this month.
Statewide, the EDD reported, unemployment dropped slightly from 9.3% in December to 9% in January. But 70,000 fewer workers were employed.
The department’s unemployment data was not seasonally adjusted, meaning it did not account for regular changes in employment that occur during holiday seasons, school breaks and other expected periods.