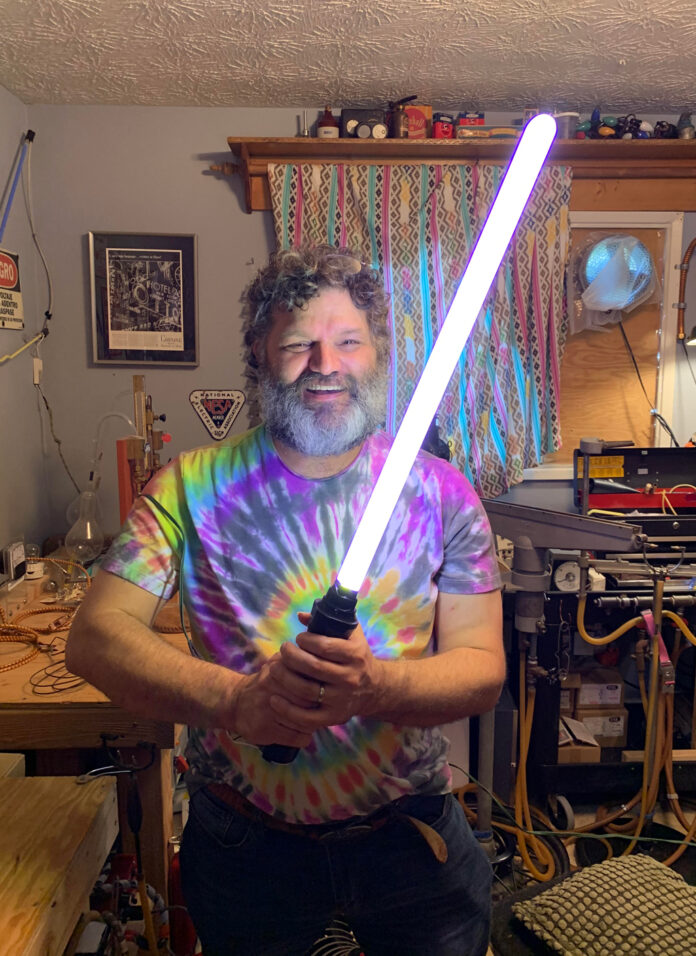 The Museum of Neon Art continues to offer free “Out of the Fire – Artist Talks” via Zoom at 6:30 p.m. Fridays, with past talks being archived on the museum’s website.
These talks are specially designed for an interactive Zoom experience, according to MONA. Since launching on Feb. 19, the program has attracted a worldwide audience and enables the audience and artist to interact with each other in the chatroom. Artists from across the country provide a presentation about their career and artistic process, followed by a lively dialogue moderated by MONA.
“The ‘Out of the Fire – Artist Talk’ format feels like having a show and tell with some of the most brilliant artists in neon, electric and kinetic art today,” MONA Executive Director Corrie Siegel said in a statement. “It has been a delight to use the democratizing medium of Zoom to have candid conversations with our community about technique, overcoming personal trauma, neon history, and collaboration.”

Upcoming guests include:
• March 26 – Robert Haus, whose interest in neon dates to his childhood and now restores antique neon signs alongside the neon shop equipment he collects.
• April 2 – Chris Raley, who is a scale model artist specializing in vintage neon signage. He is based in Fresno, but he makes replicas of signs from all around the world.
• April 9 – Ginger Quintanilla, also known as Ginger Q, who takes visual influence from her memories of growing up in Guadalajara and Los Angeles in crafting her artwork. Having studied at Syracuse University, École nationale supérieure des Beaux-Arts and the California Institute of the Arts, she utilizes vinyl, plastic, neon and metal in sculptures, large-scale installations, performances, film, photography and design.
• April 16 – Ray Howlett, whose pioneering work in light and sculpture is in museum collections throughout the United States. Since the late 1960s, his work has been closely associated with the Light and Space movement. Howlett’s sculptural forms transform as the viewer moves around the pieces, in his words, creating an “optically expanding space.”
• April 23 – Lily Reeves, who in her performance pieces “position the audience as the performer, creating a space for viewers to undergo meaningful gestures that have an impactful and transformative effect on the psyche,” according to MONA. The Alabama native studied at Alfred University and Arizona State University and has been awarded the NOVA Emerging Artists Award from the FRESCO foundation and the SAXE Emerging Artist Fellowship from the Glass Art Society.
“One of the most exciting educational events offered by museums is the opportunity to meet artists and learn more about their works,” MONA Curator of Education and Engagement Ani Mnatsakanyan said in a statement. “We are bringing that same experience to guests in a modified, digital format. A virtual artist talk also allows new audiences to connect with MONA who may not have had the opportunity to participate in our in-person artist talks previously.”
Tickets for Zoom artist talks are free. For more information, visit neonmona.org.