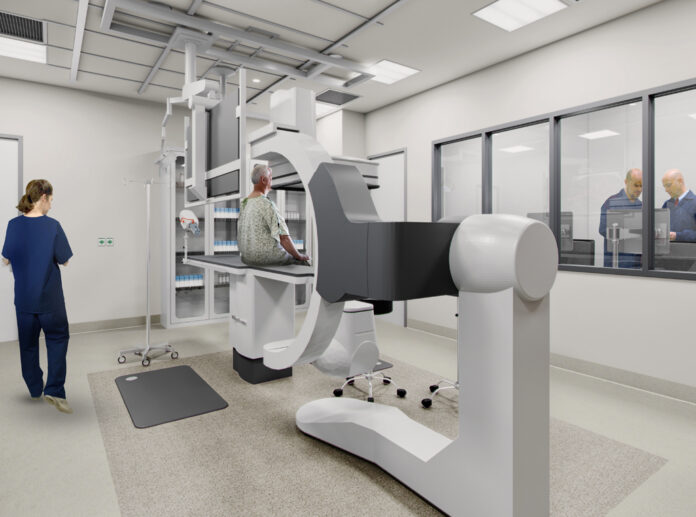 He left the actual destruction to the professionals, but Rod Hanners, the interim CEO of Keck Medicine of USC, officially broke ground — er, wall — Thursday last week on what will be a new IR cath lab at USC Verdugo Hills Hospital.
Before taking the ceremonial swing with a sledgehammer, Hanners touted the IR cath lab — short form for interventional radiology catheterization laboratory — as being a game-changing addition to the Glendale-based hospital’s ability to treat cardiovascular issues. To say the least, it’s an important ability to have — cardiovascular diseases are the top cause of death worldwide, killing nearly 18 million annually according to the World Health Organization.

“One in every three people will die from this,” explained Dr. Armand Dorian, chief medical officer and interim CEO of USC-VHH, “so it is obviously important that we have this.”
Cath labs use imaging equipment to visualize the body’s arteries and blood vessels, as well as the heart and its chambers, to assist with relevant surgical procedures, which are especially delicate operations. Presently, doctors at USC-VHH and those with privileges at the hospital must refer their patients here to other institutions when such technology is needed.
Crucially, any emergency patients in need of cardiovascular imaging have to also be sent elsewhere, on a trip that can take anywhere from 30 minutes to an hour. Dorian said technology and skillsets are obviously important factors in providing quality medical care, but it won’t always matter if a doctor doesn’t see a patient in time.
“The truth is, the most important factor is the time of delivery of care,” he said at last Thursday’s “wall-breaking” ceremony. “You are fortunate in this community now to have a cath lab you won’t have to drive an hour for. It will literally be minutes away, and minutes count.”
Donors are helping amass the funds for the cath lab, which will take around a year to add to the hospital and cost $20 million. There will actually be two such units along with a centralized control room installed at USC-VHH, which since being acquired by Keck Medicine has seen a number of technological upgrades. The lab will take over a currently existing operating room and three “underutilized” rooms in the hospital’s radiology wing.
It represents the final groundbreaking here for Keith Hobbs, who departed as CEO this month after five years at the hospital.
“He’s been able to turn this place around to the point where we are achieving one of the biggest milestones this hospital has ever had,” Dorian said of Hobbs’ tenure.
Sue and Steve Wilder, representing the USC-VHH Foundation, said the project represented a personal victory for them. Two decades ago, Sue Wilder said her 49-year-old brother succumbed to a heart-related ailment while at a hospital in Missouri that lacked the necessary equipment to conduct a timely cardiovascular evaluation.
The Wilders are among the lead donors who helped raise $1.3 million for the project, while the foundation is tasked with generating another $3 million.
“When we finally heard that this was going to become a reality at Verdugo Hills, we just jumped at the opportunity,” she said. “We know it’s going to save so many lives.”