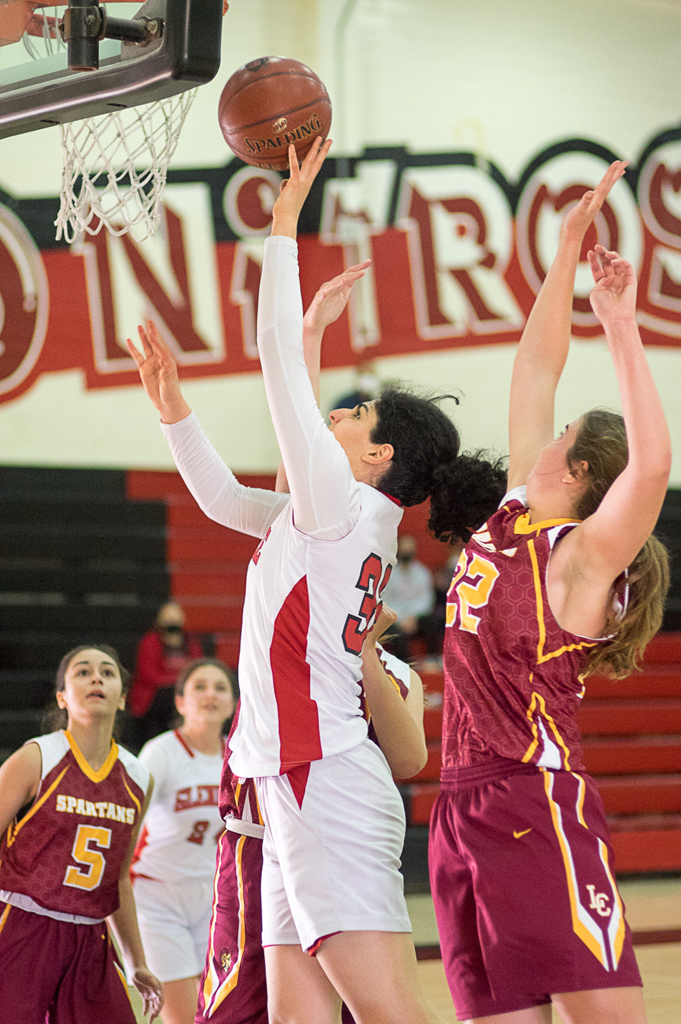 The Glendale High School girls’ basketball team allowed 12 three-pointers and fell behind by double digits early en route to a 52-27 nonleague loss to La Cañada on Thursday.
The Nitros made just 10 field goals throughout the entire game, a total nearly matched by Spartans guard Bethany Lo, who hit seven three-pointers to finish as the game’s leading scorer with 21 points.
Sarine Kaloghlian led the way for Glendale (0-2 record) with 10 points. Carmen Avedian had five while Arec Orujyan and Cherilyn Legaspi each scored six.
“We’re getting shots, [but] they’re not going in,” Glendale head coach Tadeh Mardirosian said afterward.

On defense, La Cañada’s crisp passing left the Nitros on their heels. The Spartans outscored the home team 18-8 in the first quarter behind Lo’s five made three-pointers.
Glendale, meanwhile, mustered 15 points in the first half, which came primarily from Avedian and Legaspi.
“A lot of our athletes have not played in over a year so it’s been difficult to get the wheels back. Conditioning is a huge issue,” Mardirosian said.
He also criticized his team’s lack of competitiveness but blamed that on the yearlong COVID-19-caused layoff as well.
“I think a year of the pandemic has really mellowed out a lot of the athletes and there isn’t enough fire the way we’ve had it in the past,” Mardirosian said. “So hopefully as the week goes on and we practice a little more, we can get the fire going.”
Glendale did show some life late in the second half. The Nitros held La Cañada to just six points in the fourth quarter thanks to numerous turnovers caused by the Nitros guards’ active hands and ability to read and cut off passing lanes. Mardirosian credited Legaspi as well as his two freshmen, Avedian and Natalie Keshishyan, for the effort.
“They really started buzzing,” Mardirosian said. “The guards really did their job well defensively.”
The Nitros will get another day of practice before heading to South Torrance for their third game on Monday, and their coach has no illusions about the team’s current state.
“We’re at the bottom right now,” Mardirosian said, “And we can only go up.”

Jambalaya and Hoops Spice Up a Chilly Night