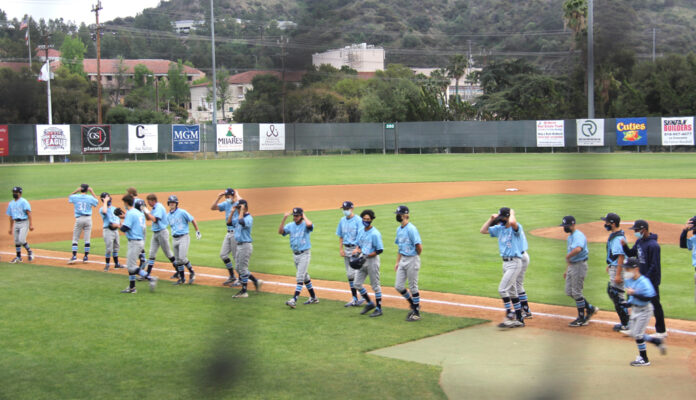 Crescenta Valley High School senior Luca Cueno went 3 for 3 with three RBIs to help lead the Falcons baseball team to an 18-0 rout over Hoover High in the Pacific League opener for both schools on Tuesday night at Glendale’s Stengel Field.
CVHS teammates Rowan Respecio, Mathew Ruf and Chris Barrena each collected two hits for the Falcons, who improved their overall record to 4-5.
Meanwhile, senior pitcher Noah Maddox did not allow a run or hit in three innings of work to collect the win. Sophomore Connor Campbell and senior Elliott Lin each pitched one shutout inning in relief in the game which was ended early because of a five-inning mercy rule.

Heading into the game with just 10 varsity players, the Tornadoes (4-2 overall record) fell behind, 12-0, in the third inning.
“I just tell them to fight for 21 outs, play the whole game until it is over,” said Tornadoes coach Derek Parker.
Showing no quit, Hoover strung together a base on balls and then a hit by Will Mcleod in the fourth inning to put runners on first and third with two outs. However, CV pitcher Campbell struck out his third batter of the inning to preserve the shutout bid.
Senior Emilio Velis, senior Evan Aceytuno and junior Jameson Ferraro each collected one hit and a team-high three RBIs for the Falcons. Teammates Chris McCollum, Brenden Pehar, Jacob Deno, Noah Maddox, Robert DeLeon and Noah Shorkey had one hit apiece.
“It was nice that we got everyone in today and got everyone to contribute. That’s huge because everyone works hard in practice,” said Falcons head coach Phil Torres.