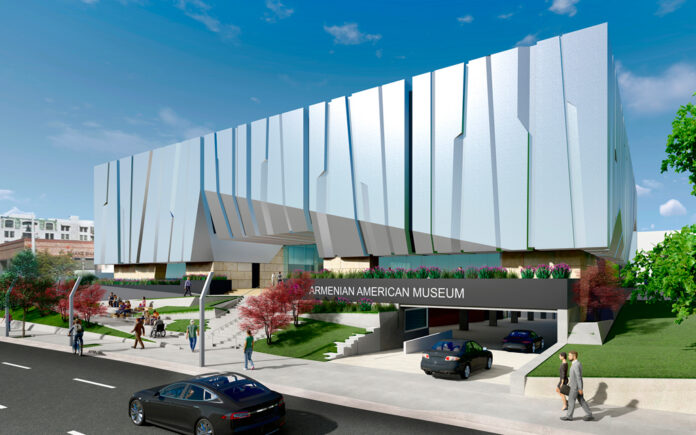 Officials with the long-awaited Armenian American Museum expect to break ground this summer, the organization announced this week.
Along with that act, for which a specific date has not been set, the city will begin renovations to Central Park, where the museum is to be located and its managing organization has secured a lease for up to 95 years. Designers for the museum submitted blueprints to the city this week for a plan check, and the museum’s board intends to name a construction firm by spring.
“Everyone’s pouring their heart and souls into the project,” said Shant Sakahian, executive director of the museum, in an interview. “It’s definitely bigger than any one organization or person involved in the project, and it’s definitely been years in the making.”

The two-story museum, at 50,820 square feet, will include a grand lobby, auditorium, learning center, demonstration kitchen, gift shop and administrative offices on the first floor, according to the board. Permanent and temporary exhibition gallery space and archived collections will fill the second floor. The structure will sit atop a one-level, semi-subterranean parking garage.
The Armenian Genocide Centennial Committee Western USA identified the museum as its signature project in 2014 and established its board of trustees the next year. After also considering Pasadena, Burbank, North Hollywood and Los Angeles’ Little Armenia, the board chose Glendale as the museum’s home and struck the lease agreement with the city in 2018.
A construction schedule won’t be finalized until after a firm is hired, but Sahakian estimated that it would take two to three years to finish the building.
“We’re told that opening museums from start to finish usually takes around 10 years,” said Berdj Karapetian, executive chairman of the board, in an interview, “so we’re still on track.”
The lease agreement, which starts at 55 years but could be extended to 95, places the museum in Central Park, abutting the Central Library, the Museum of Neon Art and the Americana on Brand shopping center. The board is being assessed a ceremonial $1 annual lease payment. Additionally, the City Council this month waived the $671,000 in permitting and plan check fees for the endeavor.
The city’s $18.5 million revamp of the park will coincide with the museum’s construction and will add a lawn spanning the library and museum, an outdoor amphitheater, a kids’ area with playgrounds and splash pads and other outdoor recreational amenities.
The museum’s board of trustees is composed of the Armenian Catholic Eparchy, the Armenian Cultural Foundation, the Armenian Evangelical Union of North America, the Armenian General Benevolent Union Western District, the Armenian Missionary Association of America, the Armenian Relief Society Western USA, the Nor Or Charitable Foundation, the Nor Serount Cultural Association, the Western Diocese of the Armenian Church of North America and the Western Prelacy of the Armenian Apostolic Church.
In addition to programming and exhibits that chronicle the history of the Armenian nation — a history that includes the genocide carried out against Armenians by the Ottoman Empire and a territorial dispute over Artsakh born of Soviet colonialism that erupted into war in 1991 and again last year — the museum will dedicate space for programming and educational opportunities for other cultures and groups, Sahakian said.
“We’re excited,” added Sahakian, who also serves on the Glendale Unified School District Board of Education. “It’s going to have a great deal of value for members of the community for all ages. It’s great that we’re going to be able to add such a cultural asset to the city of Glendale.”
The board has raised more than $14 million for the project so far, including $8 million in state funding and $1 million from the county. There will be additional fundraising opportunities later this year for the project, which arrived at this stage despite the upheaval of the coronavirus pandemic and the Armenian diaspora’s focus last year on relief efforts for those affected by Azerbaijan’s offensive against Artsakh.
“The museum was going to be a testament to the resilience of the Armenian community and to the strength of our nation in the United States, which always bounces back,” Karapetian said. “Now we’ll be able to see that being expressed and demonstrated for the groundbreaking of this museum.”