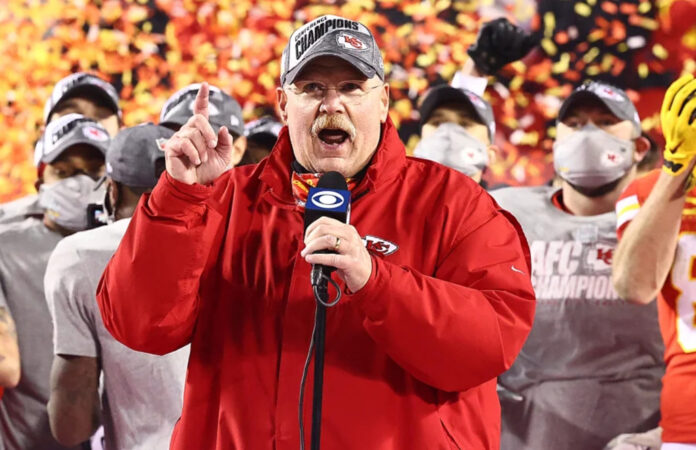 Glendale Community College legend Jim Sartoris keeps in touch with many of his former players and plans on texting one in particular very soon.
“Of course, around this time I’m wishing him good luck,” he said.
The former Vaquero to whom Sartoris referred is none other than National Football League head coach Andy Reid, who guided the Kansas City Chiefs to a 38-24 victory over the Buffalo Bills to claim a second consecutive American Football Conference championship last Sunday.

“I’m proud of these guys behind me here,” Reid said during the trophy presentation after the game. “They did a phenomenal job. Our hats go off to the Buffalo Bills and the great job did they did all year. We got the Lamar Hunt Trophy back in Kansas City, and we got to go get the big one, baby.”
Reid — nicknamed “Big Red” — will look to claim a second consecutive Super Bowl crown on Sunday, Feb. 7, when the Chiefs square off with the Tampa Bay Buccaneers, who defeated the Green Bay Packers to capture the National Football Conference title last Sunday.
“Just to go back-to-back is amazing,” said Sartoris, a GCC Hall of Famer who coached Reid for two seasons from 1976-1977. “Just think about the whole history of the NFL and how many coaches actually got the Super Bowl just once.”
The win was certainly historic for Reid, who is now one of 12 coaches in NFL history with at least three Super Bowl appearances as a head coach — his first being in 2005 with the Philadelphia Eagles. He also tied Hall of Famer Joe Gibbs for fourth-most playoff wins with 17. The only coaches ahead of Reid are Bill Belichick (31), Tom Landry (20) and Don Shula (19).
Reid’s success and accolades don’t surprise his former GCC coach. Sartoris always marveled at his football IQ and work ethic, especially when he began his career as a coach.
“He’s the kind of guy that when he left us, you just had a feeling that because of his intellect and attitude he would go on into any career and be successful,” said Sartoris. “He loved football. He would always come by my office and we’d trade X’s and O’s and some of things he was doing with his offenses. It didn’t surprise me that he moved up the ladder.”
Before becoming a successful NFL coach, Reid was an offensive lineman at GCC for two years and helped the Vaqueros win the 1977 Western State Conference championship, earning him all-conference second-team honors.
“He was an extremely intelligent offensive lineman,” Sartoris recalled. “He was very serious about being successful and really was a leader. He was a big part of our success.”
Reid, who attended John Marshall High School in Los Angeles, was also a place-kicker for Glendale College and was surprisingly good in the special teams role. He was later inducted into the GCC Hall of Fame as an individual and a member of the 1977 championship squad.
“He kicked with the old square toe. It wasn’t soccer style. It was straight on,” Sartoris said. “He was very good, very accurate and consistent.”
Two successful campaigns at Glendale helped Reid land a spot on the Brigham Young University football roster, and he played for the Cougars from 1978-1980. Reid graduated in 1981 and became a graduate assistant for BYU before moving on as an offensive line coach at San Francisco State. He took on a similar role at Northern Arizona, Texas El Paso and Missouri.
Reid’s big break came in 1992, when he was hired as an assistant coach by Green Bay. Coincidentally, it was the same year Brett Favre became a member of the historic NFL franchise. Reid helped the Packers win a Super Bowl in 1996 as assistant offensive line and tight ends coach.
His stock was rising in the NFL, and the Philadelphia Eagles took a chance in hiring Reid — who had no experience as a coordinator — as head coach in 1999. He was the second-youngest head coach in the NFL when he was hired, and he led the Eagles to that Super Bowl appearance a few seasons later.
Former GCC athletic director and football coach John Cicuto visited Reid in Philadelphia and was impressed by the practices and team meetings hosted by his former player.
“I was going [to Philadelphia] during the spring during [organized team activities],” Cicuto said. “I would bring some of my coaches with me and we’d just watch and get access to some of the team meetings. He was short and to the point, and I think players liked that. He has such a passion to coach this game and really cares for everyone, all the players.”
In 14 seasons with Philadelphia, Reid amassed a record of 140-102, including a 10-9 record in the postseason, and was hired by the Chiefs in 2015.
Kansas City has finished with a winning record every season under Reid, a streak Sartoris believes his former player can continue as long as quarterback Patrick Mahomes continues his level of play.
“Now this is his third [Super Bowl appearance], and he’ll have many more if he can keep that team together and that quarterback healthy,” the former GCC football coach and athletic director said.
The Super Bowl matchup is an enticing one with Mahomes — the 2018 NFL MVP —and Reid facing head coach Bruce Arians and 43-year-old quarterback Tom Brady, a six-time Super Bowl champion often referred to as the greatest of all time.
“What you see [in Tampa Bay] is a team that’s not making many mistakes,” Reid said in a press conference on Monday. “There is a high level of execution going on, offensively and defensively. [Brady is] playing at an extremely high level for somebody his age. It’s unbelievable for a 25-year-old to be doing what he’s doing, let alone a 43-year-old.”
As a football fan, Sartoris can’t help but admire Brady’s abilities and career, but he’ll definitely be rooting for his former player next Sunday.
“What a classic matchup,” he said. “You got probably the best quarterback that ever played the game going up against the new guy that is probably the best in the game right now. It should be a great game. Obviously, I’m pulling for Andy and the Chiefs.”
So will the GCC community.