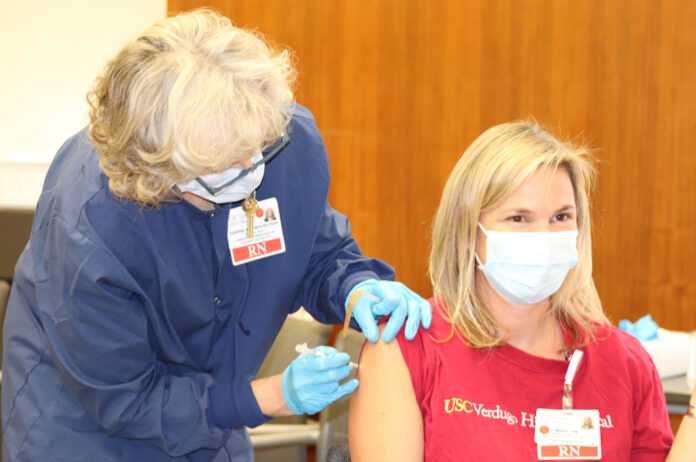 A sudden emphasis on extending COVID-19 vaccination opportunities to residents 65 and older in Los Angeles County may alter plans for a local hospital to begin inoculating Glendale Unified School District educators.
Nothing is set in stone, and the likelihood of further changes will probably grow as President Joe Biden’s administration settles in during the coming weeks. For now, however, the plan for USC Verdugo Hills Hospital to begin vaccinating GUSD employees against the virus starting on Jan. 30 has been paused. In an era of fast-breaking news, this change of plans came 24 hours after the GUSD Board of Education was briefed on the rollout.
“As with everything with COVID, there have been so many twists and turns,” said Mary Virgallito, associate administrator for quality and patient safety at USC-VHH, in an interview Thursday. “We’re just awaiting further guidance. We’ve done everything we can, including submitting a plan, so until the county activates us, we’re on standby.”

As recently as Tuesday this week, USC-VHH and GUSD were anticipating being able to start vaccinating district employees a week from today. The first round of vaccinations would continue for the following three Saturdays, after which the hospital would proceed with the second rounds of shots, likely running through March.
The hospital expects to use the Moderna vaccine, which spaces out the first and second shots by four weeks.
In comments to the school board on Tuesday, USC-VHH CEO Keith Hobbs seemed to anticipate that complications would crop up.
“We’re hoping between those two months, we’ll be able to cover all of the Glendale Unified School District teachers. Our only predication is that everything is evolving and moving rapidly,” he said Tuesday. “As of a week ago, we had pretty much a green light from the county that we could have receipt of those [vaccines] when we needed them.”
California’s initial round of coronavirus vaccines — mostly referred to as Phase 1A — targeted health-care workers throughout the state, including those at skilled nursing facilities and long-term residential care facilities. Some counties, including L.A., have recently entered Tier 1 of Phase1B, which at the time first opened up vaccines for those 75 and older.
The next group up after that included those “at risk of exposure” in education, child care, emergency services and food and agriculture.
Here’s where the confusion began: On Monday, Hilda Solis, chair of the county Board of Supervisors, issued an executive order Monday night directing the county to open up vaccinations to those 65 and older — a group initially scheduled to be up in Phase 1B-Tier 2 — even though all health-care workers have not yet been served. This order followed a sudden policy change by the Trump administration last week recommending that states now target those 65 and older.
The state altered its vaccination plan this week to reflect the changes.
Additionally, the county this week launched a handful of “Mega PODS” — drive-up point of distribution sites — that thus needed to be supplied. These sites include Cal State Northridge, Six Flags Magic Mountain, the Forum, the Pomona Fairplex and the county Office of Education.
“When they did that, vaccines were shifted to those pods,” Virgallito explained.
County residents in the applicable groups can sign up for vaccines by visiting publichealth.lacounty.gov/acd/ncorona2019/vaccine/hcwsignup.
The federal government ultimately decides states’ allocations of vaccines, after which state governments apportion them to counties, which handle the local distribution. State epidemiologist Erica Pan suggested this week that unless California’s share of vaccines increases beyond current levels (300,000-500,000 doses a week, she said), it might take until June to vaccinate the 65-and-older population.
“No one can go directly to Moderna or Pfizer and get vaccines,” Virgallito said. “That’s not how it works.”
The Los Angeles Times reported this week that L.A. County needs more than 4 million doses to cover both rounds of vaccinations to the 800,000 health-care workers here and the 1.3 million residents who are 65 and older.
At any rate, once GUSD employees are able to sign up for their shots, it’s likely most will do so. A survey returned by 56% — more than 1,900 — of the district’s employees indicated that 77% want the vaccinations, 16% did not and 7% remained unsure.
“They mentioned a variety of reasons — some said they were expecting, others said they’ve had allergies before or particular health concerns — but we are encouraged by the fact that there is such an interest,” Superintendent Vivian Ekchian said Tuesday.
In the meantime, it remains a waiting game.
“Hospitals stand ready to help,” Virgallito said, “but we have to be given that guidance — and vaccines — by the government and the county.”