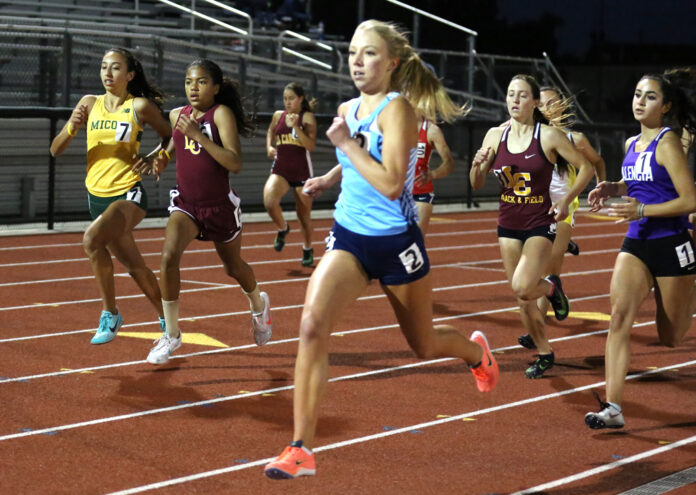 When it comes to running the 800-meter race, Crescenta Valley High School’s Mia Barnett has a simple approach.
“I’ve just kind of gone out hard every time,” the senior said. “Try to run a :62, :63 first lap and let my fitness, let my strength carry the second lap. Strategy-wise, I always take it out from the front and take the lead from the start and hopefully no one catches me.”
No one caught her at the Meet of Champions on April 24, when she clocked 2:07.31 for first place and a new personal record in the 800. And earlier that month, at the Laguna Beach Distance Carnival, no one came even close to catching her, as she ran a scorching 9:52.23 in the 3200.

Her 3200 time, along with her 4:41.32 1600, both rank first in the nation, according to athletic.net. She announced she will be running at the University of Virginia in the fall as a college freshman.
“All year long, we’ve been encouraging her that when she felt it was the right time, to take control of the race and to really push the pace,” said CV co-head coach Rob Evans. “And for a runner, that’s a really hard thing to do. It takes a lot of guts to be out there in the front. Everyone else is pacing off you, but I mean as a runner, that’s really fitness-wise where she belongs.”
It’s the first full track and field season at CV for Barnett. She transferred to Crescenta Valley from Sun Valley Village Christian ahead of last school year, but the season was dashed thanks to the onset of the coronavirus pandemic.
Now, she’s all-in with Falcons. She trains alongside the boys distance runners, and the coaches work closely with her to provide encouragement and workouts built around her goals.
“I think when you’re around Mia on a day-to-day basis, she’s very human,” Evans said. “The process to get there is one that every runner shares of moments of supreme confidence, moments of little mini moments of insecurity, moments where you feel really motivated, moments where it’s a hot day and you’ve gotta go run 12 miles and it’s just gonna stink out there.
“I think she’s normalized the hard things that when you step back, you’re like, ‘I can’t believe she did that,’ but when she did it, it seemed really normal,” he added.
In addition to having a new set of training partners, Barnett is embracing the team atmosphere at CV.
“I love watching everyone race and cheering them on,” she said. “That’s something I’ve been missing, just having that energy and having all your teammates cheer for you and you get to cheer your teammates on.”
Barnett says that between the three races she’s ran this season, the 3200 is probably her favorite at the moment, because it’s the result she’s most proud of.
According to co-head coach Mark Evans, being an elite runner in all three events is a rarity and something else she can take pride in.
“With Mia, she has such range,” he said. “If you look at the all-time list in California, you don’t really see too many of the girls that are the top 800 runners that were also some of the top 3200 runners or milers.”
In her freshman year, Barnett set goals for times to beat in each race. She’s met her goals for the 3200 and the 800, and now she’s striving to get her 1600 under 4:40. She also wants to set the national record in the 3200, something she’ll have the opportunity to do at the Arcadia Invitational, which begins on May 7.
“I think I’m just naturally a competitive person,” Barnett said. “I go into a race and I want to win and I want to improve from my time from before and I want to win by a lot. I think just my competitive nature is what challenges me in races.”