Falcons Down Nitros to Pick Up Fourth Victory 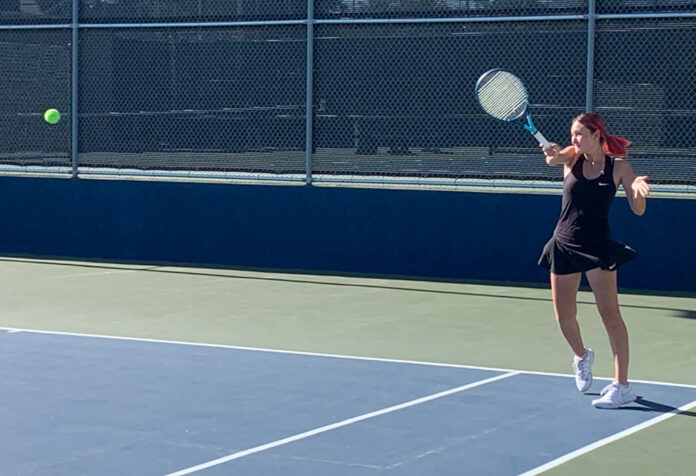 The brief spring 2021 regular season for Crescenta Valley and Glendale girls’ high school tennis culminated on Thursday as CV spoiled the Nitros’ senior day by a final score of 13-5.
The Falcons’ No. 1 singles and doubles players went undefeated, as did their No. 3 duo. Glendale had plenty of bright spots as well, though, including No. 1 singles player Celine Khachiki.
The Falcons improved their record to 4-1; the Nitros fell to 3-2 on the season.
Despite playing in their second match in as many days due to a rainout on Tuesday, the Falcons pushed through fatigue with their stars leading the way. Teleya Blunt, CV’s No. 1 singles player, continued her dominant 2021 season with a clean sweep in her three sets, 6-3, 6-1, 6-0. No. 2 Chloe Kim won both of her sets as well, 6-2, 6-3.

“Both of them are playing very hard this year, practicing hard. They’ve always performed well. They’re both very competitive; they hate losing,” CV head coach Alex Jang said. “It’s comforting knowing that we have two people that are gonna go out there and do everything in their power to secure wins.”
No. 3 singles player Amanda An went 1-1, splitting her sets 1-6, 6-0. Lexi Sheynin dropped her only set 0-6.
On the doubles side, No. 1 tandem Denista Georgiena and Sophia Labellarte made quick work of their opponents, winning their sets 6-0, 6-4, 6-0. No. 3 duo Karis Yun and Hannah Yoon also continued an impressive year of their own with a clean sweep: 6-1, 6-4, 6-3.
“I know that they’re a little sluggish today because we’re coming off of a match yesterday… for all of them to come out here and give it their all and perform as well as they are, it’s always good to see,” Jang said.
No. 2 doubles team Nicole Ouh and Yujin Lee lost both of their sets 3-6, 6-7.
It was a bittersweet day for the Nitros as they celebrated the final home match of their seniors, including the last remaining members of the fall 2017 squad that captured the CIF championship. Friends and family put up posters near Glendale’s tennis facilities honoring the eight seniors, including Khachiki, Grace Anderson, Jean Doody, Suzie Poghosyan, Momo Guzman, Melani Matian Konaraki, Eleen Garemanian and Remi Akopians.
Khachiki went 3-6, 6-0, 6-1 in her three sets, becoming the only Glendale singles player to win multiple sets on Thursday. No. 2 singles player Ani Harutyunyan won one set, going 1-6, 2-6, 6-2. Garemanian, Glendale’s No. 3, went 3-6, 0-6 in her two sets while Natalie Mirzakhanyan dropped her only set to Blunt, CV’s No. 1, 0-6.
Glendale’s No. 2 doubles court proved the good luck charm for the host Nitros in that area, as both of their set wins on Thursday came on that court. First, No. 2 duo of Guzman and Lizzy Davtyan pulled away late in their opening set to beat their CV counterparts 6-3. Then, the No. 3 tandem of Akopians and Doody battled CV’s No. 2 to a standstill after giving up a late lead. After some great back-and-forth play, Akopians and Doody finally got over the hump on the third tiebreak to win the set 7-6.
Guzman and Davtyan dropped their other set 4-6, while, Akopians and Doody dropped theirs 3-6. The Nitros’ Poghosyan and Son Amroyan dropped their set 4-6 while Konaraki and Anderson were shut out in theirs by CV’s No. 1 doubles squad. Glendale’s No. 1 duo, Sarah Davtyan and Nahnor Ghazarian, were swept in all three of their matches, 0-6, 2-6, 1-6. Still, head coach Jim Jenks is proud of how his team performed.
“They showed a lot of grit,” Jenks said. They competed for every point. The scoreboard doesn’t show how hard we competed today.”
Jenks also expressed thankfulness for the chance to honor his seniors and for the chance for his seniors to pass on their wisdom to the next generation. As recently as four months ago, the possibility of even having a season to do so seemed out of reach.
“It was huge,” Jenks said. “One of the things we talked about with the girls today was that [the season] came to fruition. It came and went pretty fast, but it was awesome to be able to celebrate the seniors today.”