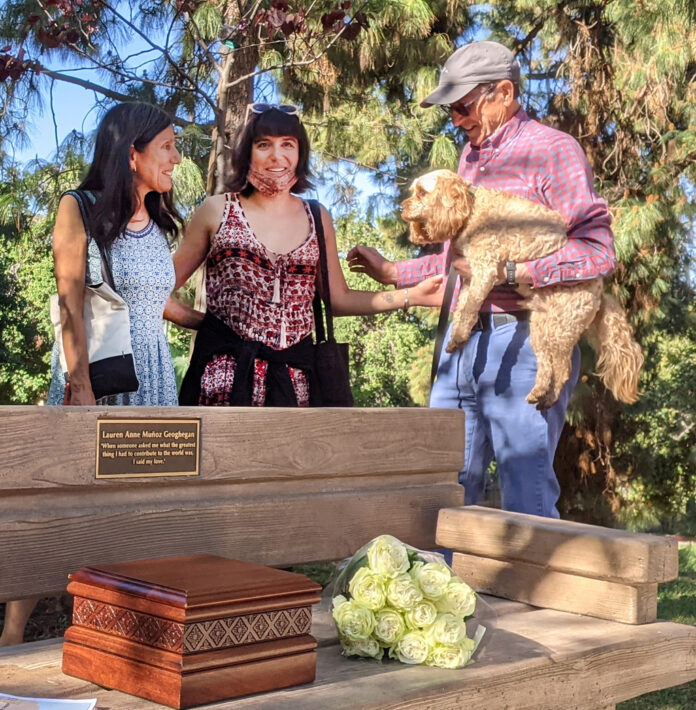 Three years ago this week, longtime Glendale residents Bob Geoghegan and Elvira Muñoz were visiting their daughter, Lauren, and her boyfriend in Montenegro.
As he fondly recalled on Thursday, Geoghegan said they’d swam in the Adriatic Sea, just off the coast of the picturesque Balkan nation. Less fondly, he then explained that this would sadly be the last time they would see their daughter — the couple would be slain months later, while biking in Tajikistan, during an extremist attack that shocked the world at the time.
This week, the city memorialized the enterprising, curious young woman with a commemorative bench and accompanying eastern redbud tree at Brand Park, where a young Lauren Muñoz Geoghegan spent her formative years meeting her friends on the playgrounds, playing soccer in the fields and hiking the foothills crowning the city park.
“Particularly on weekends,” Bob Geoghegan explained, “we would all come here and have a great time. Lauren, with her wonderful spirit, made it a wonderful time.”

Her family hosted their own commemoration of the memorial this week, inviting friends to welcome the newest addition to the park, where it sits on the south side of the playground equipment to the park’s east.
“I’d like to just summon Lauren’s spirit on the bench here,” Muñoz said Thursday, gesturing then toward the playground equipment and crowd, “to be here with all of you.”
The City Council decided in November that it would create the memorial after Councilman Dan Brotman brought the request to the city on behalf of the family. The concrete bench was installed this week and the tree was being planted as everyone gathered Thursday morning.
Lauren and her boyfriend, Jay Austin, embarked on an international backpacking and biking journey in 2017, starting in South Africa and aiming to live on no more than $15 a day. Their adventure brought them north through Africa, to Italy, through the Balkans and Turkey and then through Central Asia. They chronicled their trip with posts and photos on a blog, Simply Cycling.
This journey tragically ended on July 29, 2018, as they biked alongside other couples from Switzerland and the Netherlands on a highway in Tajikistan. Five militants, who would later pledge allegiance to the Islamic State, rammed the cyclists with their car and then attacked them with knives. Lauren, Austin and two of the other cyclists were killed, and Tajik authorities later apprehended the assailants.
The story was later featured on the New York Times’ video series, “The Weekly.”
Last summer, Bob Geoghegan said they began to consider how to more formally preserve their late daughter’s “memory and spirit” here in Glendale. Brand Park was a natural draw, so they set in motion the idea that reached city officials.
“Before we knew it, we were meeting with people, walking around the park and thinking where we might put the bench and tree,” he said. “We knew this was the place.” — he pointed to the ground where the bench was — “For me, the memories came back very quickly.”
A plaque on the bench includes a key portion of a letter that Lauren wrote to her mother, uncovered from one of the boxes of her possessions at their home. (“We have many boxes that we have not opened yet,” Muñoz noted somberly.) The plaque reads: “When someone asked me what the great thing I had to contribute to the world was, I said my love.”
“That was Lauren, for sure,” Bob said, with an inflection of pride.
In the background, Lauren’s parents are also working on a possible similar memorial at Georgetown University in Washington, D.C., where she studied government, Spanish and Arabic. After attending Keppel Elementary School, Lauren joined nearby Immaculate Heart for middle and high school. Immaculate Heart later adopted a need-based scholarship in Lauren’s memory.
Some family friends spoke or read poems Thursday as part of the dedication. Some brought flowers, which lay on the bench alongside a box containing Lauren’s ashes.
“I look forward to coming here, sitting here and thinking about Lauren and how she affected my life,” said Laura Sarley, whose children befriended the Geoghegan children at a young age.
“I know I’m better for having known Lauren and Bob and your family,” Pat Camp told Muñoz. “She is still with us.”
Before gathering for photos and then departing, Muñoz noted a small discovery she’d made earlier in the week, when she and her husband visited the park and happened upon the city crew installing the bench.
Someone had drawn a small heart into a corner of the concrete, before it hardened.