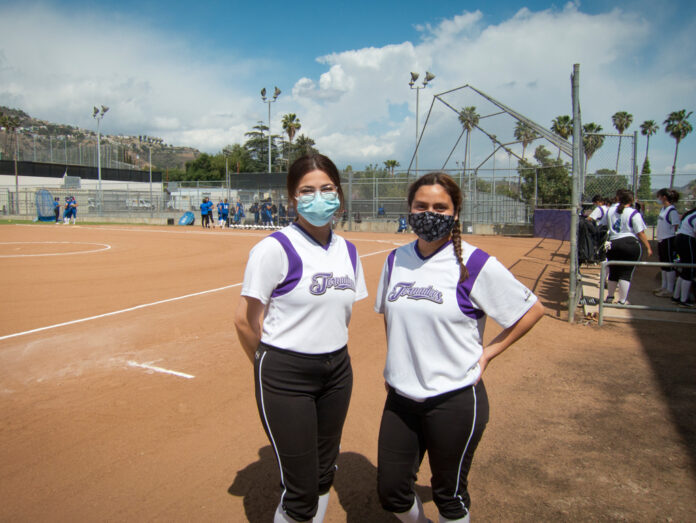 There has been a litany of lopsided scores so far in this season of Pacific League softball, and when Hoover and Burbank High matched up for the first time it proved to be another one.
After the opening inning, the visiting Bulldogs poured it on the overmatched Tornados and cruised to a 25-4 win Tuesday afternoon in a Pacific League game that was shortened to five innings via the mercy rule.
“We are really excited to win,” Bulldog Lily Stell said. “We worked as a team and we have been working very hard in practice. I’m just really proud of all the girls.”

The teams were tied at four after the first inning, but Burbank (5-5, 3-1 in the Pacific League) scored the final 21 runs of the truncated contest.
“In the beginning we struggled a little bit, but then we came together as a team,” Bulldog Elizabeth Zamora said.
Burbank had 10 different players drive in at least one run. Samantha Buckley had four RBIs. Zamora drove in three. Stell, Belinda Lujano and Hannah Zacariaz each pushed two across. Leilah Hernandez, Eliza Bowren, Kara Valencia, Sasha Quintanar and Leela Von Der Hey each were credited with one RBI.
Against Hoover (0-4 overall and in the Pacific), three Bulldog pitchers combined to allow just two hits. Lujano, a freshman, started the game and allowed all four Hoover runs.
“We wanted to see what our first pitcher [Lujano] had because she hadn’t pitched all year for us, so we started her,” Bulldog coach Melissa Sanchez said.
Lujano had gotten things started right in the batter’s box, blasting a leadoff home run over the right/center field fence to begin the game as part of a four-run top of the first.
Von Der Hey pitched the second inning and wriggled her way out of a bases loaded jam to record a scoreless frame. By the third inning the Bulldogs were done tinkering and regular starter Grace Workman, also a freshman, pitched the final three innings, striking out six and not allowing a hit.
The Bulldogs scored multiple runs in all five innings played. In total, the Bulldogs swatted 16 hits, drew nine walks and benefited from seven Hoover fielding errors.
The visitors scored three runs in the top of the second inning to take the lead for good. Lujano, who had reached on an error, scored on a wild pitch from Hoover pitcher Desiree Guzman to make the score 5-4. Soon after, Zacariaz plated a run for the second time in the contest with a sacrifice bunt. Valencia followed that with a triple into center field to score Zamora, who had reached after being hit by a pitch.
The top of the third inning saw the Bulldogs put five more runs on the board. The biggest blow of the inning was a two-run single off the bat of Zamora.
With the game well in hand, Burbank erupted for 11 runs in the fourth. The first two came on a Buckley two-run home run to left field. The final five came on a string of three extra base hits that started with Buckley driving in her second and third runs of the inning with a double.
Guzman drove in two runs for Hoover with a single in the four-run first. The only other hit was also a single coming from Samantha Coromac.
“What went well is that I don’t think the girls ever gave up,” Hoover coach Rich Henning said. “It’s a determined group.”