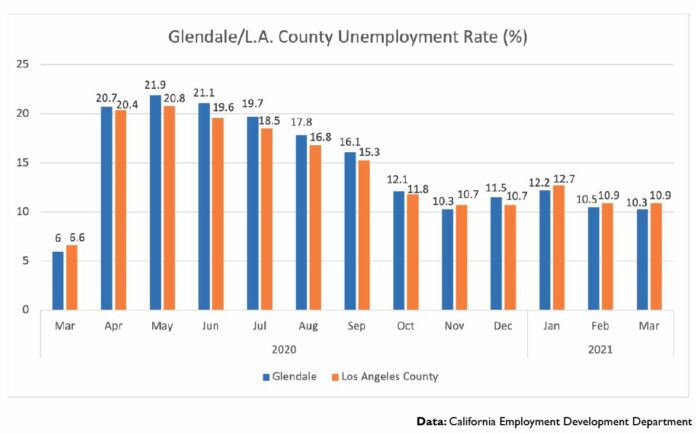 Glendale’s unemployment rate last month was significantly higher than it was in March 2020, according to state data, though the gap continues to narrow.
The city’s unemployment rate fell from 10.5% in February to 10.3% in March — tied with November for having the lowest rate since the beginning of the pandemic — according to preliminary data from the California Employment Development Department, reflecting a decrease in the number of unemployed workers from 10,900 to 10,600.
However, the city’s labor force — the number of residents either working or actively looking for work — fell by 700 people while its number of employed residents dropped by 400.

Los Angeles County reported similar changes, though its unemployment rate remained flat between the two months at 10.9%. The number of unemployed workers in the county fell from about 556,900 to 555,100, but its labor force also shrunk by nearly 23,000 residents.
Glendale’s unemployment rate in March 2020 — when sectors had only just started to close in response to the pandemic — was 6%, representing 6,100 unemployed workers. The county’s rate was 6.6%, reflecting 327,500 workers.
In February 2020, those percentages were 4.2 for Glendale and 4.6% for L.A. County.
Nonetheless, Glendale’s unemployment rate has continued to decline during most months since it peaked at 21.9% in May. The rate saw bumps in December and January due to the issuance of restrictions that have since been lifted.
L.A. County’s entry into the red tier in the state’s reopening plan occurred shortly after the EDD collected March 2021 data. Because of this, the resumption of indoor dining and the lifting of capacity limits on many business types are not reflected in the department’s report.
Gov. Gavin Newsom changed the state’s reopening rules last month to make it easier for counties to enter the less-restrictive tiers, which are color-coded, after 2 million vaccines were administered across California.
The EDD’s next data release, scheduled for mid-May, will include employment adjustments made after L.A. County entered the orange tier at the end of March.
In California, the unemployment rate fell from 8.5% in February to 8.3% in March. Leisure and hospitality fields — including performing arts, restaurants and hotels — continued to see the most significant job gains after Newsom lifted his statewide stay-at-home order that prohibited outdoor dining. Retail and wholesale stores also saw significant employment increases.