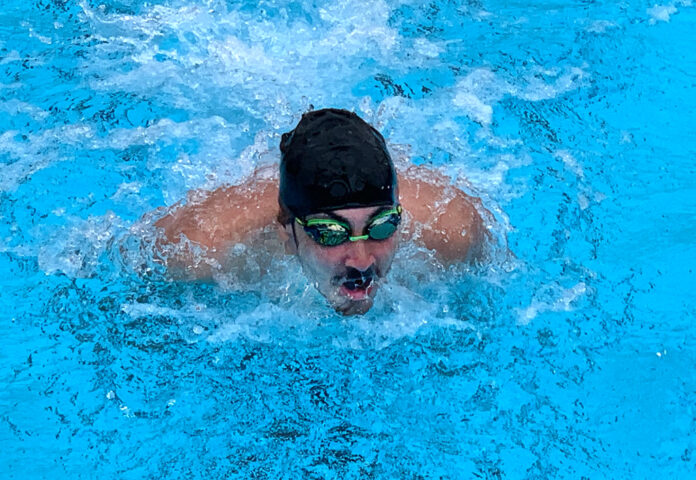 Burbank and Glendale high schools’ swim teams kicked off a new era at Glendale High’s revamped swim facilities, christening the new pool with a split dual meet on Thursday.
The host Nitros beat the Bulldogs in the girls’ meet, 103-60, but Burbank returned the favor on the boys’ competition, 93-75. Both coaches expressed pride in how their teams performed despite very limited practice time to due to the adjustments to the season schedule forced by COVID-19 regulations.
Glendale’s girls jumped out to a commanding lead in the first event of the day, the 200-yard medley relay. The Nitros’ No. 1 group, consisting of Ariadne De Leon, Liana Pooladi, Nicole Avedisian and Kristina Ter-Matevosyan, and No. 2 group, featuring Ashley Hernandez, Marissa Briones, Angela Markarian and Chloe Dobie, took the top two spots, respectively, to give their team a 12-2 advantage.

Glendale piled on from there, as De Leon, Ter-Matevosyan and Markarian took first, second and third in the 200 freestyle, Avedisian won the 200 individual medley, and Ter-Matevosyan won the 50 free. Pooladi, Briones and Hernandez also picked up individual wins in the 100 backstroke, 100 breaststroke and 100 butterfly, respectively, and the Nitros also swept the top two spots in the 200 free relay.
Pooladi went three for three, winning her lone solo event and propelling her squad to victories in both relay races that she participated in.
“It’s nice to have Liana, my go-to for pretty much guaranteeing a first or second all the time,” Nitros head coach Carol Driffill said. “I was also really happy with Marissa’s swimming, and Nicole’s. I have a very solid girls’ team.”
On the boys’ side, Glendale was the one starting behind and forced to rally. But the inexperienced Nitros boys put up a fight, narrowing Burbank’s lead to as little as 12 at one point. However, the comeback proved too little, too late.
Glendale’s only first-place finish in a boys’ event came when Greg Carrillo won the 500 free. Afterward, Driffill credited Carrillo as well as Paul Aguilan and Arthur Karabyan for keeping the meet close until the end.
“They went and got us really early and then we just had to fight back the whole way and, you know, maybe if we have another half of a meet we would have been able to come back,” Driffill said. “We’ll work out the kinks as the season goes and I’m excited for a full season next year… It was a great way to start off an amazing future for Glendale aquatics.”
Arson Rostomyan and Gavin Jay led the way for Burbank’s boys. The two joined with Edward Mezhlomyan and Avetik Barsegyan to storm out of the gate on their side of the 200 medley relay, taking down three Glendale squads to come in first. The quartet missed the CIF qualifying time by half a second, something which head coach Mike Lucero expects them to improve upon in the weeks ahead.
Jay then went on to win the 200 freestyle and 100 backstroke while Rostomyan won the 200 individual medley and 100 butterfuly.
Rostomyan also swam a CIF-qualifying 100-freestyle time in his portion of the 400 free relay, which the Bulldogs won. The time was not officially counted due to some clock issues, but Lucero is confident that Rostomyan will soon be able to formally qualify in that event as well as multiple others.
“He’s definitely going to be a CIF finalist,” Lucero said.
Jonathan Agazaryan won the 50 freestyle and 100 freestyle, and Mezhlomyan won the 100 breaststroke.
Though Burbank’s girls struggled against a star-powered Nitros squad, Lucero was still impressed by what he saw. Ani Rostomyan won the 100 freestyle, Alina Biryuchkava won the 500 freestyle, and the two of them teamed up with Piper Mills and Julie Kim to win the 400 freestyle relay, ending the meet on a high note.
“Considering that we have a lot of beginner swimmers, things look very promising,” Lucero said.
This marked Burbank’s season opener and Glendale’s second meet of the season. The Nitros’ girls are 2-0 while the boys are 0-2.