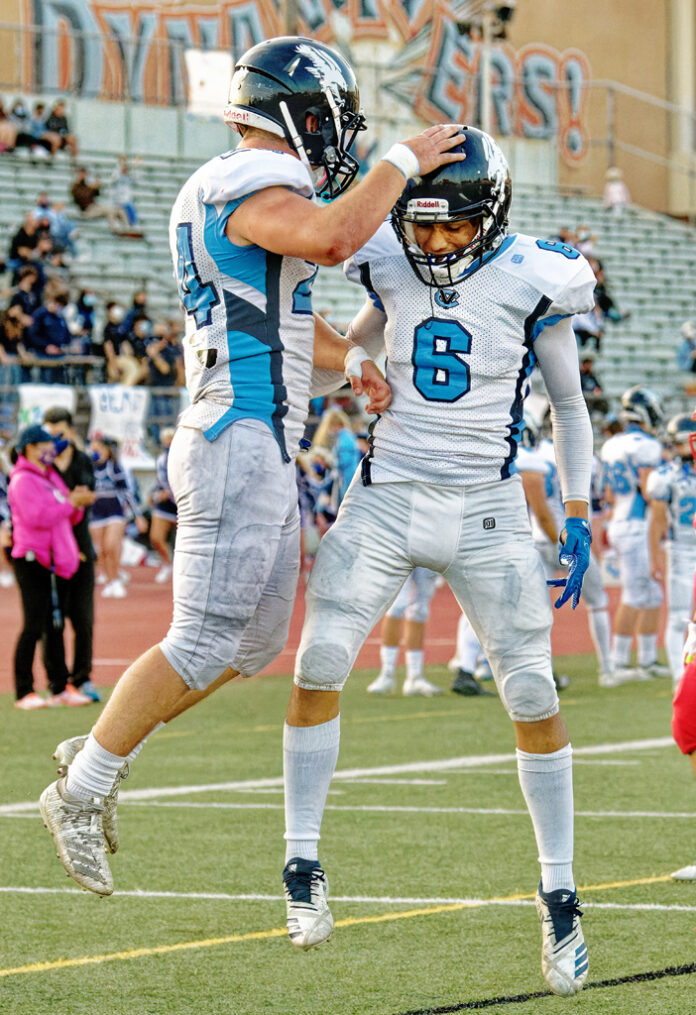 The season didn’t end as the coaches and players wanted it to for the Glendale and Crescenta Valley high school football teams. The Nitros suffered a 49-18 loss at San Marino and the Falcons struggled to find their rhythm offensively in a 27-13 loss at Arcadia.
However, the feeling from coaches wasn’t one of disappointment but rather of appreciation and gratitude.
“Overall, just getting out there for us was enough, especially for those seniors who sacrificed so much,” said CVHS head coach Hudson Gossard. “We’re so happy we could get out and do this for them.”
Crescenta Valley finished the abbreviated season 1-3 with its lone victory against Burbank. All things considered, it’s a campaign Gossard will take.

“When I think back to February or March, there was no thought in my mind that we were going to play. There was no way,” Gossard said. “Then all of a sudden, we’re having a season. It was such a crazy short time of events. It was then, ‘OK, here we go.’ Pass gear out and do this and that. It was crazy.
“But I was just happy. The other good part about it was getting younger classmen to play. We had a lot of sophomores this year playing varsity. That will help us move forward.”
Glendale head coach Jacob Ochoa echoed Gossard in his appreciation for just being able to enjoy another game with his seniors.
“I’m happy for them, but I wish we had more time with them,” Ochoa said. “We did what we could for them, and I think, overall, it was a positive experience. Just getting them on a field was a positive.”
An abbreviated season during a pandemic was not an easy one for the first-year head coach, but certain moments throughout the season gave him hope for a more improved Nitros football program in the fall.
“Nothing went according to plan in my first season, but I was very happy with what I saw,” Ochoa said. “We return nine starters on defense and about seven on offense. The future is bright for us, and we’re headed in the right direction. We’re going to continue to build off this.”