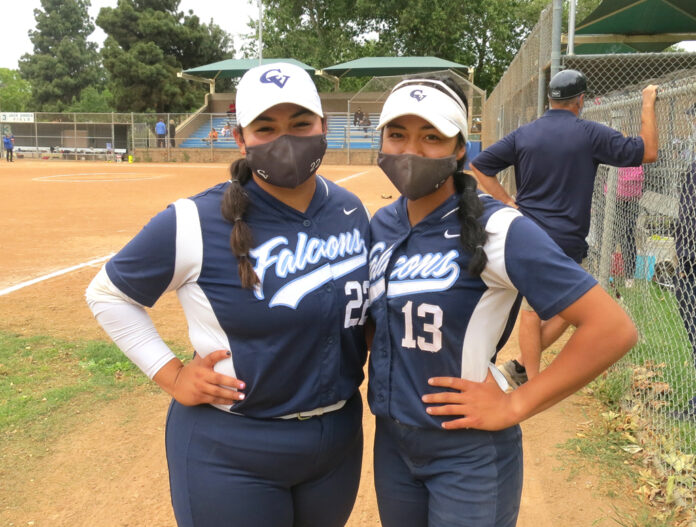 Crescenta Valley High School softball has been the class of the Pacific League in recent years and the trend is continuing this season.
The Falcons started hot and cruised the rest of the way en route to a 7-0 Pacific League victory over host Burroughs Thursday afternoon at Burbank’s Olive Park.
With the shutout victory, Crescenta Valley (4-0 overall, 4-0 in league) has yet to allow a run this season.
“Burroughs is always one of our top competitors, so we came out here fired up, ready to get out there and attack,” Falcon senior Morgan Eng said.
The Falcons put up a five-spot in the top of the first and that proved to be more than enough for superstar Falcon pitcher Dee Dee Hernandez. The senior allowed just three hits while striking out seven, going the distance for the win.

“I felt strong,” said Hernandez, who is committed to pitch at San Diego State next season. “I felt like my catcher [Izzy Jamgotchian] had me all day, every day, like always. I could feel my defense pouring into me and I was just feeling everyone, so I was happy.”
Crescenta Valley led off the contest, hitting three singles off Burroughs starting pitcher Kelsey Acosta. Eng, who is committed to play at UC San Diego next year, got it started with a single down the third base line. Hernandez followed with a single up the middle. Jamgotchian then drove Eng home with a single to plate the first run of the game.
Now with two outs, the Falcons strung together three more consecutive hits. First, Lily Hinkle swatted a double into the left-center field gap to drive in two runs. Lauren Curtis followed with a bloop single that scored Stephanie Wichman. Jayden Sabelis then hit an infield single to score Hinkle and stake Hernandez to the five-run cushion.
The Falcons added insurance runs in the fifth and seventh innings. In the fifth, Hinkle smashed her second double of the day to drive in Wichman, who had reached on a single. In the seventh, the visitors scored their final run on a throwing error by the Bears.
Falcons Sabelis and Devon Medina each singled in the sixth, but Acosta, who had a strong outing pitching all seven innings for the hosts, escaped the frame without yielding a run.
Crescenta Valley has now won 21 straight Pacific League games dating back to 2018.
Burroughs (3-7 overall, 2-2 in league) hit three singles for the game. Rachel Little hit one in the first. Stevie Dabbadie led off the third with one of her own. The final Bears hit of the game was a leadoff single in the bottom of the seventh by Gigi Garcia.
“I’m proud of these girls,” Burroughs coach Doug Nicol said. “They battled against one of the best teams, not just in the area, but in the country. Seriously, [CV] is that good.”
Up next for the Falcons is a nonleague game hosting Westlake High of Westlake Village today. Burroughs plays host to Glendale next Tuesday.
The Falcons and Bears will have a rematch on May 18 at CV.
“I think we are going to keep the same mindset and energy and take it into the next game,” Eng said.