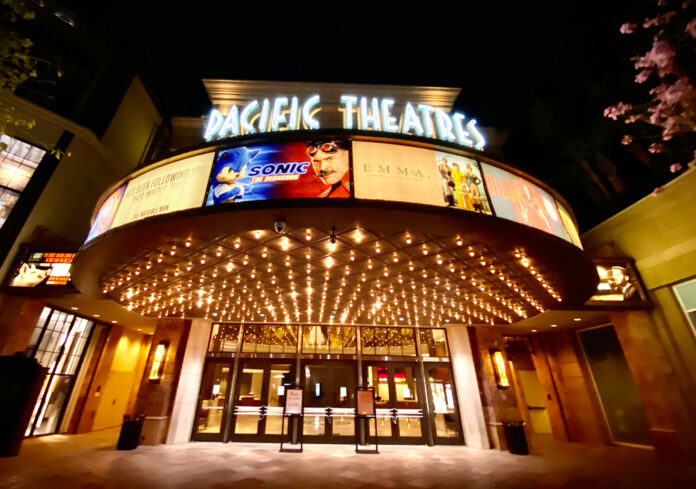 Glendale will be without its two big-name movie theaters as Los Angeles County continues to pull back on its pandemic restrictions, after Pacific Theatres pulled the plug on its namesake brand and its premium ArcLight Cinemas brand this week.
The Los Angeles-based theater chain became the latest economic casualty of the coronavirus pandemic and made real the fears that the movie theater industry would contract as a result of the emergency restrictions. Those restrictions often ceded little, if any, ground to theaters, even while other parts of society slowly reopened.
Studio Movie Grill also filed for bankruptcy protection this year, and although the chain has not yet folded, it did close some of its Southern California locations — including the Glendale location that launched in 2019, months before the pandemic locked its doors. Outside of the Laemmle, which typically presents indie or arthouse films, downtown Glendale will have a void in terms of mainstream anchor movie theaters. (Representatives with Laemmle could not be reached for comment; the chain began gradually reopening its theaters this month.)

“I think that we’re still feeling the impacts of the pandemic” even as the economy opens up, said Philip Lanzafame, Glendale’s community development director. Movie theaters are “just now starting to emerge out of that. I think we’d like to have something there, but it’s just part of the whole recovery process.”
Pacific Theatres has long been a mainstay for downtown Glendale, anchoring the Americana at Brand with an 18-screen theater since 2008, when the Americana was built. Throughout the pandemic, it became an odd sort of attraction as the Americana’s campus remained opened for pedestrians and the marquee retained promotions for films released toward the end of 2019 or early 2020.
The Americana at Brand Memes account on Twitter, which has historically stoked a playful rivalry with the AMC theaters in Burbank, was quick to respond to Monday’s closure announcement — the account kicked off with a popular reaction meme from Adam Sandler’s “Uncut Gems” and followed up with a GIF from the cult horror film “Midsommar” showcasing its sorrow at the news.
Later, the account — @americanamemes — shared an altered image of The Grove, a sister property to the Americana, with a Spirit Halloween store — famous for poaching empty storefronts each October — already moved in at the theater.
English filmmaker Edgar Wright — who helmed “Shaun of the Dead,” “Hot Fuzz” and “Baby Driver” — tweeted on Monday that the news was not just disappointing for fans of the famed Cinerama Dome in Hollywood, but for other theater properties — including the Americana’s.
“I have so many great and proud memories of the Arclight and Pacific Theatres, (the Dome, Arclight Hollywood, The Americana and Grove too),” Wright wrote. “But I don’t want to post my thoughts in the past tense as I don’t want to write an obituary. My first thought was, what can be done to help?”
(True to form, the Americana at Brand Memes account replied with its signature question: “Where do you park when you go to The Americana?”)
Rick Caruso, the namesake owner of the real estate company that owns the Americana and Grove, indicated in a statement this week that movies will continue one way or another at its properties.
“Our properties have always been inspired by the art of filmmaking and the magic of Hollywood — in fact, early in our history we consulted with set designers to help us reimagine a whole new shopping experience,” Caruso said in the Monday statement. “While we are sad to see today’s news, Angelenos and moviegoers across the country can rest assured knowing that there will always be a place on our properties to revel in the shared experience of watching a film together.”
Pacific Theatres actually owns the Americana property. A representative with Caruso did not respond to a question about the nature of the purchase and whether Caruso was considering buying the property to possibly rent out.
Caruso did highlight in his statement that his company actually operated the original theater at The Grove starting in 2002 before eventually selling that property — also to Pacific Theatres.
“Our theaters have consistently performed among the top in the country, so I have no doubt in my mind that this is what our guest is looking for — that this is a part of the very culture that defines who we are as Angelenos,” Caruso added. “We believe in the future of this sector, the future of entertainment, and we will not submit to the pressures of this unrelenting year: we will rise up and reimagine the future of movie-going. We firmly believe in the future of the movie-going experience.”
Outside of AMC’s three theaters in the Burbank Town Center area, Glendale residents’ closest option may be the Regal Cinemas in La Cañada Flintridge — which was likely the destination of choice for movie-goers in Montrose and other North Glendale neighborhoods.
Lanzafame said movie theaters are typically relied upon to attract other business that complement the theater-going experience — dining and boutique retail, chiefly. In recent years, he added, going to the movies has changed from simply buying a ticket, maybe grabbing popcorn and sitting in a stadium seat. Brands like Studio Movie Grill and Alamo Draft House started installing luxury reclining and heated seats and offering dining or bar service. The Studio Movie Grill in Glendale sported a bar in its main lobby, and guests could order dinner and drinks to be delivered to their theater seats upon request.
The pandemic resulted in some industry changes to accommodate the dearth of theatrical releases. Warner Brothers struck a controversial deal with HBO Max to stream its movies at no extra cost after releasing them in the limited theaters available. Other streaming services like Disney+ prompted users to rent its newer releases, such as the live-action remake of “Mulan” last year.
“Certainly the movie experience is evolving,” Lanzafame said. “The streaming services certainly have an influence on that in the future. The pandemic may have hastened that, but I always think that people are going to want to go to the movies. It’s an experience that you can’t get in your home theater and I think that people are always going to want that.
“I really do believe we’ll still see theaters in Glendale and that those two spaces will still be theaters,” he added. “The experience may change, but you’ll still be able to see a movie there.”