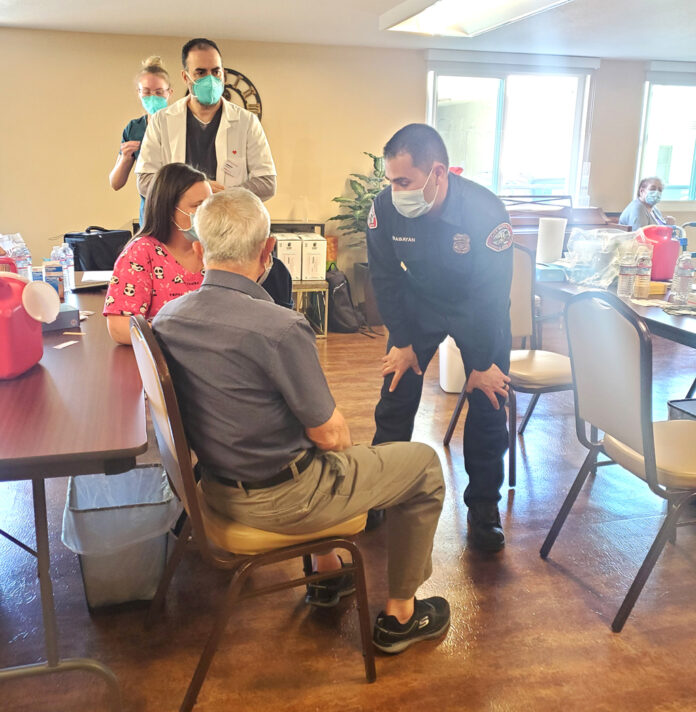 The national pause on using the one-dose Johnson & Johnson vaccine against COVID-19 has brought the city’s home-vaccination program to a halt this week.
Once the Los Angeles County Department of Public Health aligned itself with the Centers for Disease Control and Food and Drug Administration — the two organizations announced this week they are reviewing use of the vaccine after a small number of incidents — that forced the Glendale Fire Department’s hand. Fire Chief Silvio Lanzas said he and their partner, Glendale Memorial Hospital, have to follow the health department’s direction.
“We hope to bring the program back, but we’re just unsure what happens with the Johnson & Johnson vaccines,” he said this week.

The fire department, in conjunction with the hospital, has been vaccinating Glendale residents who live in senior residential facilities and also those who are homebound. Johnson & Johnson’s vaccine was ideal for this sort of operation, because not only is it one dose, but its storage requirements are much lighter than its two-dose companions manufactured by Pfizer and Moderna.
Lanzas said the program had vaccinated around 200 residents already and he’d had another 100 schedule this week and next week. Unfortunately, he added, pivoting to the two-dose variants would be a tall order for the department.
“Logistically, it’s difficult enough to schedule these people for a one-shot vaccine,” he explained. “Having to schedule coming back to their homes 21 or 28 days later is just a nightmare, so we’ve been pretty committed from the beginning to use the Johnson & Johnson vaccines. If we’re unable to get that back up, we may have to end up terminating the at-home program.
“We were building up so much momentum,” Lanzas added, with a disappointed sigh. “We were lucky we were able to get the 200 that we did.”
Lanzas said Glendale Memorial has around 1,400 doses of Johnson & Johnson vaccines on-hand and that the program could resume “immediately” if health authorities give the signal.
The county health department announced Tuesday it was pausing use of the vaccine “out of an abundance of caution” after the CDC and FDA said they were investigating reports that six women between the ages of 18 and 48 developed unusual types of blood clots six to 13 days after receiving the vaccine.
“These reactions are extremely rare, as nearly 7,000,000 people have received the Johnson & Johnson vaccine in the United States to date,” the health department’s statement added. “People who received the vaccine in the last three weeks should look for any symptoms of these unusual clots, including severe headaches, abdominal or leg pain and shortness of breath, and contact their medical provider if symptoms develop.”
Lanzas said his department this week has been following up with program participants to screen for any such side effects. He added that some residents have hesitated to get the Johnson & Johnson shot because, he suspects, they are focusing too much on the shot’s efficacy in outright preventing COVID-19. The key metric, Lanzas and other health officials have emphasized, is how likely a vaccine is to prevent serious complications, hospitalizations or death — which, in Johnson & Johnson’s case, is effectively 100%.
The fire chief said he believed this cautionary pause would only fuel suspicion against what he sees as an effective solution to the pandemic.
“We just feel that this is only going to further perpetuate that,” he said. “We foresee that being a challenge, as well.”
Outside of this home vaccination program, Glendale Memorial has not been using Johnson & Johnson for other such programs, a representative said. The Jewel City Vax Clinic, which launched last weekend at Glendale Community College and is run in part by Adventist Health Glendale, has been using Pfizer and Moderna doses.
USC Verdugo Hills Hospital has previously used Johnson & Johnson for vaccination programs, but has largely utilized Pfizer.
“It’s a much easier vaccine because it is one dose — much easier for college students who are heading back home for the summer, for example — but the majority of our clinics have been with Pfizer and we’re going to stick with Pfizer,” said Kristi Cohen, associate administrator of human resources at USC-VHH.