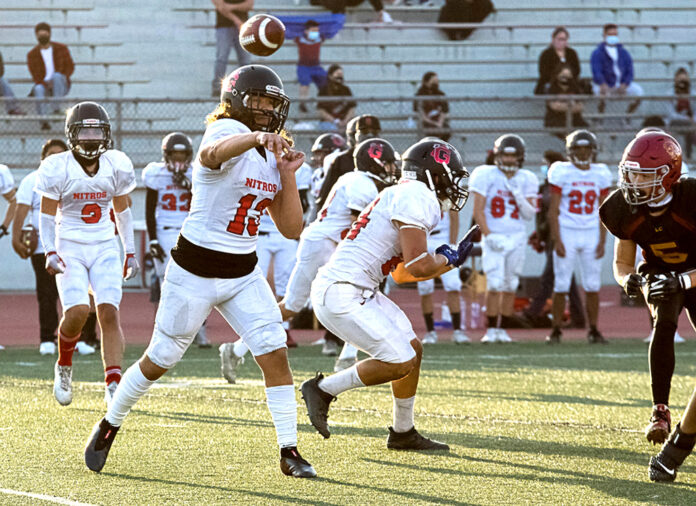 Despite not having won a game in the shortened season, first-year Glendale High School head football coach Jacob Ochoa had his team practice something it had not done all year prior to last Friday’s game with Gabrielino of San Gabriel.
“We actually practiced the victory formation before the game for the first time,” Ochoa said.
It certainly came in handy for the Nitros, who used the formation to run out the clock to and collect a 33-27 victory over the visiting Eagles at Moyse Field.
“It was an exciting game,” Ochoa said. “It took a miracle to beat them. Gabrielino played us tough and we knew they would. I have a lot of respect for our seniors fighting back to the very end.”

Glendale (1-1 overall record) got a big two-point conversion in the fourth quarter to tie the game, 26-26, and Ochoa then called on freshman Sergio Avalos to attempt the onside kick.
“He had kicked three onside kick returns in practice and I took a mental note,” Ochoa said. “If we need to do it, we can turn to him. We needed one then and he didn’t hesitate.”
The Nitros recovered the kick and didn’t waste the golden opportunity. Senior quarterback Juan Estrada capped the drive with a touchdown run and gave his team a 33-27 lead.
Ochoa then called for defender Isaac Leiva and told him, “Go get the quarterback.”
The senior linebacker did just that and forced a fumble that was recovered by teammate Noe Nolasco.
“The seniors really came through,” Ochoa said. “This is a huge win for our seniors and a huge win for our program. Now we’re getting ready for San Marino.”
Junior Keirson Florita also rose to the occasion with two touchdown receptions and an 89-yard kick return for a score.
“He’s an explosive player, and he’s only going to get better,” Ochoa said. “I’m excited for his senior season and to see what he can do.”
Glendale, with its game against San Marino, has an opportunity to pick up two consecutive victories over CIF Southern Section opponents for the first time since 2013.
“That’s the reason I’m here, for these kinds of moments,” Ochoa said. “Wins against Gabrielino and possibly winning another gives us validation for what we’re doing, that we’re doing it the right way and we’re headed in the right direction.”