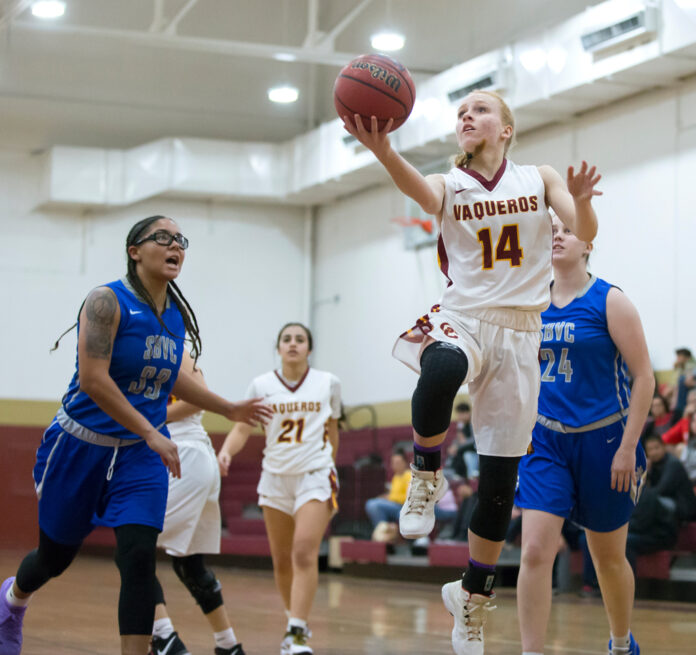 By Alex Leon
Special to the News-Press

Tess Oakley-Stilson remembers the exact day, hour and minute her life changed forever.
It was 11:59 p.m. on May 1, 2018, and she was either going to make the computer keystroke to commit to UC San Diego — or take another path after graduating from La Cañada High School. Her basketball career would be over, months after earning Rio Hondo League MVP honors, if she moved on to San Diego or she could take a gap year to figure out her options.
But Glendale Community College head women’s basketball coach Joel Weiss kept calling with a reminder that playing at the community college level was an option. After visiting the college shortly after, she decided to become a Lady Vaquero and her life would never be the same.

Fast forward ahead almost three years and Oakley-Stilson is happy, self-assured and most of all, grateful — grateful for everything she experienced at GCC, grateful to all of those who helped her grow as a student-athlete and grateful to be ready, willing and able to finally start the next phase of her career in the fall as a student-athlete at UC Santa Cruz.
And, most grateful of all, to be chosen as the 2020 recipient of the California Community College Female Scholar Athlete of the Year award.
“While this award has my name on it, what it really means to me is that Glendale College played such a big role in shaping me during my two years as a student-athlete and that I could not be more appreciative for the experiences I have had on and off the basketball court,” she said in a recent interview. “Coach Weiss and my teammates over the past two years mean everything to me. My teachers challenged and motivated me, especially my English teacher Dr. Groper, and there was always the opportunity to reach out to them for help and support and I will never forget them for that. Lastly, it was my friends and family who helped me stay balanced and on track, especially over the past year.”
Oakley-Stilson shook her head in amazement at the thought of receiving an academic award over hundreds of other qualified nominees who had outstanding academic credentials as well, but her 4.0 GPA in 2019-20 is only part of it. The fact that she did not receive any grade lower than an A in her two years at GCC — despite balancing the demands of being a student-athlete competing at a high level — is a testament to her character and desire to be the best she could be.
But what sets her apart is the passion and drive that motivates her to succeed. That was evidenced in the final game of the 2019-20 women’s basketball season in a Southern California Regional Playoff Finals loss to Palomar College, when she willed herself to play after suffering what was later diagnosed as torn ligaments and a stress fracture to her left foot.
The sight of her dragging herself up and down the court in pain and close to tears is unforgettable, as she would not allow herself to leave the game when her team needed her most.
It would be just the ninth loss against 49 wins for her wearing a Lady Vaqueros uniform in the 2018-19 and 2019-20 seasons, team marks that will be difficult to supplant — along with the school record 27-3 record from last season that produced a second straight Western State Conference title.
“Congratulations Tess on being named the California Community College Female Scholar Athlete of the Year. It is a tremendous honor that you earned with your dedication to academics, character as a teammate, and unrelenting work ethic amongst many other admirable qualities,” Weiss, the head coach, said in a statement. “Our coaching staff is thankful for the opportunity to coach you and appreciates the trust you placed in us when you decided to play at Glendale College two years ago. We are very excited to watch you continue your basketball career at the University of Santa Cruz with Coach Kent and know that you will be terrific on and off the court. Thank you very much No. 14 for an incredible two-year journey and wishing you the best as a Banana Slug.”