Fin Is On the Other Foot for Driffill 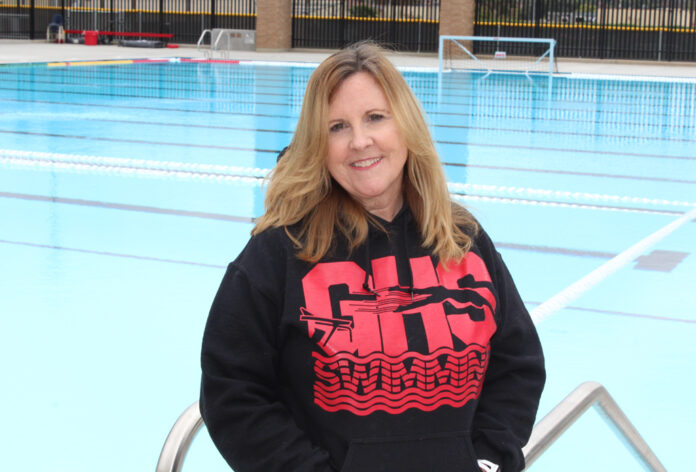 Though she dearly loved the sport of softball, Carol Driffill acknowledges that it wasn’t a sport she excelled at as a youngster.
She has mostly fond memories of growing up in Glendale as Carol Passon, though one brings small pangs of anxiety.
“I loved softball, but I wasn’t very good,” Driffill said with a chuckle. “My coach made me bunt every time I came up to bat. The sign to bunt was he would touch his beard, belt and the bill of his cap. I would think, ‘Here come the three B’s!’”
This revelation was followed by a hearty guffaw.

Driffill attended Glenoaks Elementary School, Wilson Middle School and Glendale High School, where she will soon celebrate her 40th reunion. And while she never played softball for the Nitros, she has made an indelible mark on the school’s swim and water polo programs, which continue to this very day.
“We had a great softball team when I was here,” she said recently, just a few feet from the empty field. “They were all of the all-stars from our little league and I didn’t think I could make it.”
Driffill decided to be a manager for the boys’ water polo team, which brought additional duties with the swim team.
“Coach [Steve] Garberson tried to talk me into swimming, so my junior year I joined the team,” explained Driffill. “I did pretty well and was named most valuable player of the junior varsity team. I liked being the big fish in the little pond, but Garbo said I needed to move to varsity my senior year.”
Though relatively new to the program, Driffill was named team captain as a senior and qualified for CIF in a relay event.
“I was hooked,” Driffill exclaimed, seemingly aware of the fishing pun.
Then it was on to the University of Redlands, where she swam, joined the water polo team and even played two years of softball for the Bulldogs.
Concurrently, Driffill launched her coaching career at Yucaipa High School. She graduated, moved back to Glendale and began coaching “the little kids,” in her words, at the Crescenta Cañada YMCA. She soon began teaching in the Glendale Unified School District, first at Roosevelt Middle School before moving to her high school alma mater in 1990.
She went back home in another way — when she was asked to become the junior varsity swim coach for Garbison.
“He taught me a lot and when he retired I took over as varsity coach.” Driffill said. “Since I had played water polo in college, I also started coaching the junior varsity boys’ water polo team and then also worked with the varsity for a few years. I loved water polo but there was no girls’ team. So I started one in 1994.”
That final point was said matter-of-factly, belying its trailblazing impact.
Aside from a stint as the school’s athletic director, things, thankfully, haven’t changed much for Driffill. While she enjoyed the A.D. gig, Driffill missed coaching — so she returned.
“Swim needed a cheerleader,” she humbly explained.
The Nitros have won several league swim championships and, in 2013, captured a CIF Division 5 water polo title. Scores of athletes have advanced to compete at the collegiate level, the most recent being Trenton Julian, a senior at the University of California, Berkeley, who is “doing amazing,” according to Driffill.
Her passion extends to the YMCA of Glendale, where she has volunteered for the better part of four decades and met her late husband, Bob Driffill, the organization’s former CEO and father of her four children. She continues to serve as a summer camp leader at Camp Fox on Catalina Island, and became excited when explaining how it will possibly be open this summer, though at reduced capacity due to the pandemic.
Her enthusiasm for swim remains at full capacity, a sentiment that has been bolstered by the impending opening of the new state-of-the-art swimming facility at GHS, which will be the envy of virtually all other schools.
“I first jumped in the Glendale High School swimming pool in 1979,” she exclaimed. “I love GHS and I love being part of her history. I was in high school when the scoreboard was donated to the pool and that was the last upgrade until this new pool. We had a ‘say goodbye to the old pool’ party and I can’t wait to be able to have a ‘say hello to the new pool’ party. My alumni friends are jealous, so I can’t wait to invite them back. Hey, maybe they could donate to the aquatic program. We are going to need lots of new athletic supplies.”