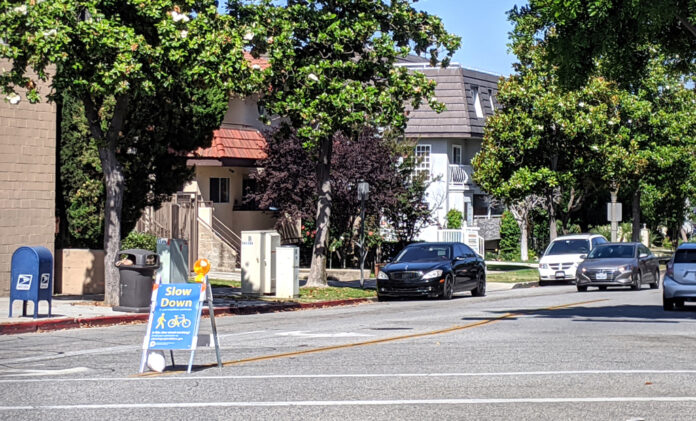 The City Council plans to continue looking at options to potentially make permanent the Slow Streets program that it piloted last year at the start of the coronavirus pandemic.
The council had considered a number of options at its meeting Tuesday and ultimately sought more research on an additional batch of options that were brainstormed at the meeting. There was not a vote on Tuesday, but there likely will be eventually.
“People are, at this point, vested in the program,” Councilwoman Paula Devine said. “I’m for creating a permanent program.”

The Slow Streets program uses signage in certain residential streets to remind motorists to slow down and drive with care to account for pedestrians and bicyclists — children especially — who may also be using the roadways in their neighborhoods. Given the necessity for people to spread out during the pandemic, the council agreed to pilot this program last year, using A-frame signs along streets whose residents had asked for them.
“I’ve heard a couple complaints but mostly I’ve heard people say they enjoy it,” said Councilman Dan Brotman, who first recommended the program. “Its effectiveness is more psychological than actual. It’s like a placebo. It works because people think it’s going to work. I think what it did was it made people feel safer coming out and walking in the street and I’ve seen in lots of locations more people with babies, bikes and families walking. I think as people are walking in the streets, that in and of itself makes cars a little more cautious.”
The pilot cost the city $30,000 and used 204 labor hours, according to Assistant Director of Community Development Bradley Calvert. The city proceeded with 85 of the 96 applications and used 300 total signs, accounting for streets that spanned multiple blocks. Of those, 86 signs — 29% of them — have been stolen or damaged beyond repair, Calvert noted.
“While the program was very well received by the residents of Glendale, we did run into issues in terms of signs being demolished, vandalized or damaged in some way,” he said.
Edward Hitti, the assistant director of public works, added that “sometimes people like [the signs] and move them to others streets.”
Potential alternatives for a permanent program include signs mounted onto already existing poles, which are cost-effective but less visible; signs mounted in the pavement at intersections, which remain visible but are costlier and could damage the roadway if hit; and using large planters to hold signs, which are highly visible and not attached to the roadway, but are prohibitively expensive and require maintenance.
“Here in Glendale, that thing’s going to get hit,” Brotman said, almost with a laugh. “It seems like it’s trouble.”
Councilman Ara Najarian wondered whether larger plastic barriers would provide ample visibility while not damaging the roadway or vehicles when they’re hit. Meanwhile, Councilman Ardy Kassakhian said whatever is chosen should be reflective at night, especially on streets without lights.
It was certainly clear that the A-frames and their sandbag weights could not stay, however, with Brotman noting they were looking a little worse for wear at this point.
“I wouldn’t want to see it go away, but I wouldn’t want to keep what we have in place,” he said.
Najarian cast suspicion that the damage to existing signs was accidental, as if a motorist accidentally bumped and spun the signs.
“These things are completely run over,” he said, “perhaps in a moment of road rage or rebellion against the city.”
The council largely agreed with Calvert that, in the interest of equity, there not be any petitioning requirements for sign placement. To this point, 250 signs have been placed in North Glendale neighborhoods, with the remaining 50 going to South Glendale.
“It’s much easier if you live on a single family street and you only have 10 neighbors that you need to get feedback from, versus a multifamily street where maybe there’s several hundred units and getting a certain number of petitions is going to be much more challenging,” Calvert said. “We do believe if we’re going to move this forward that we need to make sure it is equitable from a geographic presentation.”
In an earlier presentation, Calvert noted that the earliest applications for the program mostly came from South Glendale.
The council also agreed that priority sign placements should go to blocks where there are no sidewalks, thus forcing pedestrians to use the street. The council also will have to lock down a consistent funding source.

Jambalaya and Hoops Spice Up a Chilly Night