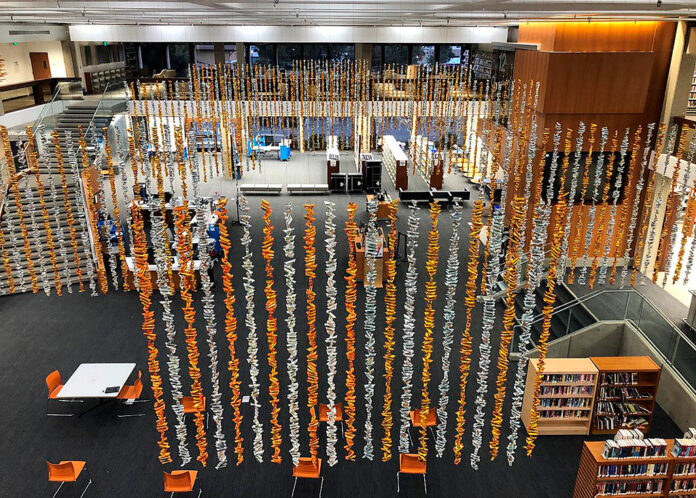 The glinting reflection of thousands upon thousands of paper ingots will shine through the windows of Glendale’s Central Library for the next several months, each in memoriam of a Los Angeles County resident who succumbed to the coronavirus this past year.
The gold and silver decorations — each hand-folded into almost a tube shape from square pieces of joss paper — are ordered on long cuts of rope, each of which are now festooned from the ceiling in the library. The dreamy sight will remain through at least June, and whether doors open at the library in the meantime, they are quite viewable from outside. (In fact, officials suggest a night viewing might be ideal.)

“We are particularly impressed by Connie’s installation,” said Caroline Tufenkian, chair of the city’s Arts and Culture Commission, at the exhibit’s unveiling last week. “It is timely, it is relevant and it is a tribute to all the live that have been lost to COVID-19 in Los Angeles. She has managed to make something beautiful out of such a tragic, tragic time and event.”
The installation’s artist, Connie D.K. Lane of Seal Beach, said she informally began folding the ingots in April last year, almost as an afterthought. She traced the inspiration to her Hong Kong heritage, where the Chinese tradition of using joss paper crafts to burn as offerings to the afterlife endures.
“I’m not going to make fire,” she quipped at the press conference last Friday. “The purpose is to create an immersive installation with the audience entering the library as though they are in a temple or a shine of worship, to create a place to remember those departed.
“I think it will be a really good moment to pause and look up,” Lane added.
The Glendale Library, Arts and Culture Department resuscitated its Art Happens Anywhere — coined phonetically AHA — Program as the pandemic set in, using funds from the city to curate art and support creators during the economic upheaval. Lane applied for a grant to have her exhibit here, and ramped up ingot production in October once she was approved.
Grimly, however, she ultimately needed help. The death toll had mounted by then, and would only get worse as the winter holiday coronavirus surge overtook the county. Lane, with help from the library, arts and culture department, fashioned kits with 20 sheets of joss paper and folding instructions — she even recorded a folding video for the website — for volunteers to retrieve and ultimately contribute to the exhibition.
“Though this past year has forced us to be distanced, our community is connected and committed and today, you are seeing the fruits of that labor,” Kathryn Barger, the county supervisor for the 5th supervisorial district, said at the unveiling.
Though the exhibit is titled “15,000 & More: A Plethora of Light & Darkness,” the number has sadly grown. Gary Shaffer, director of the library, arts and culture department, noted that Lane had come in last minute before the unveiling to install another panel of suspended ingots.
“It’s both a beautiful and poignant reminder of the loss we’ve experienced as a community and as individuals,” Shaffer said.
Barger, who chaired the board of supervisors at the onset of the pandemic and throughout most of its duration, said hope is nigh last week, which happened to mark the 13th month since L.A. County had its first COVID-19 diagnosis. Vaccination efforts are ramping up, and hours after the unveiling, federal officials signaled emergency approval of a third vaccine for use here.
“It’s my hope that as we get this vaccine out into the community, you will no longer have to come and put more up,” Barger told Lane, “but we will recognize those lost and celebrate the lives we have saved.”
Mayor Vrej Agajanian thanked Lane for adding vibrancy to the art scene in Glendale and for producing such a thoughtful installation for the downtown landmark.
“This heartfelt memorial is a glimmer of hope in a time of darkness over the past year,” he said.