HomeCity NewsYour Best Wishes for Future? Share Them at the Alex
City NewsFeaturedPublicationGlendale

Your Best Wishes for Future? Share Them at the Alex

In need of a small outlet to unload your hope on the world as a largely interminable 2020 hurtles to an end?
The Alex Theatre has you covered. Or rather, it is inviting people to cover its front gate with their hopes, dreams and well wishes for 2021 — the start of which, many believe, signals the beginning of the end for the coronavirus pandemic that upended virtually all plans for this year. Passersby can take a paper tag from the bunch in front of the theater, scribble out their message and tie it alongside others on the metal gate — the Wishing Wall. People also may submit messages so that Glendale Arts staffers can post them on their behalf. 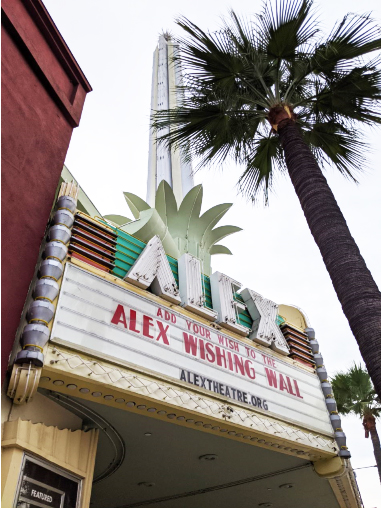 “The Alex has symbolized so many positive things for the community, and it’s done so for 95 years,” said Maria Sakahian, a managing director of Glendale Arts, which operates the theater. “Since we’re not able to open those gates and invite the public inside, we thought, ‘Why don’t we find a way for the physical structure to have that effect and nurture that feeling for the community, when people need it more than ever?’”

Throughout the months of the pandemic, the theater’s iconic marquee has been a regular message of hope and encouragement for the city, on behalf of Glendale Arts. A wishing wall, Sahakian said, turned the tables a bit.
“There’s all this space on the gates,” she concluded, “so we wanted to invite everyone to share their thoughts.”
Those thoughts have been accumulating since mid-December and will continue to do so through Jan. 8. Many wishes are predictable — hopes for the return to school, for COVID-19 patients to pull through, for the restoration of financial stability to our lives — but it doesn’t diminish their value.
“It’s very simple and it’s very elegant,” said Elissa Glickman, director of Glendale Arts. “It’s another way we see arts and culture and inspiration intersecting.”
Some wished to be able to return to Glendale for the holidays. One person hoped for the protection of Armenian families displaced by the resurgent war with Azerbaijan this year. Two tags separately cited the longing that Belarus’ citizens would find freedom after decades of authoritarian rule.
A pair of tags tied together appear to have been penned by a couple — “I wish for my wife to become a mother and for me to become a father,” one read, joined by another similar yearning: “This year I wish for parenthood. May this be the year we welcome our rainbow baby. A healthy pregnancy and a healthy baby.”
“There are a lot of beautiful things that come out of people’s minds when they pass by it,” Glickman added. “It’s been a really great campaign and it’s been really fun for the staff. I think the arts curators here needed that bit of inspiration. It’s been good for us.”
Sahakian agreed that the anonymity of the exercise allows people to cast their wishes without the inhibition or emotional vulnerability that come with addressing a crowd. 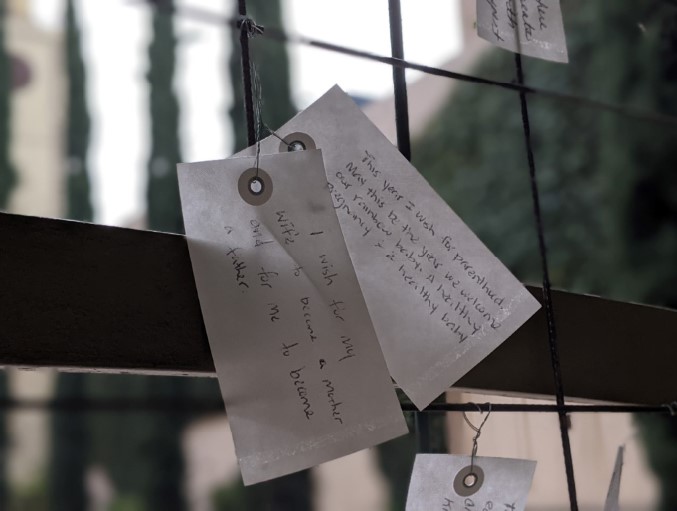 “There’s no pressure to attach your name to it,” she said, “so as we expected, people are very openly and freely expressing what their hopes and dreams are, whether they’re connected to this year or unrelated. It offers catharsis, really, to be able to do so, so we’re happy to be able to offer a place that can bring that.”
Those who wish to have Glendale Arts prepare their tag can submit their message at alextheatre.org. An email will be sent with a photo of the tag after it’s done. If they share their message on Instagram, Facebook or Twitter, people are encouraged to tag the theater — @AlexTheatre — and use the hashtag #TagAWish.
The Wishing Wall project — which is inspired by Yoko Ono’s Wish Tree project — is expected to begin a yearlong exhibit throughout the city. After departing the Alex Theatre, it will likely rotate to other landmarks throughout town — that part’s still being planned.
“We don’t know if it’s something we’re going to invite people to add to at that point,” Glickman explained. “We don’t know what it is. We don’t know what that final piece is going to look like, but we do know we want it to find a home in various spots throughout the community.”