Hip-Hop Contest Brings Together Many Colors of Dance 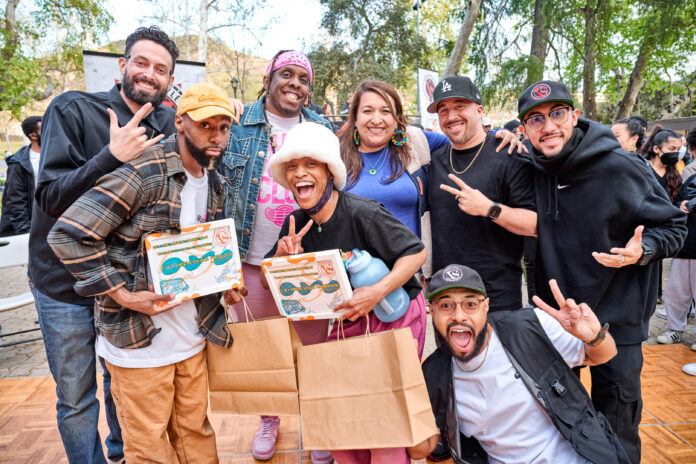 By Jonathan Williams. First published in the March 5th, 2022, print issue of the Glendale News-Press.

What else might attract a few hundred people to Verdugo Skate Park on a picturesque Saturday in February, but a brown hardwood floor, a DJ and two loudspeakers?

Rhythmic gyrations, thunderous stomps and expressive chants reverberated from Stengel Field all the way to the parking lot that afternoon as competitors battled one another for hip-hop glory at the Color in Dance hip-hop dance festival. The spirited event brought Black, Latino, Japanese and dozens of other competitors from different ethnic backgrounds to express themselves in the language of dance as the sounds of hip-hop echoed throughout the park.

The festival — formally billed as “Let the Music Move You, Vol. 12” held last weekend — was illustrated with many colors, built on a foundation of Black history. There were no politics nor police officers, but only free expression, represented by music and dance.

“Hip-hop has the power to bring people together,” said Jackie “Miss Funk” Lopez, co-founder of Versa-Style Dance Company. “Though it was created by the Black community, it’s the only time when the music plays everyone starts to bob their head no matter what they listen to — hip-hop has that power.”

More than 70 competitors brought their best moves to the park on Saturday from all over. The event was an “open style battle” where dancers showcased their talents, without limitations on dance style, putting krumping, popping and breaking on full display.

The crowd swelled to nearly 300 as the day went on, producing enthusiastic chants of “aye!” or “let’s go!” to fuel the dancers’ movements. Indeed, the crowd became part of the routine, with dancers siphoning energy from the crowd to use during the beat drops courtesy of DJ Roxswift.

They gathered on the floor to “cypher,” where an open circle is created and people take turns dancing in the center. The format of the competition included preliminary rounds, a top 16, top eight, semifinals and a deciding final battle.

During the top eight, each dancer was able to choose which “battle guest” they could face in the final rounds. These guests included prominent figures in the hip-hop dance community such as Rascal Randi, Robozilla and Beast, along with several others. The battle showcased all different racial backgrounds and genders.

One of the semifinals pitted Rebekah “Beks” Denegal against Toyin Sogunro, an urban dance educator, choreographer and ambassador from Washington, D.C. After an intense round, Denegal moved on and faced Kaenen “Kniin” Williams in the finals.

“It means so much to me,” Sogunro said. “We were so isolated in our own spaces dealing with what it felt like individually. To be able to come back into spaces like this where we can all be together, it shows what it means for us and how you choose how you want to walk in life. To be able to dance with other people again, it feels so good. I live for this.”

The final battle showcased a passionate, tense display of contortion, ferocity and explosiveness all while keeping an elegant precision to their routines. In the end, Denegal was the one left standing and took home the $500 prize.

“I’ve struggled in the past with freestyle,” Denegal admitted. “I’ve been dancing for over 10 years and battles were always hard for me. This battle, I was able to be honest with myself.”

Denegal, who grew up in L.A., emphasized how meaningful the event was, not just for Black culture but for so many others represented in the battles.

“It means freedom and identity,” she added. “Tapping in and feeling confident, I was able to gain my self-esteem today. Black Lives Matter. Smile and be happy and that’s important to show everyone.”

Hector “Intricate” Ascencio, a Latino competitor from Heyward, made the trek to compete in this event and has been dancing for the last 15 years. His style of dance is called “turf” dancing and is popular among Bay Area performers, primarily in Oakland. The two-time World of Dance champion said Saturday would bring tough competition to the floor.

“It’s just an honor,” he said. “We’re very isolated up there. There’s a lot of raw battle energy out here and it brings out the competitiveness.”

Ascencio noted how important it is for people of color to have a space to express themselves through dance.

“We deserve safe spaces like this as African Americans, Latino Americans, Asian Americans, all of us,” he said. “We need this. It builds the community and a safer space for the youth. It fights the violence. If you have beef with somebody, you can handle it through dance.”

D’Angelo “Prince Daboo” Boothe was born in the United Kingdom but lives in Los Angeles. He’s been dancing professionally for almost 20 years and, like Ascencio, shared what hip-hop dance means not only to Black culture but what it means to be human.

“This is unity,” he said. “This is bringing everyone together. If we can all come together, it doesn’t matter what race it is. I don’t see race. I don’t see a gender. I see humans and its good all types of cultures can come together to showcase what we do. It’s nothing but love.”

Lopez founded Versa-Style Dance Company — a nonprofit organization that seeks to help marginalized groups worldwide through hip-hop dance by creating content on stage in underserved communities in cities like New York and Los Angeles — in 2005 with collaborator and eventual husband Leigh “Breeze-lee” Foaad. She said she was thrilled with the massive turnout last week and stressed the importance of the work she did with the Glendale Arts and Culture Commission to secure the grant with the location.

The organization’s last event was in 2019, before the COVID-19 pandemic put a halt on their event operations. Lopez added they planned their massive 15th anniversary in 2020, only to have it canceled due to the shutdown.

“It’s so amazing and gratifying,” she said. “We were going to do our big 2020 event. I always like to call it our quinceañera.”

In May, they will be throwing their largest festival ever in partnership with the Torres East L.A. Performing Arts Magnet. The school is very personal to Lopez — her former theater teacher, Carolyn McKnight, is now the principal at Esteban E. Torres High School.

“She changed my life,” Lopez said. “I was an innocent kid and a first-generation Latina. All I knew was work, so to not just have her change my life but then fast forward two generations later and work with her is amazing.”

Raised in Echo Park, money was tight and at 16, she started working full time to help pay the bills. Her mother was eight months pregnant when they immigrated to Los Angeles from El Salvador. Eventually, she landed at UCLA where she earned a bachelor’s degree in world arts and cultures — with an emphasis in dance.

Lopez added she is excited for the community to see what Versa-Style Dance Company has to offer the city she cares so much about.

“I’m eager to share this story,” she said. “Seventeen years of hard work and labor. It’s time and I want the world to know because we can’t do it alone. It’s so much bigger than us.”

Judging the competition was Emilio “BuddahStretch” Austin Jr., considered to be one the world’s first professional hip-hop dancers. Austin, who has worked with the likes of Michael Jackson, Will Smith and Rakim, paid out of his own pocket to be a part of the experience.

“This is about the culture which is opposite of politics,” he said. “It doesn’t separate people; it brings people together. That’s what I’m all about. Just seeing the dancers express themselves makes me feel better about myself and gives me inspiration. It’s about self-expression and expression as a whole.”

Austin added how hip-hop has bridged the gap between so many different cultures — a fact on full display during the battles on Saturday.

“We’re indoctrinated that all of our cultures are separated when they’re actually interactive,” he said. “It’s the interconnectivity that makes us interesting, not our separation. That’s what we need to break. That indoctrination of difference. There’s very little difference between us. Colors don’t actually exist, it’s just wavelengths of the same thing. When we’re together there’s strength, unity and love.”