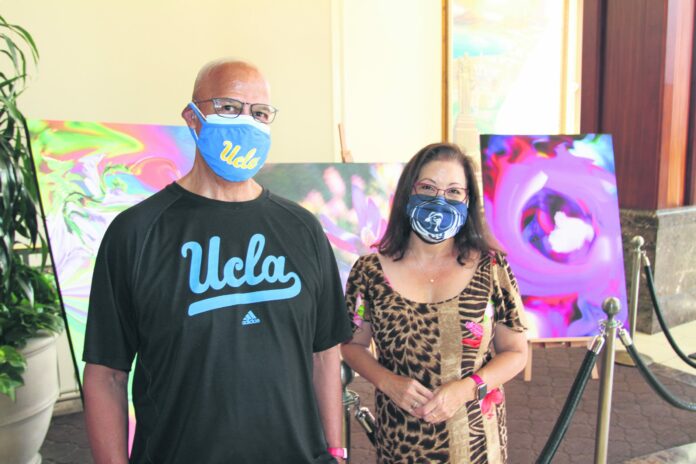 Photographer Michael Warren scoffs at the idea that he is a Renaissance man.

He said recently that his gifts came to him at odd times in his life, but the truth is that Warren has had an interesting, varied life befitting the Renaissance man title.

Before becoming an artist pursuing what he said is a newfound love, Warren was a basketball standout on UCLA national championship teams and an Emmy nominee as an actor in the classic police procedural “Hill Street Blues.” The inspiration for his photography, he said, comes from his faith.

“Between three and five years ago,” Warren explained, “I was coming out of the gym and the Lord literally spoke to me, saying, ‘Look up.’ And when I did, I noticed these clouds — clouds that I had taken for granted my entire life — and I really started paying attention to them. I went all over the city, trying to get to the right vantage point to take pictures of clouds.”

Warren used his tablet to put his own impressions on the photographs and has since cultivated a surreal photography style. Now, as a result of local activism and advocacy, his work can be viewed in Glendale as part of the inaugural exhibition “Guided by Good, Led by Love” at the Americana at Brand’s new Diverse Galleries.

“Sunsets, landscapes, flowers and foggy days at the beach became amazing opportunities for me to photograph,” Warren said. “My objective is taking a picture from the mundane, then giving it power by manipulating the colors and the landscape around it. I love bold, bright, aggressive colors and many of my photographs depict this fascination.”

According to curator and Glendale resident Ren Hanami, Diverse Galleries’ goal is to “illuminate works by art photographers of color.” Hanami, a Japanese American actress who has lived at the Americana since 2013, said she is proud to discuss her family genealogy, which is partly Scottish — her clan has a castle in the Highlands.

“We were the only family [in Huntington Beach] that had parents of two different races at that time,” she said.

Before the current exhibition spearheaded by Hanami, the Americana apartment lobbies featured generic 1960s stock photos, one of which depicted a white couple being served by a Black man — the only non-white person among the dozens of photos adorning the lobbies.

The photograph did not go unnoticed by Hanami, who contacted the Caruso property company, owner of the Americana, about taking it down.  There was no immediate reply.

That changed after the May 2020 murder of George Floyd, which triggered a cascade of Black Lives Matter protests throughout the nation — including a march through downtown Glendale — and around the world.

“I had been working on a proposal, a PDF with ideas of how we could make [the lobbies] more diverse,” Hanami explained, “and that night, ironically, as I was composing my email, I turned on the news and it was the day [Floyd was killed]. … They kept showing the nine minutes [that a Minneapolis police officer knelt on Floyd’s neck], and you’re just devastated. I was crying and thinking: The only person of color on that wall in our Lido Lobby is a Black man in a subservient position, and so I wrote the email that night, saying, ‘This has to come down!’”

A few days later the picture was taken down and property firm founder Rick Caruso took out a full-page ad in the Los Angeles Times addressing racial injustice and promising to do better to help remedy it.

Part of that promise, evidently, was to listen to Hanami’s comments about racial insensitivity and revamp the Americana at Brand lobbies to showcase that commitment.

Hanami, who at first just suggested the offensive photo be replaced by something else, was soon assigned to be the curator of the newly minted Diverse Galleries at the Americana. She credits Philipp Posch, then the recently-hired vice president of hospitality for Caruso, as the person who made the project happen within the real-estate giant.

The galleries opened in October but, because of COVID-19 -related restrictions, only guided tours have been available throughout the pandemic. The policy is still in place for the time being, despite Los Angeles County’s loosening of restrictions on June 15.

Warren has found that showing his work at the Americana increased his profile as an artist.

“The fact that there are so many people of color who don’t get the opportunity to showcase their work because there are just no places to exhibit it,” he said, “and to have the Caruso properties be amenable to something like this, I think it says a lot about them and it gives us that opportunity to present our work to an audience that we may not have been able to reach.”

Indeed, since he started displaying his art at the Americana, Warren has sold a couple of pieces. For now, he has four permanent pieces on display at the location.

“A lot of people have sent Michael messages on Instagram saying, ‘This is so wonderful. It just makes this [place] more special, this space before just didn’t have any meaning,’” Hanami said.

For the next diverse artist, Hanami chose to highlight Asian American and Pacific Islander heritage through the work of Japanese American photographer Izumi Tanaka. Her exhibit “Refuge in the Natural World” is currently on display.

“As a first-generation immigrant, I am profoundly grateful for the opportunities this country had provided me over the last four decades to pursue many of my dreams.” Tanaka said.

Born in Yokohama, Japan, Tanaka was influenced from an early age by both her father’s and grandfather’s love of photography. Her work is deeply influenced by the sea and the forest, which are her refuge.

“In the recent social climate, in which violence and injustice against Asian Americans have been drawing attention, I am honored to be a part of this exhibit by the Americana, [which] provided a place to express my voice via my photography,” Tanaka said.

A portion of the proceeds from sales of Tanaka’s work will be donated to East West Players, the nation’s first professional Asian American theater organization. It was created to provide a venue for Asian American actors to gain visibility and play roles beyond stereotypes.

Native American artist Robert Mesa is the next photographer to be featured at the Diverse Galleries.

Exhibits are located in the Grand Lobby, the Lido Lobby, the Raleigh Lobby, the Continental Lobby and the Marc Pool Lobby. Tours may be booked in advance through the Caruso Concierge at the Americana or at (818) 637-8982.