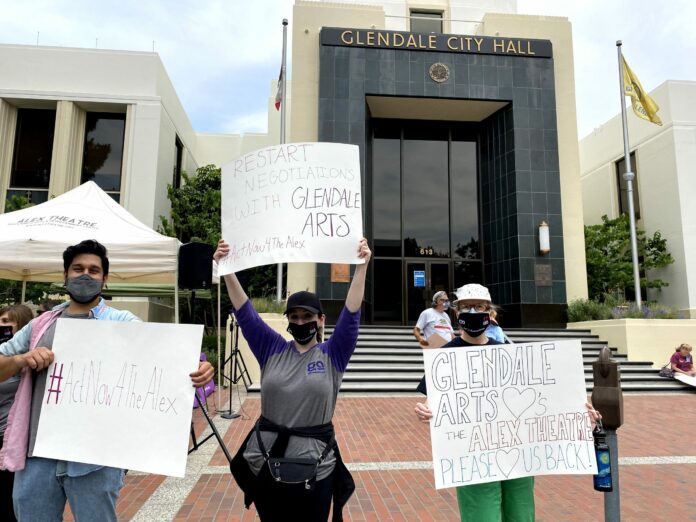 In a split vote on Tuesday, the Glendale City Council opted to invite three candidates seeking to manage the Alex Theatre to negotiate, after entering the meeting aiming to meet with just two.

The council expects to meet in closed session soon to determine the parameters of the negotiations and potentially identify a council member who will attend and observe bargaining sessions but not actively participate. In the meantime, the city will continue to enact periodic extensions with Glendale Arts, which has managed the theater since 2008, to ensure there is no interruption in management as the landmark emerges from the restrictions of the coronavirus.

Mayor Paula Devine and Councilmen Vrej Agajanian and Ara Najarian approved that course of action at a special meeting, while Councilmen Dan Brotman and Ardy Kassakhian dissented for differing reasons. The decision came after 33 people called in to offer comment, seemingly echoing what many more had emailed to council members prior to the meeting.

“I want to assure everybody that it is of the utmost concern of this council that the Alex Theatre continue to thrive in our city,” Devine said, in an attempt to pre-emptively assuage the anxieties of many callers. “We have no intention of harming it or disbanding it or shutting its doors. We want it to be successful and we want it to be a truly community theater as we’ve had in the past and for the enjoyment of all of our residents.”

Nearly all callers voiced support for Glendale Arts, the nonprofit organization founded to manage the city-owned Alex under a contract. Although the organization emerged triumphant from a bidding process in April, the council chose in its prior closed session to end exclusive negotiations with the group and add the second-place bidder to the table.

“During this negotiation period, staff has felt that we might have reached an impasse trying to negotiate to a fee level that we felt would be appropriate to bring forward to council,” Bradley Calvert, assistant director of community development, said Tuesday. “Especially during this latest proposal, we felt that that didn’t quite meet those goals we were trying to achieve.”

Calvert said Glendale Arts had advanced three 10-year proposals leading to this point — first for $500,000 a year in management fees, for a total of $5 million; the second for $385,000 a year, for a $3.85 million total; and the third for $400,000 each of the first two years and then $250,000 annually for the remaining eight (totaling $2.8 million). The city had rejected those offers, but did not return with a counterproposal. Devine admitted that, broadly, the council was eyeing a contract of no more than $250,000 a year, but Najarian added that he, at least, felt that number to be high.

Devine added that she was “a bit taken aback” by Glendale Arts’ offers, especially after the organization needed just a $150,000 subsidy at the end of the 2018-19 fiscal year. Nina Crowe, the incoming CEO of Glendale Arts, said in her phoned-in remarks to the council that a $250,000 cap was news to her.

“We were very gratified to have won your confidence, and we were looking forward to negotiating the details, and things suddenly reversed, and we don’t know why, honestly,” she said. “If this was a stated threshold that you gave to the city staff to report back to us, it was never communicated to us.”

Calvert and other council members also indicated that the leadership change — Glendale Arts announced earlier in June that longtime CEO Elissa Glickman was stepping aside and managing directors Crowe and Maria Sahakian were promoted to CEO and chief operating officer, respectively — posed a concern for the city.

The chief executive of the second organization, General Admission Venue and Production Management, asserted on Tuesday that his bid fell within the parameters and addressed some public concerns about the idea of a private company coming from outside to replace a local nonprofit.

“We have a great respect for the Glendale community and really believe in the community and programming that’s there already,” said Gilles Chiasson, the CEO. “Our proposal was all based around taking the programming that existed at the time and then trying to add to it and build upon it — not to replace it.”

In addition to General Admission, the city will also now engage SAS Entertainments as a possible contractor as a result of the council’s decision. City Manager Roubik Golanian said it was initially not recommended on Tuesday because it had scored “significantly lower” in the city’s evaluation of the bids.

Glickman defended the leadership transition as her effort to identify natural successors and groom them for the jobs, not a case of her jumping ship suddenly. She also questioned the wisdom of considering a whole new leadership group if the promotion of veteran Glendale Arts administrators made the council nervous.

“This is not a hoodwink. This is not a bait-and-switch. This was a passing of the torch of people who are capable to lead,” Glickman said, “and if the argument here today is transition, then coming in with an unknown, an unproven entity, has to be unacceptable, and we know it’s unacceptable because the community has come out in support of what we offer and what we bring to the table. Give us a benchmark and we will hit it.”

Agajanian defended the city’s approach as ensuring that taxpayer dollars were being spent more effectively, and highlighted that the management fee isn’t the only municipal money that goes toward the Alex.

“One thing we have to be clear about is that what we’re trying to do is see what’s best for the city,” he said. “This is what I’ve been elected for.”

Brotman replied that to get to this point, the city had conducted an audit of Glendale Arts, spent $30,000 on a consultant on how to approach the theater’s management and spent the money on a bidding process.

“I don’t understand the point that we need to ‘look at what’s best for the city.’ That’s what we just did,” he said.

“We only gave them vague references to what’s in the council members’ head but we did not counteroffer, and I just think that that’s ridiculous. We say we ‘reached an impasse’? What kind of impasse? They’re offering $2.8 million. … We’re $300,000 off, in that sense,” Brotman added. “’Not quite meeting the goals’ is very different than ‘impasse,’ so I would very much like to see us go back and seriously negotiate, put an offer on the table and get this thing done.”

Najarian said he was unhappy with the fact that Glendale Arts’ opening offer was more than triple its pre-pandemic subsidy was, especially after it had spent each prior year improving its income and spending efficiency. Devine noted that, in its request for proposals, the city’s top priority was for an organization to “establish consistent financial stability and sustainability for the Alex Theatre operations while minimizing the level of annual management fee provided by the city.” She also suggested that a competitor coming in and doing the actual homework to formulate a full proposal could be to Glendale Arts’ benefit — it’s certainly possible that another firm would conclude a similar amount is needed to manage the theater.

Kassakhian admitted that he, personally, was not always satisfied with the outcome of an Alex Theatre event, on one hand. (His “no” vote was because the original motion did not include a measure adding one council member to the room during negotiations.)

“But I do know that the people who are involved in the operations of the Alex Theatre are people from our community who understand our community, and we often talk about the uniqueness of the community,” he said. “We bring in someone from the outside, there is going to be a tremendous learning curve. My concern is that we turn around and 12 years from now, this new entity is exactly where Glendale Arts is today.”