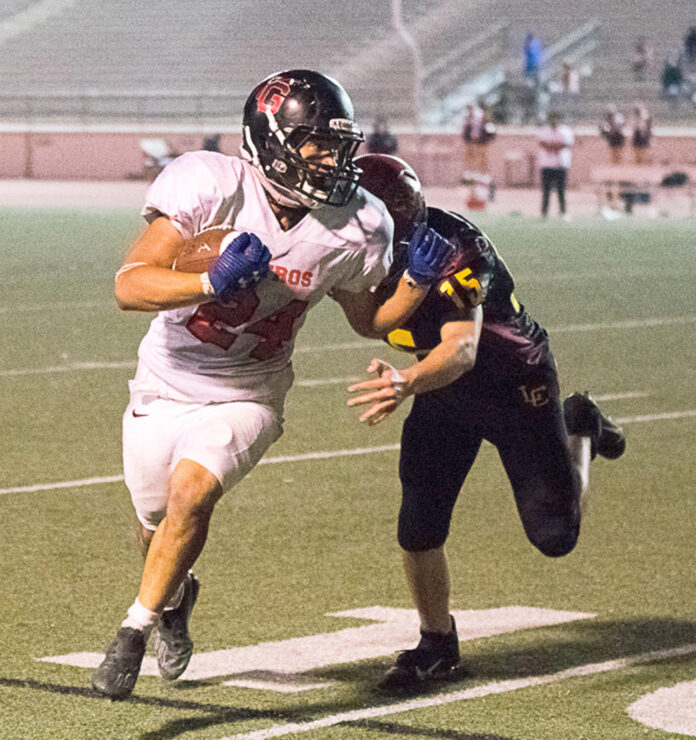 In its first football game in nearly 18 months, the Glendale High School varsity football team showed great promise but also showed its youth. The Nitros struggled to contain La Cañada’s mobile quarterback and dropped its home opener, 40-19, on April 2.
“We weren’t as prepared as we wanted to be, but I’m glad they got the opportunity to play,” said first-year head coach Jacob Ochoa, who knew it would be difficult to defend transfer quarterback Ivan Ostry, who led the Spartans with 264 rushing yards and four touchdowns. “It was really good, especially for our young players.”
Despite not having touched a football until last month, Juan Estrada had a good showing behind center. The senior quarterback completed 15 of 28 passes for 136 yards and a touchdown and rushed for 112 yards on 21 carries.
Estrada connected with junior Dino Villalobos for a one-yard touchdown, the Nitros’ first since Oct. 3, 2020.
“It felt great,” Estrada said. “It’s been a long time.”

Though Ostry ran wild around the field, the Glendale defense managed to keep him at bay and keep the game within reach.
Keirson Florita ran 22 yards for a touchdown with 8:18 remaining in the third quarter to cut the deficit to 16-13.
On the ensuing drive, the Nitros were close to getting a much-needed defensive stop. La Cañada went for it on fourth down with four yards to go from Glendale’s 43-yard line and Ostry evaded a few tackles and scampered his way into the end zone. He tacked on a two-point conversion to give the Spartans (2-1 overall record) a 24-13 lead.
Glendale fought back by driving down to the 10-yard line but the Nitros were tackled in the backfield in two plays and could not reach the end zone on fourth down from 15 yards away.
The Spartans rode that momentum and added two more scores to build a 40-13 lead with 6:30 remaining.
Agustin Alonzo scored Glendale’s final touchdown late in the game on a four-yard run.
Villalobos led all receivers with seven catches for 56 yards and a touchdown, and Florita added four receptions for 52 yards. Isaac Leiva had three receptions for 22 yards and ran for 27 yards on eight carries.
The Nitros (0-1 overall) hosted Gabrielino on Friday and will close out the shortened season at San Marino on Friday, April 16, at 7 p.m.