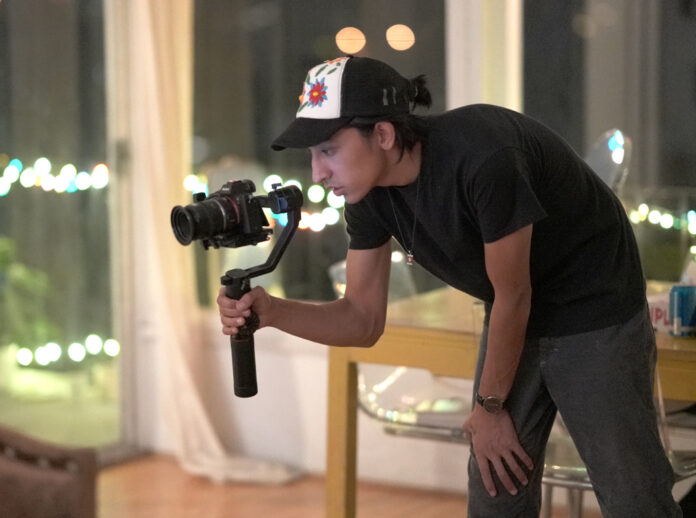 A film created by two Glendale residents has been selected as one of seven best films in “A Quiet Scene: L.A.,” a film competition and screening initiative that was launched in January.
Created and entered by Julia Lee and Tyler Lorita of Glendale, “Manganese” captures the solitude of a single day in a Los Angeles girdled by the throes of the COVID-19 pandemic, which is a central theme to the contest.
“‘Manganese’ is serenity,” said Lee, who graduated from California State University, Northridge, with a degree in cinema and television arts. “When Tyler and I began the project, we had a vastly different approach than what ended up as the end product. We began shooting quiet moments within the bustling city, whether it be an elderly couple sharing a lunch or catching a peaceful moment in an empty park. Toward the end of the day, we ended up at a bridge that is quintessential to L.A. It showed the whole view of downtown and the highway leading toward the city.”

Based on a song by the same name from Roger and Brian Eno’s album called “Luminous,” the concept of “Manganese” was to capture one part of Los Angeles in a seemingly quiet way, according to Lorita, who met Lee, a Glendale native, while following the same educational path.
“Julia had the most brilliant and artistic idea while we at the Elysian Park bridge above the 110 Freeway, to throw the shot out of focus,” Lorita said. “As soon as we did, the lights from the cars below became their own colorful circles. Some headlights were orange, others were a teal color, some flashing from the turn signals. It was beautiful, and yet we managed to turn something loud into something quiet.”
Lee and Lorita previously collaborated on “Sol-I-tude,” a short thriller that explores the fears the mind creates when a person is alone.
“We came up with this idea one night where a character comes home to odd occurrences and a sense that she was not alone,” said Lorita.
“It was a very spontaneous effort but we learned so much throughout the process since we were the entire crew,” Lee said. “I realized I feel my absolute best when I’m being creative and working toward a story I’m passionate about.”
Apparently so was L.A. Shorts Film Festival, which presented Lee and Lorita with an award for “Outstanding Achievement in a Mystery Short.”
The A Quiet Scene: L.A. competition is sponsored by the Music Center and dublab, which is a nonprofit radio station. Audiences will be able to view “Manganese” through a continuous live camera feed from the plaza, which will be livestreamed beginning at noon today through noon on Tuesday, March 23, at musiccenter.org and dublab.com.
The film will be shown publicly along with the other top festival selections at Music Center’s Jerry Moss Plaza today through April 18.
Don’t be surprised if you see more from the duo.
“Throughout film school, I realized the potential and the true beauty of film as an art form,” Lee said. “No other medium can engage all of the senses at once. Films are transformative. They have this surreal quality of being able to share a unique vision or perspective of life through the powerful medium of storytelling. We are all made up of stories; our entire lives are small stories. I discovered the power of being able to share your experience through the visual medium of film. My goal as a filmmaker is to be able to simply share genuine, unique stories that inspire compassion, spark conversations and more art.”
Lorita has a similar mindset.
“Film is a medium that is not only in tune with sight, but sound has a huge impact as well,” he said. “I think my interest in filmmaking comes out of seeing its potential and how the medium can translate a feeling or mood. There are endless ways to film something, so I think it’s a very creative field…if you make it.”