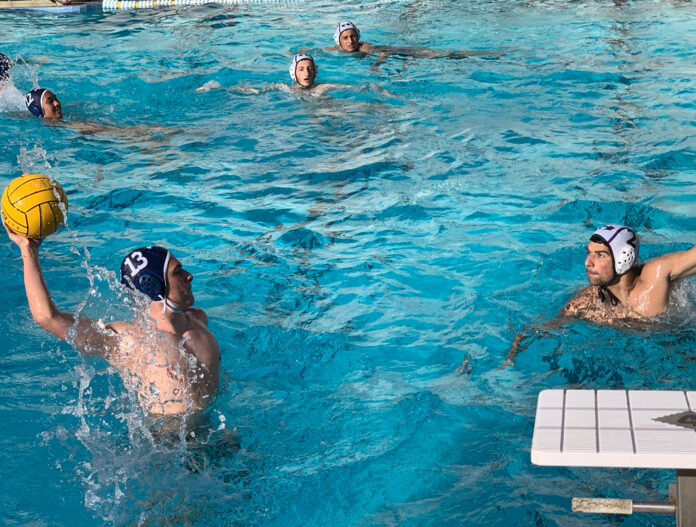 Five days after suffering its first loss at home, the Hoover High School boys’ water polo team collected a key road win at Crescenta Valley High School in La Crescenta on Tuesday. The Tornadoes pulled away in the second half thanks to some active defense and a scoring outburst from Samvel Manukyan, who finished with eight goals in the Tornadoes’ 14-7 victory.
Manukyan’s first goal came with Hoover down 3-1 late in the first quarter. From then until Manukyan and the rest of the starters were substituted out late in the fourth, the visiting Tornadoes outscored the Falcons 13-2. Hoover’s quick-strike offensive attack proved too much for CV, which had no answer for Manukyan’s presence in the center of the pool.
“The guy’s a great individual talent and he’s been the lynchpin of our offense since he’s been a sophomore,” Hoover head coach Kevin Witt said. “He knows how to make the right pass; he can read defenses.”

The Tornadoes also got two-goal games from Levon Harutyunyan and Hayk Yengibaryan, and a goal each from Alex Orujian and Vahe Ovasapyan.
CV also had one player shoulder most of the scoring load, as Hayk Mkrchian led the way for the Falcons with five goals. Alden Marriott and Russell Morrell each had one score and Connor Brisken chipped in two assists.
“[Hayk] played pretty inspired ball,” CV head coach Jan Sakonju said of his senior co-captain. “He’s had this motivation to get these games going. And I think that really showed itself today in his enthusiasm.”
The Falcons got off to a strong start, swarming on defense to counter Hoover’s aggressive style and scoring first after Mkrchian set up Morrell for the goal. They had more good ball movement to set up another goal from Marriott and a blind buzzer-beating hook shot from Mkrchian to take an early lead.
As the opening period wore on, however, Hoover started creating more opportunities. Whatever wall CV had been able to form on defense broke entirely in the second quarter, as Maukyan scored and set up Yengibaryan for another goal to help erase a 4-2 CV lead.
Hoover then took the lead for good as CV committed two costly fouls just before halftime, each resulting in a Manukyan penalty shot that he converted to give Hoover a 6-4 advantage heading into intermission.
“We had opportunities [early] and we were able to execute on them,” Sakonju said. “I think that was the key. Their defense started to clamp down and take away those opportunities.”
The second half was all Hoover. Attempts to contain Manukyan resulted in another major foul — and easy penalty shot — for the Tornadoes forward, and a double-team left Harutyunyan open for two quick goals of his own. On the other end of the pool, CV was able to keep possession but seldom found any clean looks against Hoover’s defense, and some strong play from goalie Oliver Baker took care of nearly every Falcons’ shot that was on goal.
“I just think we got warmed up,” Witt said. “Our team came out a little bit flat [in the first half] and then I think we kind of reengaged and realized what we had to do defensively on an individual basis and it kind of clicked as a team as well… obviously Oliver in goal just finishes everything.”
Witt also praised the defensive efforts of several of his other starters, including Orujian, Raffi Gevorgyan, Brandon Babaei and Aram Manyan.
“They’re all just doing a really great job right now,” Witt said.
Hoover went on to beat rival Glendale High School, 20-14, on Thursday to improve the Tornadoes’ record to 4-1.