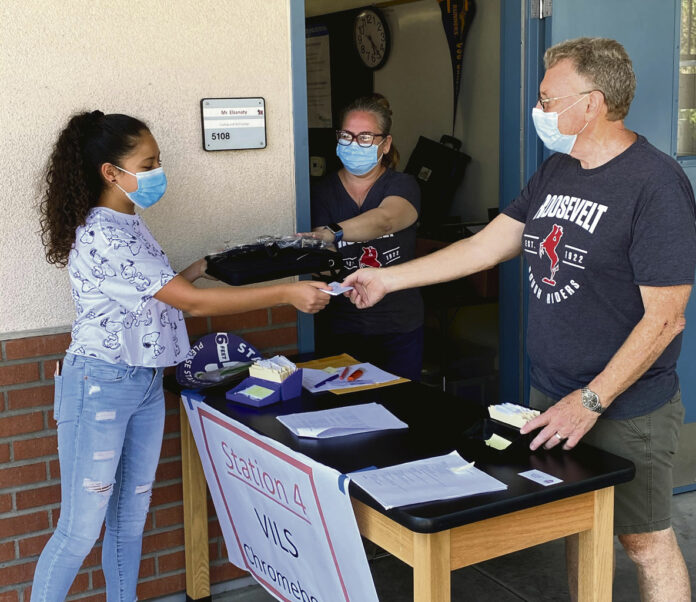 Following what can probably be categorized as the most volatile six months in its history, the Glendale Unified School District Board of Education discussed its list of priorities for the 2020-21 school year at its meeting Tuesday evening.
And, not surprisingly, making sure that distance learning works for all GUSD students amid the COVID-19 pandemic dominated the discourse.
Following tradition, the board first analyzed the set of guidelines that were adopted a year ago and include maximizing student achievement, creating a culture of learning, increasing engagement and maintaining district solvency and financial responsibility. Then Superintendent Vivian Ekchian pushed the discussion — which will continue in future meetings — toward major focus areas for the current academic year.
“This is the time to speak up,” Ekchian quipped, introducing the free-form conversation that followed.

Board member Jennifer Freemon said the district should develop and maintain procedures to ensure both the continuity of education as well as the health and safety of all members of the GUSD community.
“We are going to be spending a significant amount of time in making sure that our remote leaning is happening,” Freemon said, also mentioning the eventual transition to hybrid learning — partly remote, partly on campus, as health conditions permit. “This will be a continuing process.” Freemon indicated that she hoped the item would be on the list for only one year.
Board member Nayiri Nahabedian also mentioned that future priorities should be related to current circumstances.
“We can acknowledge the need to be more vigilant than ever to be able to assess where our kids are and what kind of impact distance learning is having on them,” Nahabedian said, mentioning that it is the board’s responsibility to create interventions to deal with the ramifications of distance learning.
She also suggested the panel address equity issues that have arisen over the past six months due to the closure of schools, including unequal access to technology.
“Sometimes we think of ‘digital divide’ as having the technology, but it is about more than that,” Nahabedian added. Gov. Gavin Newsom “has mentioned quite a bit being able to have everyone have the technology, the machines, the devices, and also the internet, the Wi-Fi access. But those things are not the only issues related to technology — being able to use it well, having parents who can help you use it well.”
Nahabedian suggested the next set of board priorities address the matter.
“My perspective would be to really acknowledge somewhere here, perhaps in the overview, the challenges or at least the reality of distance learning and the need to pay attention to the equity issues related to that.”
“Distance learning is the biggest undertaking that this district has probably ever taken in the entire, entire, entire history of this district,” said board Vice President Shant Sahakian. “It needs to be front and center.”
Board member Greg Krikorian acknowledged that the district’s budget and solvency will be “a critical issue,” but also mentioned the need to continue the development of quality academic offerings.
“Distance learning was a priority,” Krikorian said. “One of our priorities is that we have a quality structured program this year.” He said that, for educators, last spring’s immediate transition to distance learning was “a mulligan.”
“Now we are ready,” he added. “If we are not providing a good product for our students, what’s the need for them to come to our school district? Our priority should be having a structured, quality educational program that’s effective.
“The other area is increased engagement and I think we have to use the word ‘inclusion’ in there, too,” Krikorian continued. “We are financial stewards of this district, number one. We have a $300 million budget. The other responsibility is that we are providing a quality education for students, that they want to choose our public schools. There are so many options for them.”
Krikorian mentioned online and private schools that are competing with the GUSD for students.
“This is our responsibility,” he said of the need to retain students by offering a strong program.
Nahabedian said the board needed to “be more vigilant than ever.” She also stressed the need to include equity and anti-bias curriculum and address racial and ethnic issues in the district.
“I would love to open schools today,” Sahakian said, adding that he is “fairly confident we will be closed until the next semester.”
“Distance learning is going to continue throughout the entire year whether students, are on campus or off campus,” he concluded.
Krikorian said he hoped the list of priorities will be concluded sometime during September.