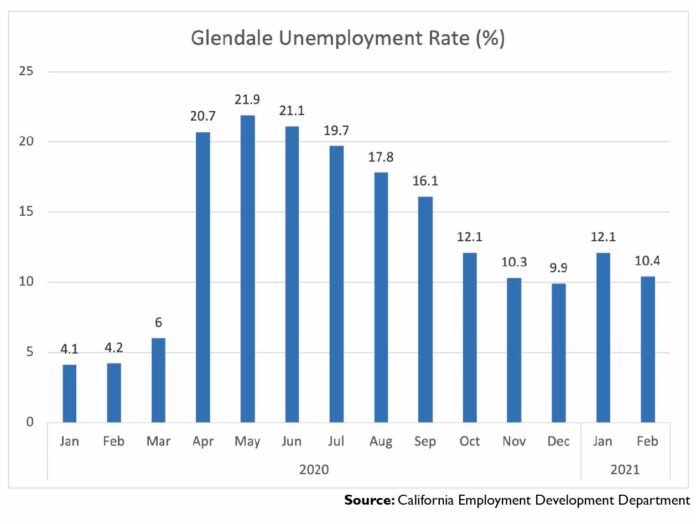 Hundreds of local residents returned to work in February following the lifting of statewide coronavirus restrictions, reversing a steep increase in unemployment reported at the beginning of the year.
The Glendale unemployment rate fell from 12.1% in January to 10.4% in February, according to preliminary data from the state Employment Development Department. The drop reversed some of the recent increases in the city’s unemployment rate, which was at a pandemic-era low of 9.9% in December.
The decrease likely reflects Gov. Gavin Newsom’s lifting of restrictions in state regions whose intensive care units were overburdened. His lifting of the stay-at-home order in late January, which allowed in-person dining to resume outdoors and loosened capacity limits for other businesses, accompanied falling COVID-19 hospitalizations and mounting political pressure, including a recall campaign.

About 92,700 Glendale residents reported working in February, up from 87,100 in January. The number of unemployed residents also fell from 12,000 to 10,700, while the city’s labor force swelled by about 4,400 people.
In February 2020, Glendale’s unemployment rate was 4.2%, representing about 4,400 unemployed workers.
Los Angeles County saw a similar decrease in its unemployment rate, from 12.7% in January to 10.9% in February. The county’s rate has historically been higher than Glendale’s.
The decrease in L.A. County’s unemployment rate represented a drop in its number of unemployed workers, from about 625,900 residents to 556,900.
California saw a less dramatic decrease, from 9% in January to 8.5% in February. Most of the job gains were in the “leisure and hospitality” industry, which includes hotels and restaurants. Education and health services also saw increases in employment, while the information and government sector reported losses.
The EDD’s data was not seasonally adjusted, meaning it did not compensate for changes in the job market attributable to holidays and other regular periods.
UNEMPLOYMENT BACKLOG SHRINKING
Glendale’s representative in the California State Legislature said issues with the Employment Development Department continue, with the agency grappling with more than 150,000 backlogged unemployment insurance claims.
Those claimants waited more than 21 days to receive their payment or disqualification notice during the week of March 27, according to the most recent EDD data. But that figure has decreased steadily over the past several weeks; more than 265,000 claims were backlogged during the week of Feb. 13.
Also during the week of March 20, the state paid more than 10 million claims. Another 1.28 million were deemed ineligible and more than 900,000 were awaiting certification from the applicant.
State Assemblywoman Laura Friedman, a Glendale Democrat, said her office has been trying to help constituents navigate the unemployment insurance process, but added that legislators don’t have the kind of immediate control over the EDD like a City Council might have over a municipal department.
Still, Friedman admits she is frustrated that residents haven’t been able to get timely responses from the EDD. She said recently that she has five employees — who were not originally trained to field unemployment claims — working on more than 1,200 unemployment insurance cases.
“We need to modernize these agencies and make that a focus,” Friedman said. “People can’t go for months without getting the benefits they need to survive. We’ve been here for a year and we have constituents who have exhausted their savings, they’ve exhausted their credit. … We have shut their businesses down [and] we have to have the responsibility to give them support.”
The EDD has made some improvements, Friedman added. Last year, the department added electronic identification verification and hired more staff. But she would still like to see more reforms. Friedman pointed to a California State Assembly bill she co-authored that would require the EDD to offer a direct deposit option to claimants.