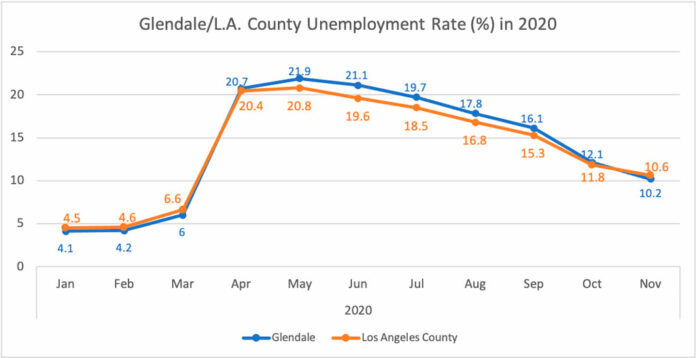 The unemployment rate in Glendale recently dropped below the Los Angeles County figure for the first time during the pandemic, reaching 10.2% in November. But an estimated 400 fewer people were actually working compared with October’s number.
The lower unemployment rate appears to be due largely to a decrease of about 2,700 people in Glendale’s labor force, putting the total at roughly 101,100 in November, according to preliminary data from the California Employment Development Department. It was the largest one-month drop in the city’s labor force since March to April.
About 2,300 fewer people were unemployed in November compared to October, but it is unclear how many of them found jobs rather than simply left the labor force — meaning they reported they were not working and were not looking for work.

In total, an estimated 10,300 Glendale workers reported being unemployed in November.
While Glendale’s unemployment rate has steadily fallen since May, when the rate was at a high of 21.9%, the city’s labor force has fluctuated, rising to 102,500 in July before dipping slightly again the next month. Glendale’s labor force was at the highest point it had been during the pandemic in October, when it numbered 103,800.
Likewise, the Los Angeles County labor force fell from 5.77 million in October to an estimated 4.99 million in November, with the unemployment rate falling from 11.8% to 10.6%.
The unemployment rate fell statewide to 8.2% in November, the lowest level since March, but like Glendale, California saw losses in both its labor force and total employment. The state’s labor force was down by 327,600 workers from October, and by nearly 600,000 since November 2019.
The data released by the EDD is not seasonally adjusted, meaning it does not compensate for changes in weather, holidays and other regular factors.
A statewide health order limiting retail capacity and banning in-person dining as COVID-19 cases skyrocketed and ICU beds became scarce has forced many businesses to cut employees’ hours or lay off workers. But because Gov. Gavin Newsom gave that order in December, its impacts are not reflected in the most recent EDD data. The state is being sued over its order.
State officials will not roll back restrictions for Southern California until the region has 15% or more of its adult ICU capacity. The figure has remained at 0% since mid-December.
The national unemployment rate, which the Bureau of Labor Statistics said was at 6.7% in November, is not projected to recover to pre-pandemic levels until at least the end of 2023, according to economic analytics corporation S&P Global.