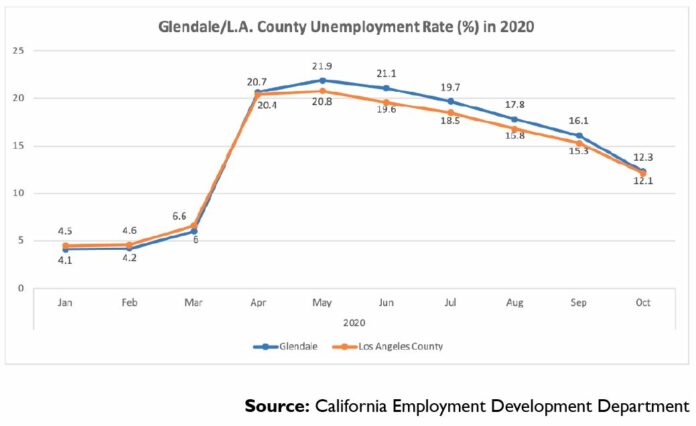 The unemployment rate in Glendale fell to 12.3% in October, according to preliminary data, as workers continued to return to their businesses — good news that contrasted with restrictions on commercial activities that were ordered in the last few days because of a resurgent COVID-19.
Approximately 12,800 local workers remained unemployed last month, according to the California Employment Development Department, down from 16,400 (16.1%) in September and a height of 21,300 (21.9%) in May. Glendale’s February unemployment rate was 4.2%.
The joblessness rate in Los Angeles County also continued to fall to a similar level, reaching 12.1% in October.

Statewide, the unemployment rate also descended to single digits for the first time since the pandemic began, falling from 11.1% in September to 9.3% in October.
The retail sector continued to recover throughout California, increasing employment by 2% from September to October, but remaining 6.2% below October 2019’s employment levels. Restaurants, bars and other food and drink services increased employment by 3.4% but its level had dropped by 21.1% compared to the same month a year ago.
The figures, which were released on Friday, Nov. 20, are not seasonally adjusted, meaning they do not account for expected employment fluctuations, such as retail stores’ tendency to hire more workers during the holiday season.
But a recent surge in coronavirus cases could affect many of the industries that are returning to business.
The COVID-19 pandemic forced closures of many sectors earlier this year, causing levels of unemployment not seen since the Great Depression. Later, as businesses adjusted and reopenings were allowed — to differing degrees and at varying rates — many people returned to work. Coronavirus case rates, in some areas of the United States, also began to flatten or decrease.
But in recent weeks, with the number of new COVID-19 cases breaking records and hospitalizations beginning to rise, many officials have sounded the alarm in their jurisdictions.
In California, Gov. Gavin Newsom announced a temporary curfew in most of the state, including L.A. County, to prohibit gatherings with members of other households between 10 p.m. and 5 a.m.
After the five-day average of new cases in the county reached 4,000 cases a day, health officials announced Sunday that restaurants, breweries, wineries and bars would not be allowed to offer in-person dining; only takeout, drive-thru and delivery services are permitted. The health order revision was expected to last three weeks at a minimum, according to the county public health department.
Nonessential businesses that can operate indoors, such as retail stores, offices and personal care services, are capped at 25% of their maximum occupancies and must be closed for in-person services from 10 p.m.-6 a.m.
County health officials also warned that if hospitalizations and the five-day average of new cases remained at alarming levels, only essential and emergency workers would be permitted to leave their homes.