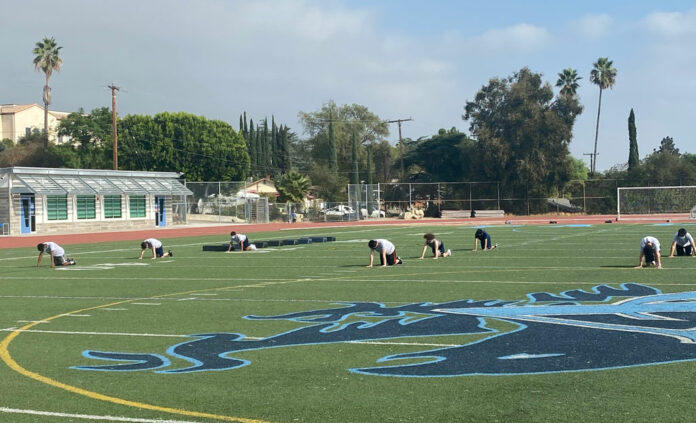 Under ordinary circumstances, the Crescenta Valley High School football team would have been either celebrating or lamenting the end of the regular season, which originally was to have concluded on Oct. 30. But in a world with COVID-19, everyday life is anything but ordinary.
“It’s just so bizarre, and I just can’t believe we’re in November,” said Falcons head coach Hudson Gossard. “Is there a chance of a football season? Who knows?”
The California Interscholastic Federation, the state’s governing body for high school athletics, has a schedule in place for fall sports to resume competition in December and January, should public health officials allow it. And if it does, teams in the Glendale Unified School District will certainly be ready.

Three weeks ago, the district opened its high school campuses to athletes participating in fall sports, which include football, cross-country, water polo, volleyball and cheer.
“Athletics play a vital role in promoting teamwork, improving physical and mental health and connecting our students with their school community and with each other,” GUSD Board of Education President Armina Gharpetian said in a statement. “We are happy to provide our student athletes with the opportunity to resume in-person conditioning, following all health and safety protocols.”
Student-athletes walk onto campus wearing masks and are separated into cohorts of 10 members or fewer for voluntary conditioning, skill-building and training exercises. Coaches participated in COVID-19 protocol training sessions to better understand the strict guidelines provided by the Los Angeles County Department of Public Health.
Each sport has designated entrances and exits to avoid any overlap or interaction between the groups of athletes. Administrators are on site and walk throughout campus to ensure guidelines are being followed.
“It’s a rigorous thing for the students, and they obviously have to be socially distanced,” said Mark Rubio, assistant principal at Glendale High School. “We have staff on hand to make sure everything’s going smoothly and everyone’s following the appropriate guidelines.”
David Keys, Hoover High School assistant principal, said the thought and planning that went into having athletes return was a “collaborative effort” involving the district and high school administrators that began two months ago.
“We’re excited to have kids out there and want to do what’s best for them,” Keys said. “As a former coach, it was just great to see players back out there.”
Crescenta Valley Assistant Principal Jordan Lessem expressed similar enthusiasm, saying, “It’s been the best part of my day to see kids out there laughing and smiling and having fun again. We walk around and check on each of the groups, and I’ve noticed that my attitude has been better the past few weeks. It’s nice to have some of the energy from students back on campus and to see people having fun again.”
Gossard said it certainly is a boost to the morale of not only the athletes but his coaching staff.
“You get that camaraderie back with the kids and coaches,” he said. “They haven’t seen each other in a while, so you get the laughing and joking that you’re used to seeing from your players, and that brings back a little sense of normalcy. And to be able to see them face to face, that’s such a big thing. It just gives all of us a little bit of an outlet. It’s been great.”
Rubio acknowledged that there was a “learning curve” during the first few weeks but felt that coaches, students and staff have been “getting more comfortable and more used to” the protocols and guidelines.
“I think things are operating and running very smoothly,” he added.
Should they continue to do so, the administrators hope to allow more athletes back on campus.
“Obviously, there’s a lot of hurdles, but this is the first step,” Keys said.