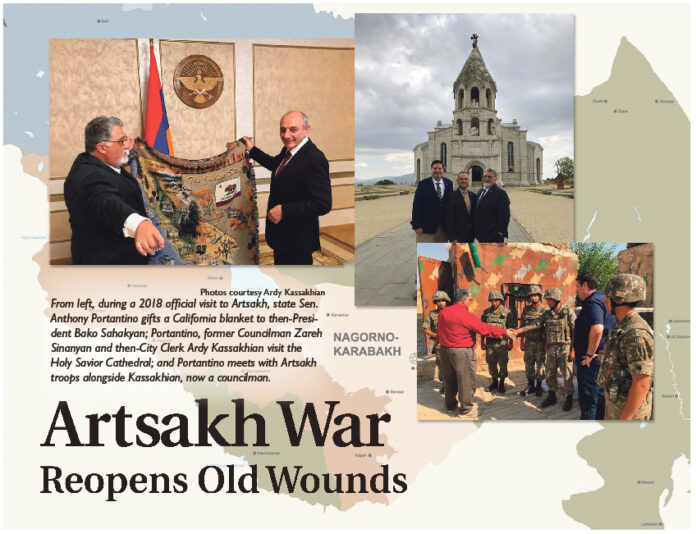 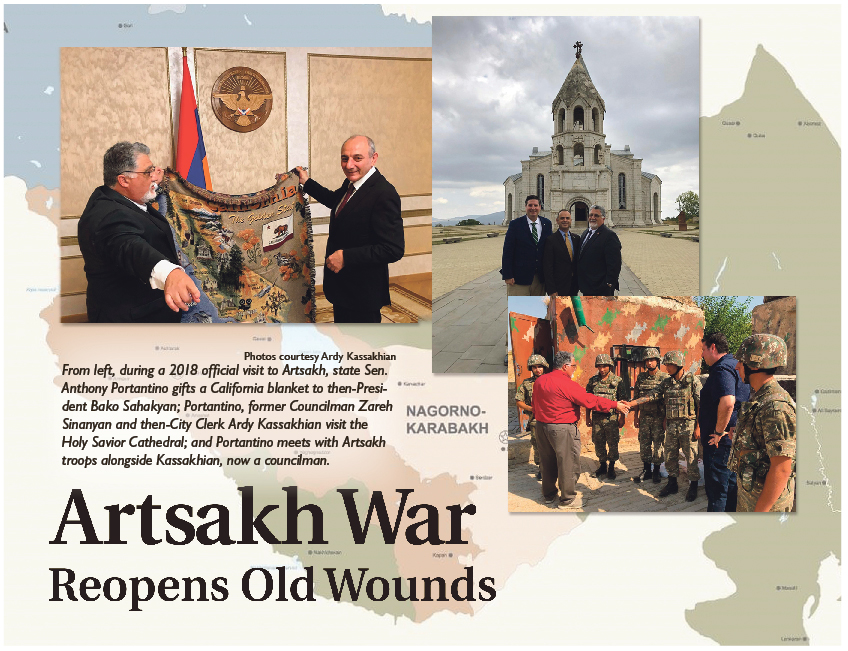 When local members of the Armenian diaspora woke up on Thursday and began to scour the internet and social media for on-the-ground updates — any news, really — from the front lines of the reignited war between Azerbaijan and the Armenia-backed breakaway state Artsakh, they found pictures of the Holy Savior Cathedral.
The stone cathedral, constructed from 1868-1887, had withstood damage incurred during the Azeri-led massacre of Armenians in the city of Shusha in 1920. After the religion-averse Soviet Union absorbed the Caucasus region, the cathedral fell into decline until it was restored in 1988. When the Soviet Union collapsed and the Nagorno-Karabakh region that is now home to the Artsakh republic fought for independence, Azerbaijani forces assigned the church the dubious role of storing missiles used against the ethnic Armenian forces there.
And on Thursday morning, Azerbaijani missiles struck the building and collapsed a portion of its roof, along with other damage.
“Just seeing it bombed today was like a punch in the gut,” said Councilman Ardy Kassakhian in an interview Thursday. “That is a very symbolic church, because since 1920, it gets repeatedly destroyed and rebuilt. That was very difficult to look at those images.”

It was just the latest of daily heartbreaks for the diaspora since Sept. 27, when fighting over the disputed region resumed after, most officials and analysts concluded, Azerbaijani forces made the first move. However, the anguish has been accompanied by solidarity and resolve in the influential Armenian community in Southern California to support their mother nation.
“What’s happening in Artsakh, it’s been a very emotional week,” said Armen Martirosyan, who helps run his family’s well-known Glendale eatery, Mini Kabob.
Even in a community known for its annual April 24 demonstrations recalling the Armenian genocide and for its spontaneous bursts of pride — replete with the citywide display of the nation’s flag — such as when the 2018 Velvet Revolution toppled a corrupt government, Martirosyan observed this was “the closest I’ve ever felt” for the local diaspora.
“It’s created so much unity,” he said. “The unity was always there, but this brought it more so.”
The roots of the present conflict can be traced to the World War 1 era, when the collapse of the Russian Empire granted a brief period of independence to Caucasus nations, including Armenia and Azerbaijan. The Armenians’ success in defending their claim of Artsakh was undercut when the Soviet Union simply recolonized the region and, following its common practice, redrew the boundaries of the republics to divide ethnic groups — which assigned Nagorno-Karabakh to the Azerbaijani republic. In 1991, when the Soviet empire fell, the Nagorno-Karabakh region — mostly populated by ethnic Armenians — voted to secede, triggering a war that reached a ceasefire in 1994 but, lacking a resolution, has resulted in periodic skirmishes since.
“It’s definitely an existential fight,” Kassakhian said. “Even though I’m not in the trenches or a citizen, I feel I connect very strongly with what the people there are going through. The only reason I’m here in the United States is because my grandparents were driven off of their ancestral ground by Turkish forces during the genocide.” 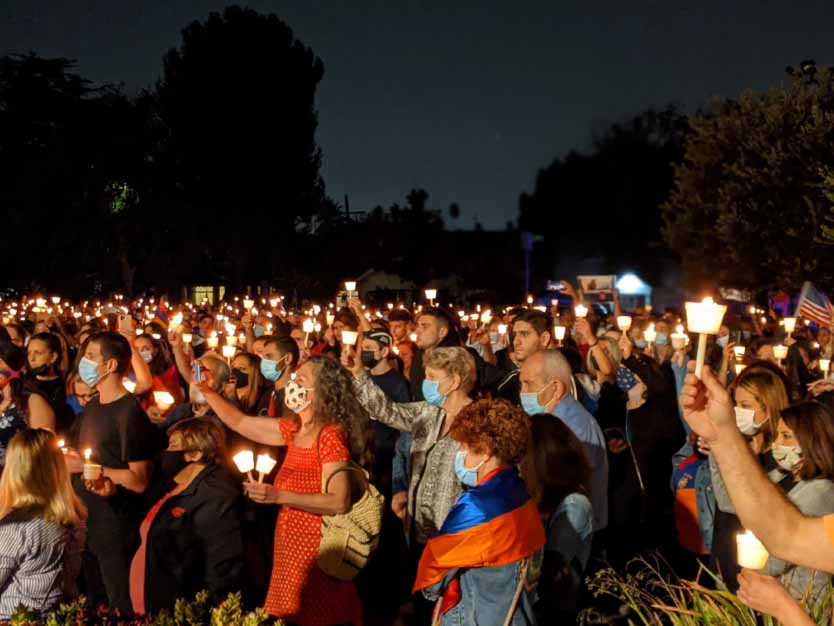 Artsakh, while entirely unrecognized as an independent nation, has mostly retained autonomy and has a functioning government. Kassakhian joined state Sen. Anthony Portantino and other officials on a trip there in 2018, including a visit to Shusha and the Holy Savior Cathedral.
“It’s a wonderful, charming little city, and now it’s turning into rubble,” he said. “The targeting of civilians and these towns that have no military significance is just inhumane. I can’t understand what kind of monster starts a war in the middle of a pandemic.”
Glendale native Emilia Der Sarkissian has felt her own connection to the conflict these past few weeks. Her mother’s family’s roots are in the region, roots that were excavated when Der Sarkissian’s grandfather fled amid the fallout of the genocide and relocated to Iran, where her mother was born and raised.
Der Sarkissian briefly visited Artsakh while on her birthright trip to Armenia, but she said she felt as if she needed more. In 2018, she founded a separate six-week internship program to send members of the diaspora to Artsakh, joining a handful of them in each of the effort’s first two years.
“We wanted to bridge the gap and let people actually go visit and stay at the place we grew up hearing about,” she explained in an interview. “We kind of imagined it as a mystical land. I wanted to stay in Artsakh and didn’t really have the avenue, so I decided to create one.”

Visiting her family’s homeland helped to assuage some of the cultural guilt experienced by members of the diaspora, Der Sarkissian explained, and she ended up doing “a lot of soul searching” while there.
“I always grew up in Armenian organizations and they prepared us for this moment,” she said. “When I went to Artsakh, I feel like a lot of the guilt went away. It really helped me on a personal level, for my own psychology; it really changed the way I see a lot of things.”
Various accounts indicate that thousands of soldiers on each side have been killed in the renewed fighting, with Armenia claiming higher losses for the Azerbaijanis. Hundreds of civilians have been reported killed or injured.
“I go onto Facebook and see someone else passed away,” Der Sarkissian said. “Friends have been posting pictures of their friends. I try not to get glued to my screen because once you check, you don’t stop.”
Added Martirosyan: “Every morning, my mom and my dad talk to their cousins. Every morning, they see what’s happening. There’s a lot of young kids dying — 17, 18 years old. That’s the worst part.”
Additionally, Turkey has provided military assistance to Azerbaijan, although the extent of that involvement varies by report. It is clear that Turkey has deployed fighter jets, but numerous accounts indicate that nation also has sent Syrian militias that are its allies to Azerbaijan.
“It’s all politics,” Martirosyan said, highlighting the distinction of opposing foreign governments rather than their people. “We all want to coexist, but it’s hard when the government is controlling everything that’s happening, and right now that’s war.”
Armenians largely see this as Turkish President Recep Tayyip Erdogan’s latest muscle flex in the region — Turkey is involved in proxy wars in Libya and Syria — and reinvigorated Ottoman-era Turkish nationalism.
“What we’ve seen through our education, through our upbringing, it’s definitely been something that was inevitable in our opinion,” Martirosyan said. “Through the genocide leading up till now, it’s something we had a feeling that it might come, and we had a feeling it would come through Erdogan’s regime.”

Almost overnight, that feeling materialized throughout the Los Angeles region. In Glendale, one virtually cannot go anywhere without seeing Armenian or Artsakh flags on storefronts, apartment balconies or vehicles. Pedestrians have made capes out of the flags. School board member Greg Krikorian sported the tricolor on his necktie at this week’s meeting.
Spontaneous marches and demonstrations have formed outside of City Hall and proceeded down Glenoaks Boulevard. A candlelight vigil was held Thursday at St. Mary’s Armenian Apostolic Church, and a march leading from the Armenian Consulate on Central Avenue to the city’s commercially oriented Artsakh Avenue is planned to begin at 6 p.m. today.
Demonstrations also have brought marchers outside of the Azerbaijani and Turkish consulates. Protesters made news highlights this week by blocking the 101 Freeway on one night and massing outside of the Los Angeles Times building in El Segundo on another.
“We weren’t trying to do that just to do it. It was legitimately a cry and plea for help,” Martirosyan said. “We have this tough exterior, but we are a sensitive people. We just want people to [care].”
Countless businesses in the area are joining in the cause as well. Restaurants and retailers — including Mini Kabob — are donating proceeds and tips to relief efforts, and other organizations have collected both monetary donations and supplies to send to soldiers and families in Armenia and Artsakh.
“I’m old enough to remember the first war in the ’90s and pogroms and riots when Armenians were beaten in the streets and killed,” Kassakhian said. “When the first war happened, the Armenian community here in Glendale, at least the ones from the Soviet Union, was really new. Now, you won’t find a person in Glendale with a relative over in Armenia who isn’t being impacted by this.”
Der Sarkissian acknowledged the collective energy of the local Armenian community and explained it as simply a staple of being part of the diaspora here.
“We’re no stranger to grass-roots movements. Most Armenians who are raised in L.A. County have been attending protests since we were children,” she said. “We get inspired by other people’s sacrifices, like the willingness of young men to go to war and lie to their parents about it. You read about these things, and the culture of activism is contagious. We’re raised with a personal responsibility to help out other Armenians and keep members of our race close. This is a survival response; that’s the darkest part of it. They say circumstances create the activist. They call you out of our dormant life. It’s not just true of Armenians, but also of other groups.”

Since 2015, Adventist Health Glendale has visited Armenia on an annual medical mission to provide life-changing health care and medical training. This year, with a global pandemic, the hospital suspended plans to visit.
But now the region faces a different kind of crisis. Azerbaijan is attacking the people of Armenia on the borders of Artsakh and its capital, Stepanakert — on the very week Adventist Health Glendale would have been serving in that region.
Adventist Health Glendale is asking for donations to help purchase and send surgical, medical, trauma and burn supplies, and medications to the affected region. Time is of the essence; the supplies and resources will be distributed by the Armenia Fund as quickly as possible.
To make a tax-deductible donation now, visit adventisthealth.org/glendale/our-foundation/compassion-in-action-mission-armenia.

Football. So Wrong. So Gritty. So Great.