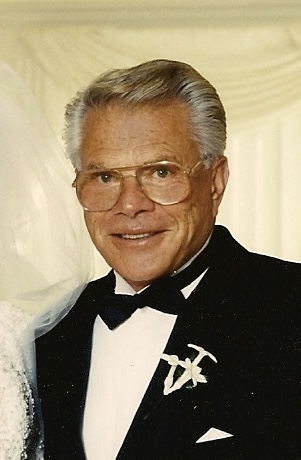 James Glenn Pollard, 96, of Oxnard, CA, passed away on January 17, 2022, at home surrounded by his family. Jim was born in Los Angeles to Marie and James Pollard on October 3, 1925. He attended North Hollywood High School, then enlisted in the United States Navy and fought in the South Pacific during World War II.

Upon his honorable discharge from the US Navy, Jim began a long career as an award-winning builder and developer in Southern California. His company, James G. Pollard & Sons, built over 3,000 apartment units, 1,500 condominiums and 600 tract homes. He also completed commercial projects from office buildings and restaurants to convalescent hospitals.

He served on numerous boards, councils, committees and building associations throughout his long career. He was also involved in civic leadership, serving as City of Glendale Planning Commissioner, Building Commissioner, Mayor’s Task Force and the Glendale Chamber of Commerce.

Jim retired in 1986 and moved to Oxnard with his wife Susan. With his extensive building experience, Jim immediately volunteered and served as president of The Colony at Mandalay Beach Homeowners Association for 22 years. He attended Community Presbyterian Church in Ventura and First Presbyterian Church in Oxnard.

Jim is survived by his wife Susan, sisters Suzanne Angelini and Cindy Adkins, children Tracy, James Jr. and Amanda, ten grandchildren and seven great-grandchildren. He is preceded in death by his son, Jeffrey.