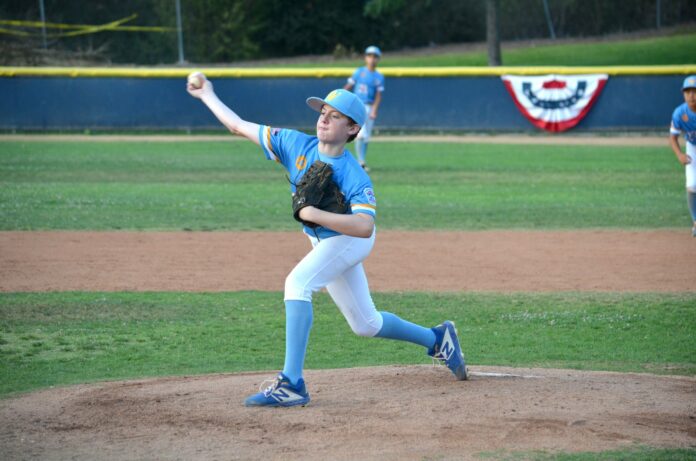 Hit after hit after hit. That was the story of the Little League All-Star baseball game between Vaquero-Burbank and Crescenta Valley, whose bats came to life in the bottom of the second inning, collecting an impressive 12 hits.

“We did what we came out here to do and that was to jump on fastballs,” said Crescenta Valley manager Mike Herman. “Attack and don’t put it in the umpire’s hands.”

The offensive barrage propelled the Crescenta Valley to a 19-1 victory over Vaquero-Burbank at Montrose Park on Thursday to advance to the District 16 Little League All-Stars final against Jewel City-Foothill All-Stars. The game was called after three innings due to the “run rule,” which states any team trailing by 15 or more runs after the third inning must concede.

“I thought our kids did what they could,” said Vaquero-Burbank manager Shonn Graham. “They came out hitting early and often and that was kind of the end of it.”

Things looked good for Crescenta Valley from the first pitch as Micah Roh hit a line drive to center field, getting onto first base, and Chris Chien followed with a double.

Vaquero-Burbank pitcher Braden Powers then walked the next two batters, putting Crescenta Valley in a good position to build a big lead early in the game. David Kao had an RBI hit, and Crescenta Valley ended the first frame with a four-run advantage.

It didn’t get any better for Vaquero-Burbank, which was unable to get a player on base in the bottom of the first. The Vaquero-Burbank defense just couldn’t keep up with the hitting lineup of Crescenta Valley in the second inning and surrendered 12 runs.

As Vaquero-Burbank trailed 19-0 in the bottom of the third, cheers and yells of encouragement poured out from its dugout as the team remained determined to keep fighting. After a slight delay due to a miscommunication over a substitution, Danny Guzman drove in his team’s lone run with a single that scored Noah Porter.

“Once we were down a little bit the kids were able to loosen up, that was good to see,” said Graham.

Vaquero-Burbank was able to avoid the shutout but was forced to concede at the end of the third inning.

Having already suffered one loss in the double-elimination tournament, Crescenta Valley must defeat Jewel City-Foothill twice to advance to the Section 2 Tournament.

The goal for all these all-star teams is to advance in local tournaments to qualify for the national Little League World Series, which will take place in Williamsport, Pennsylvania, in August.

The game will be on Saturday at 9 a.m. at Montrose Park in Glendale. Should Crescenta Valley win, a final game will be played at the same location Sunday at 10 a.m.