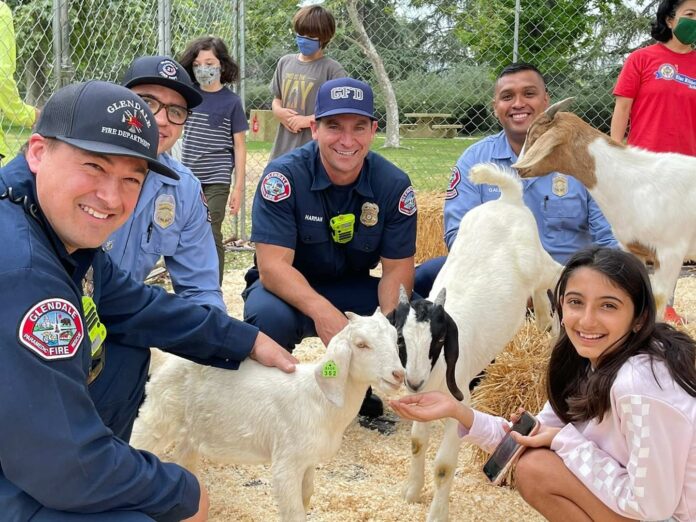 They’re hungry and they’ve been put to work here in Glendale.

In Montrose Park, you’ll find about 80 goats dotting the landscape, foraging for food in what has become a mutually beneficial relationship with the city and its residents based on fire zone brush clearance.

The Glendale Fire Department is making use of the farm mammals in a pilot program, which also included Verdugo Park, to test their effectiveness in wildfire mitigation.

“Verdugo Park and Montrose Park are both really big open spaces,” explained GFD Battalion Chief Jeffrey Ragusa, who is also a fire marshal, “and there are a lot of houses close to the brush there.”

The department is responsible for inspecting about 9,000 properties located in high fire hazard areas, which are usually nestled within the city’s foothills. Among those locations are about 300 open-space and park areas managed directly by the city.

Part of this inspection is ensuring there is 100 feet of defensible space surrounding the properties, not only to create a buffer zone between a potential blaze and a structure but also to provide a large area in which firefighters can safely work during a crisis.

And so, in these city-managed areas, brush clearance is the name of the game. Ragusa said testing the goats is costing around the same as the GFD’s usual mechanical tactics that involve people.

“Utilizing goats helps me distribute the workload for brush clearance throughout Glendale. Obviously, it’s environmentally friendly — all of our stuff is environmentally friendly, but when you do it the way that we normally do it, it’s labor intensive,” he said, adding that the key benefit is that “it really starts the discussion of why it’s important for our community to do their brush abatement to prevent the spread of wildfire.”

That’s likely because the spectacle of cute farm animals is enough to provoke the interest of many children at the parks, and thus also grab the attention of their families. Recently, the Fire Department hosted a “bleat and greet” at Montrose Park, as a local resident called it, where people could interact with the goats and learn about the department’s efforts.

Rick Stern, who lives in the Verdugo Woodlands neighborhood and has been a member of the Verdugo Woodlands West Homeowners Association, said his interest in goats as instruments of brush abatement stemmed in part from a time when the Ronald Reagan Presidential Library was threatened by wildfire in recent years.

The field surrounding that building, evidently, had been worked on by goats, which helped create a defensible space. Stern started talking about goats at association meetings and eventually brought the conversation to the city.

“I’ve been concerned [about wildfires] ever since I moved in here,” he said, noting he’d moved from the Vineyard neighborhood about six years ago. “When I got on the Homeowners Association board, at the first meeting, I asked if anybody knew about the use of goats here.

Through the recommendation of the Los Angeles Fire Department, Stern said he tracked down a company, Sage Environmental, that provides goats for brush abatement. Stern said he later brokered a meeting between Sage representatives and the GFD, and eventually, the City Council blessed the pilot program. The firm can deploy up to 200 goats at a time, and Ragusa said they can clear around an acre of brush in a day.

“This program was a real win-win,” said Councilman Dan Brotman, a founding member of the Glendale Environmental Coalition. “The city got to eliminate a source of wildfire risk and the goats got a yummy meal of Glendale brush. And we all got to enjoy playing with adorable baby goats — what could be better?”

Stern said he believes goats will eventually prove to have a significant advantage over the usual brush-clearing methods: seed removal.

“When hand crews cut down an area, they of course remove the foliage from an area, but they don’t get seeds,” he said. “Seeds can fall and sprout again. When goats do it they get the seeds, and whatever comes out the end of the goats does not grow. There’s a long-term benefit to using the goats over the hand crews.”

Ragusa said the pilot program was tailored to test this theory. There will be no other types of brush clearing deployed in the areas to which goats are assigned, he said.

“Potentially, the long-term benefit is that they will eliminate the brush that creates a nuisance,” Ragusa said. “That’s the theory from the goat herders’ side, but we’ll be able to test that because that’s the only abatement we’re doing in that area. Obviously, if you just use weed whackers, the seeds just fall on the ground.”

Most importantly, Ragusa reiterated, is that more residents are thinking about wildfire prevention from a firefighter’s lens.

“My motivation for this was to get people to start talking about brush abatement,” Ragusa said. “It’s extremely important. It stemmed a lot of conversations and the kids loved them. I haven’t heard any negative outreach from this community.”