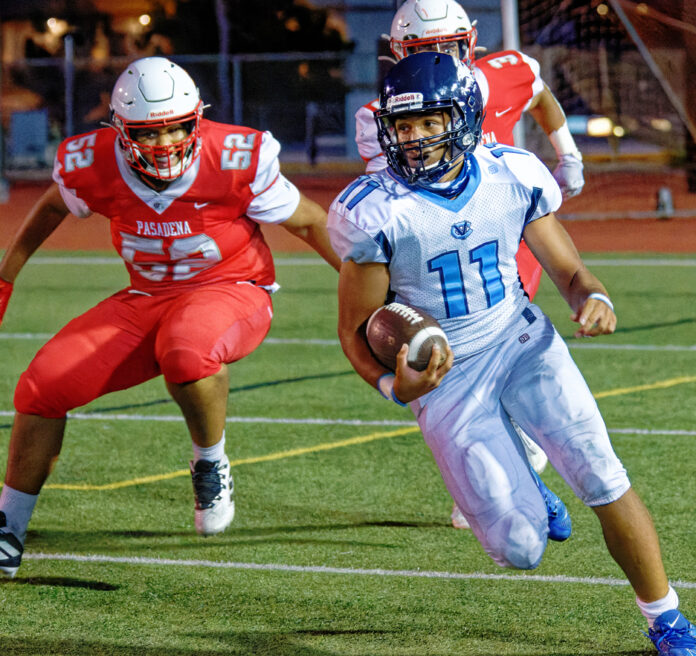 Pasadena High School recorded 381 total yards of offense and quarterback Dante Coronel connected with receiver Mekhi Fox for four touchdowns as the Bulldogs defeated defending CIF champion Crescenta Valley High School 41-20 on Thursday, spoiling the Falcons’ only home game of the shortened spring 2021 season.
The game was moved to Glendale High School’s Moyse Field to allow for socially distanced fans in the bleachers, along with cheer squads and a pep band (minus wind instruments per COVID-19 restrictions) on the CV side. The home team also had a short pregame ceremony to honor its seniors.
While Falcons coach Hudson Gossard believed it brought a more “normal” Friday night high school football feel, the result was still very much a spring 2021 affair, with Pasadena continuing its stunning rampage through the Pacific League thanks in large part to Coronel’s breakout season.

“He did a lot better reading coverages… saw what he needed to see,” Pasadena head coach DeJuan Shamburger said of his quarterback. “He made a couple bad decisions, but other than that, he played a great game.”
Coronel finished with an extremely efficient 209 yards on just nine passes in 15 attempts, along with four touchdowns and one interception.
CV quarterback Brendon Pehar tried to keep the Falcons within striking distance, finishing 16 for 37 with 196 yards, two touchdowns and two interceptions. Both of Pehar’s interceptions came toward the end of the game as he unleashed downfield throws into tight windows in an attempt to work a miracle for CV.
“The entire second half, the guys fought. There was no give-up in them at all,” Gossard said of his squad. “So that was awesome.”
But the Falcons were done in by “big chunk” plays, as Pasadena’s receivers were too much to handle in man-to-man coverage. After CV scored on its opening drive, the Bulldogs rattled off 21 unanswered before halftime thanks to a 36-yard pass from Coronel to Fox, a 16-yard run from Ahmad Jolley and a four-yard fade to Fox set up by a very lucky break. With Pasadena facing third and long, Coronel found Fox on a deep out route, but the ball bounced off Fox’s hands — and into the hands of fellow receiver Romel Veal, who took the ball down to CV’s seven-yard line for a 57-yard completion.
The second half brought more of the same. Pasadena received the opening kickoff of the third quarter and took just two plays to find the end zone again, as Coronel and Fox combined for their third touchdown of the night on a 46-yard completion.
Both head coaches knew defending an athletic receiver like Fox in man coverage could come back to bite CV, but Gossard gambled on selling out to stop Pasadena’s dynamic run game, which has worn down opposing defenses all season. It worked, somewhat, as Bulldogs star running back Daylon Beasley had just 33 yards at halftime. But Coronel made CV pay for that strategy by hitting most of his deep throws to Fox throughout the game. Fox finished with an eye-popping stat line of five catches, 118 yards and four touchdowns.
“Pasadena is a great team,” Gossard said. “They’ve got great athletes, run and pass. So if you are going to try to stop their great running game, you don’t have as much help over the top for your defensive guys. And so they hit those big plays. You try to pick your poison.”
CV had chances to keep pace at first, and Xavier White’s interception of Coronel in the second quarter seemed like a possible momentum changer, especially when star running back Sebastian DeLeon trucked a Pasadena defender on the Falcons’ next play from scrimmage. But CV’s drive stalled at the Pasadena 33-yard line on dropped a screen pass on fourth down.
The Falcons’ offense finally reawakened in the third quarter, as Gossard reached deep into his bag of tricks. First, a reverse to receiver Carson Center scrambled Pasadena’s defense, and Center threw for a 30-yard completion to receiver Shade Schaefer. CV marched to the Pasadena 11, then Pehar faked a quarterback draw and threw a screen pass to Grant Carl, who sprinted into the end zone.
Again, however, Pasadena answered right back, this time on a kickoff return for a touchdown from Jason Sanford, instantly snatching back any momentum the Falcons could muster.
CV still went down the field in just four plays and scored on a DeLeon run the very next possession — and Pasadena again responded with a touchdown from Coronel to Fox, their fourth of the game.
“We established some physicality, we had a couple passes in there, but then we couldn’t keep it going,” Gossard said. “I told the guys, it’s razor thin between winning and losing and there’s two or three of those drives in the second quarter where we didn’t make enough plays… just too many mistakes tonight.”
DeLeon finished with 35 rushing yards and one touchdown on seven carries and added 68 yards and another touchdown on five receptions. Fellow running back Matthew Watson had 34 total yards on eight carries and three catches. White had two catches for 23 yards, Schaefer had three catches for 52 yards, Patrick Weinmann had two catches for 57 yards and Center had one catch for eight yards and the aforementioned 30-yard pass play. Carl, one of the seniors honored pregame, had the one 11-yard touchdown catch.
On the Pasadena side, Beasley finished with 128 yards on 19 carries while Jolley added 45 yards and a touchdown on seven carries. Veal finished with two catches for 65 yards, Cameron Taylor had one catch for 19 yards and Cameron Mitchell had one catch for 10 yards.
Pasadena is now 4-0 and has won all of its contests by at least two scores. Thursday marked the third time in those four Pacific League games that the Bulldogs eclipsed 40 points. CV, meanwhile, had its record fall to 1-2.