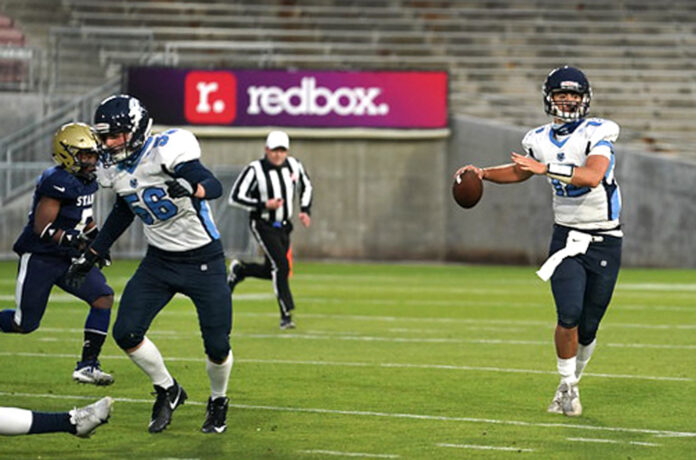 In its first full-blown competitive football game since the fall of 2019, Crescenta Valley High School hung with Pasadena’s Muir High School through three quarters at the iconic Rose Bowl but ultimately could not overcome six turnovers the Falcons committed, as Muir pulled away late to win 32-14.
The Mustangs beat the Falcons on Thursday for the first time since 2013 to move to 1-1 on the season and 1-0 in Pacific League play. CV, which has not played in 16 months, has an 0-1 record.

The Falcons were able to show some ball control thanks to the multi-pronged running attack of Sebastian DeLeon and Matthew Watson, who each recorded a rushing touchdown. Xavier White also had 26 yards on five carries. However, turnovers repeatedly cost CV at the end of long drives.
“This is the first time they’ve played a real game in over 400 days. You forget the intensity. You forget the physical exertion that it takes,” CV head coach Hudson Gossard said. “You get tired and you don’t think about those things. Obviously, you can’t turn the ball over like that and expect to win very many games.”
DeLeon was also involved in the passing game, finishing with five catches for 21 yards. Receiver Ryan Nelson added three catches for 40 yards, and Carson Center had two catches for 19 yards.
CV quarterback Brendon Pehar completed 11 passes on 26 attempts for 77 yards, to go along with two interceptions and two fumbles. Still, Gossard was pleased with how Pehar “competed his butt off,” especially being under constant pressure from a strong Muir defensive front that only got better as the game went on; the Mustangs finished with five sacks.
“He did great,” Gossard said. “It was a matter of we’ve got to shore up the offensive line a little bit. But their defense, I mean, those guys are quick, they’re athletic, they’re strong.”
Muir has had its own uphill battle in dealing with COVID-19 adjustments and the changes those bring to the normal rhythms of a season. That same defense that Gossard praised had also only practiced as a unit for one week leading up to the game, per Muir head coach Zaire Calvin.
“We literally have been following every protocol so we’ve been in little portal groups and just running conditioning for most of the time,” Calvin said. “So coming out of that, we finally got a week of practice, only a week, and then we were able to perform.”
On offense, however, Muir struggled to pull away from Crescenta Valley. CV’s defense made it difficult for the Mustangs to sustain drives, meaning that Muir would have to rely on chunk plays and good field position to get in the end zone.
“(Our) defense did a great job,” Gossard said. “The score does not indicate how good the defense did. They put us in position so many times; we didn’t cash in on a lot of the opportunities that the defense gave us.”
Chunk plays and getting the ball deep in CV territory after turnovers would be enough for Muir to stay one step ahead. After starting the game just 3-for-11 in completed passes, starting quarterback Jack Clougherty connected with receiver Tyrikk Lawson for a 48-yard strike to give Muir an early 7-0 lead. With the game tied at 7-7 following a DeLeon touchdown run, the Mustangs got the ball at the Falcons’ one-yard line thanks to the first of Eddie Byrd III’s two interceptions of the night. On the next play, Clougherty connected with Charles Bennet for six points to put Muir back on top.
Clougherty only connected on 10 of 27 pass attempts in the first half, and was benched partway through the third quarter for EJ Wallace, who took over just after Pehar marched his team down the field for another game-tying drive. Wallace swung the momentum right back to Muir, as his second pass attempt of the game went to Baylin Brooks for a 65-yard touchdown to take a 20-14 lead.
The Mustangs never looked back from there. Wallace finished 5 of 9 with three touchdown passes, including two to Brooks and one to Allen Bennett, as well as 94 yards passing. Clougherty finished 13-33 with 199 yards, two touchdowns and two interceptions.
“It’s just showing the grit,” Calvin said of his squad, which returns only four varsity starters from 2019. “This is a new team, they’re young, these are babies out here so they’re literally trying to learn on the fly, meaning they’re not getting film days, weight room… They’re getting everything and trying to learn as fast as we can the best we can with the situation we’re in.”
Both teams travel to the city of Burbank next week — Muir to play at John Burroughs High and Crescenta Valley to play at Burbank High in two Pacific League encounters on Friday, April 2.