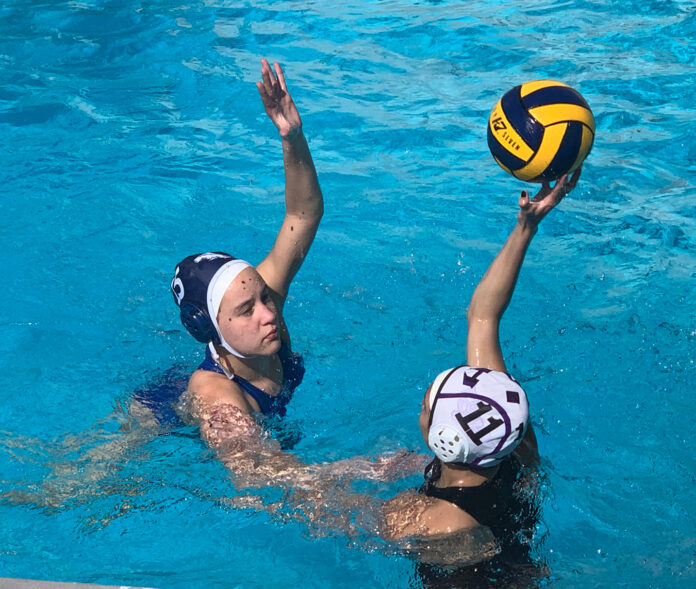 Thanks to scoring contributions from seven different players, including four goals from Malia Abrahamian, Crescenta Valley High School beat Hoover, 11-3, on Tuesday. The Falcons held the Tornadoes to one goal after the first quarter, locking down on defense and seldom letting Hoover get a clean look at the goal.
Every CVHS starter (except for goalie Miranda Graham) scored. Kyra Freeman had two goals and starters Katie Ward, Rana Mehai, Lilian Tahmasian and Holly Weston scored one goal apiece, as did A.J. Troop, who came off the bench. The egalitarian approach on offense was by design, according to Falcons head coach Amber Dien.
“I’m one coach that really focuses on not just having that star shooter or star player,” Dien said. “We really try to make sure that we’re moving the ball around and giving everyone opportunities.”

On the Hoover side, Elle Baker scored twice and Nairi Atamian converted a five-meter penalty shot to tie the game at 2-2 as the first quarter wound down. The goal erased a quick two-goal lead for CV out of the gate after some of Hoover’s earliest shot attempts hit the goalposts.
The first quarter also saw some stellar goalie play from Graham and her Hoover counterpart Kat Albert.
“I think we were just playing together on defense,” Hoover head coach Laura Lopez said of her team’s first quarter effort. “We’ve talked a lot about…helping one another on defense and it’s been a big theme this week. I think they really put it into play.”
In the second quarter, however, Hoover’s offense ground to a halt in the face of a smothering CV attack. That Falcons’ defense contributed to a breakaway goal from Mehai off one of several Hoover turnovers in the period, giving CV a 3-2 lead. CV scored three more unanswered before Baker’s buzzer-beating attempt found the back of the goal just before halftime.
The second half had more of the same, with CV moving the ball around the pool on offense and denying Hoover the ability to do so on the other end. The Falcons scored three goals in quick succession early in the third quarter but another good stretch for both defenses around their respective goals kept CV from adding to their lead and Hoover from cutting into it.
“Our challenge at the beginning was building that team communication and making sure that we were talking throughout,” Dien said. “But I think it really started to click during the second half and that’s why we really started to improve.”
Lopez was pleased with the way her team corrected some of its mistakes as the game wore on, but admitted that by the time the players did so, they were facing a big deficit that they ultimately could not come back from.
CVHS broke through in the fourth with goals from Freeman and Abrahamian, the only two Falcons with multiple scores on the day. They combined for six, and Abrahamian’s four goals outscored the entire Hoover team by herself.
“Malia is an absolute dominant force,” Dien said. “She’s someone I can stick anywhere in the pool and she dominates and does her job.”
CV went on to drop the next two games at La Cañada High School on Wednesday and at Arcadia High School on Thursday to bring their record to 2-2.
Meanwhile, Hoover (1-3 record) bounced back for their first win of the season with a 17-8 victory over archrival Glendale High on Thursday.

Film Festival Offers a Global Feast for the Eyes