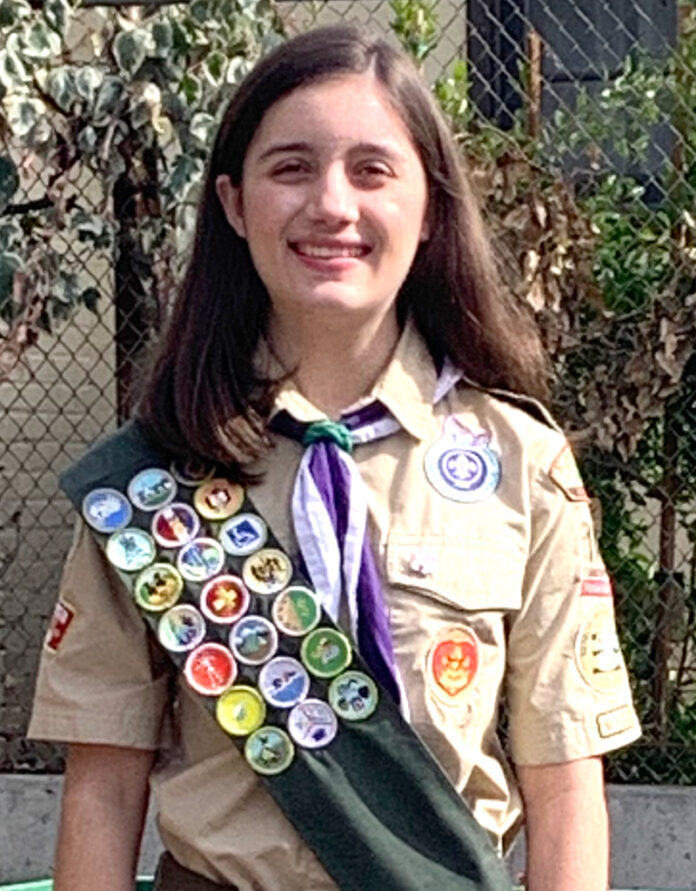 Four local teens are making history as they join the inaugural class of female Eagle Scouts. The rank of Eagle Scout is a prestigious achievement that has been attained by some of the country’s most noteworthy figures. And now, Adele Kelley, Darcy Kelley, Haneen Shehata, and Samantha Hoxsie are among thousands of young women who will make up this distinguished group.
“Earning the rank of Eagle Scout takes hard work and perseverance, and we are honored to recognize Adele, Darcy, Haneen and Samantha for this significant accomplishment,” said Andrew Sisolak, interim Scout executive. “Along the journey to Eagle Scout, young people gain new skills, learn to overcome obstacles and demonstrate leadership among their peers and in their communities. These benefits are invaluable for everyone, and we are thrilled that they are now available to even more youth.”

Young women have been part of scouting for decades in co-ed programs offered by the Boy Scouts of America, including Sea Scouts, Venturing, Exploring and STEM Scouts. The BSA expanded that legacy further in recent years by welcoming girls into Cub Scouts and then into Scouts BSA last February. Scouts BSA is the program for youth ages 11-17 previously known as Boy Scouts. Since then, tens of thousands of young women from across the country have joined the organization’s most iconic program, earning the rank of Eagle Scout.
Adele Kelley joined Scouts BSA after years of watching her brother participate in activities, she wished she could do. She could see that what he was learning through the program was valuable and fun at the same time. The leadership training in Scouts BSA is one-of-a-kind and she could discern that by going to the meetings and participating, the Scouts gain confidence in themselves.
Daniel DiMundo, a former Scout and principal of Glendale Oaks Elementary, sees the benefit of three Eagle Scout Leadership Projects to the school and the community. “When Adele, Darcy, and Haneen came to me with their proposals, it was business as usual. I looked over the plans and gave them some feedback. As I look back, nothing seemed strange to me at that first meeting. They were Scouts who came to me with proposals and we worked together to make sure they would benefit the lives of our students. However, I specifically remember driving home as it hit me that I had just met with three young women Eagle Scout candidates. Two thoughts are still crystal clear from that moment. The first was, ‘That’s amazing!’ The second was, ‘It’s about time!’ It has been an honor to be the beneficiary of their work.”
Adele Kelley’s Eagle project was to renovate and upgrade Rocky’s Vegetable Garden in the kindergarten yard at Glenoaks Elementary School. Darcy Kelley’s Eagle Project involved building a playhouse and small patio for the kindergartners at Glenoaks Elementary School. Haneen Shehata’s Eagle project was to design and paint a wall mural at Glenoaks Elementary School.
Samantha Hoxsie’s Eagle project was to redesign and repaint the 50-state mural for Bret Harte Elementary School.
Eagle Scout is the Scouts BSA program, highest rank, which only 6% of Scouts achieve on average. To earn it, an individual must take on leadership roles within their troop and their community; earn a minimum of 21 merit badges that cover a broad range of topics, including first aid and safety, civics, business and the environment; and they must research, organize, and complete a large community service project.
In addition to gaining skills that last a lifetime, individuals who earn the esteemed Eagle Scout rank can reference it for academic, vocational and military recognition, including scholarships and advanced enlistment grade.