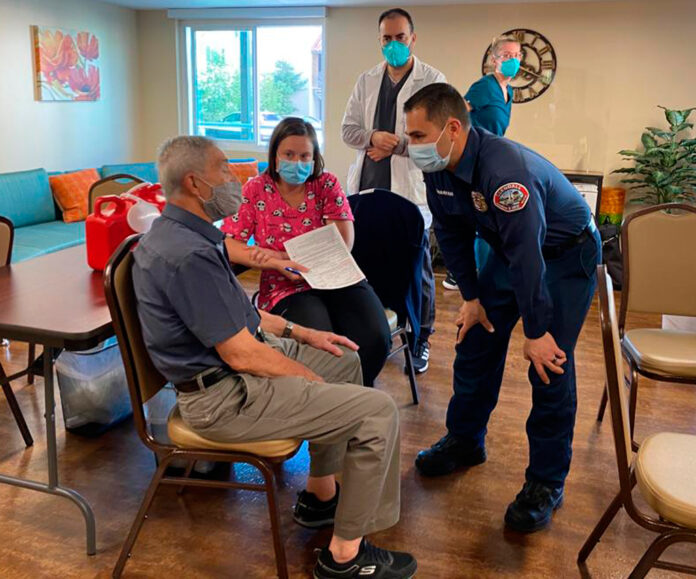 “We are definitely on a downward trend,” Glendale Fire Chief Silvio Lanzas said. “The one number, in my opinion, that is still way too high, is deaths per day. That’s the number that I would like to see come down before I’m truly sure that we’re trending in the right direction.”
As of deadline, the city was averaging four deaths per day for the prior seven-day period, after pretty consistently being at five or six daily deaths for the duration of 2021. From June through mid-December, Glendale very often had only one death per day — if not zero deaths.
Daily new cases in the Jewel City have been gradually falling in the wake of the Christmas and New Year’s holidays, during which Los Angeles County was practically setting new dubious records every day as caseloads sometimes soared past 20,000 new diagnoses each day. The already fragile health care system was pushed to the brink throughout December and January, with Southern California periodically having 0% intensive care unit bed availability and ambulances sometimes being directed elsewhere because hospitals were so overwhelmed.
Since Jan. 1, daily new cases have on average roughly fallen by around 4.5 new cases each day, spikes notwithstanding. Lanzas said he remained concerned that cases could start to climb again in the weeks following this past weekend’s Super Bowl and also after Valentine’s Day on Sunday.
“We essentially ran out of ICU beds across L.A. County during the Christmastime holiday,” the fire chief said. “If people are gathering more than what the orders allow, that still causes me some concern. I do feel that if people continue to heed the warnings and if we can get more vaccinations out there, that we can get behind this.”
Lanzas has said previously that his ambulance crews were never turned away by any of Glendale’s three hospitals — Adventist Health Glendale, Glendale Memorial Hospital and USC Verdugo Hills Hospital — during the surge, and that his department continues to have a strong relationship with the institutions.
As of Friday, Adventist Health had around 10% of its ICU beds available.
“As a large hospital, we’ve been able to scale our capacity based on needs, so during the height of the surge, we opened additional areas of the hospital for COVID care,” Dan Anderson, a spokesman for the hospital, said. “We’re hopeful the worst is behind us, but we remained prepared to meet whatever demands COVID presents.”
According to data from the U.S. Department of Health and Human Services that was analyzed by the Los Angeles Times, Adventist Health has had an average of 134 COVID-19 patients in the past seven days, making up 48% of the hospital’s patients. Glendale Memorial has averaged 74 COVID-19 patients (49% of its patients) while USC-VHH has 34 such patients (38% of its total).
The Times’ analysis also indicates that Glendale Adventist has averaged 44 COVID-19 patients in its ICU for seven days, while Glendale Memorial has averaged 16 ICU patients and USC-VHH has averaged six.
In total, there have been at least 17,671 Glendale residents test positive for COVID-19 throughout the pandemic, and 472 residents have died from the disease.
The rollout of vaccines continues to be hampered by the decentralized nature of the state’s pandemic response — which often has neighboring counties following wildly different guidelines and even individual cities using their own health departments to dictate policy — on top of the simple supply issues. County vaccination sites have had to cut off appointments and shut down this week in an effort to ensure that residents in need of their second doses of Pfizer’s and Moderna’s two-shot inoculation have priority over new patients.
Meanwhile, Johnson & Johnson is seeking emergency authorization for its vaccine in the U.S., which is expected to be a game-changer because it has far less stringent shelf life constraints — vials can be capped and re-refrigerated, while Pfizer’s and Moderna’s cannot be frozen again once unthawed — and requires only one dose.
In L.A. County, vaccines are available to health care workers and residents 65 and older. The county’s Department of Public Health said this week it hoped to begin opening up appointments for other high-priority workers — chiefly those in the food service and agriculture industries and teachers.
Lanzas said around 70% of his department’s first responders have had their second round of shots, and though he “would like to see that higher,” he also can’t discount the positive effect that it already has had.
“We haven’t had a member test positive or be put in isolation in over two weeks, which is outstanding,” he said.
The Glendale Fire Department this week partnered with CVS and the nonprofit HumanGood to procure and administer vaccinations to several hundred low-income Glendale seniors who qualify for vaccination this week. The department next week plans to vaccinate around 300 more such seniors in collaboration with Glendale Memorial and to again join with CVS and target yet another group of seniors.
“We have truly taken a stance that our most important duty right now is getting as many people vaccinated in our community as we can,” Lanzas said. “This is the humanitarian effort of our career and our employees are behind doing whatever it takes to get that taken care of.”