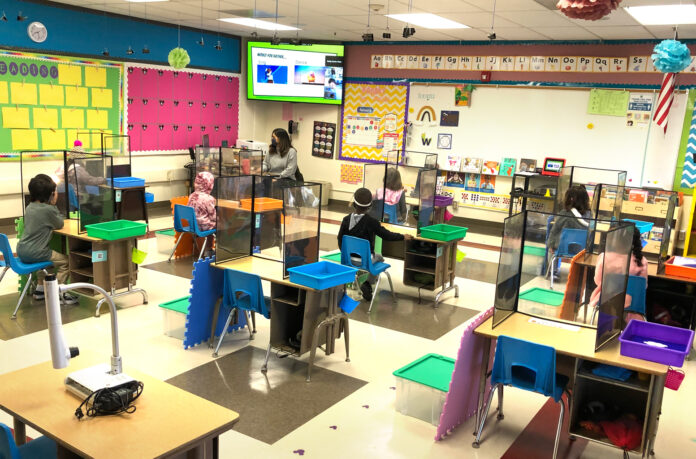 In anticipation of a coronavirus surge believed to be exacerbated by the December holidays, the Glendale Unified School District on Monday is pausing all in-person activities on campuses for the remainder of January.
The district tentatively plans to resume these programs on Monday, Feb. 1, but those plans, as with most things in the era of the coronavirus, are fluid. The latest decision comes by “strong recommendation” — not mandate — from the Los Angeles County Department of Public Health that “all TK-12 schools in the county suspend in-person student instruction, services and activities during the month of January as much as possible,” according to the district.

These temporary closures include the technology learning pods, which have served a child-care role for elementary school students; athletic conditioning, which began recently in anticipation of the delayed fall sports seasons; on-site assessments; and this week’s return of kindergarten and transitional kindergarten students to Horace Mann Elementary School.
“It is truly heartbreaking for me to have to pause our in-person programs, because I know they are essential to many of our students and families,” said Superintendent Vivian Ekchian in a phone interview, “but we are committed to following all health and safety guidelines, so this was the right thing to do. We have to be flexible and agile enough to properly care for our community and make the right decisions.”
Addressing the school’s brief return before this closure, Ekchian said Mann that students and parents were excited and relieved at the return to school this week and that the affected teachers began blazing a trail for their peers around the district.
“They are really piloting something that will become a definition of best practices and that other teachers and schools can benefit from,” Ekchian said.
GUSD’s grab-and-go meal services will continue at their sites for all children in the city who need them.
In its announcement, which was emailed to district parents and others who subscribe to GUSD messages, the district said it remained confident in its protocols to keep people distant, provide clean and hygienic facilities and mitigate potential spread of the coronavirus on campuses. Its decision, the statement said, was out of deference to public health guidelines.
Leaders at the city’s three hospitals also warned that the current surge — by far the worst period of the pandemic for L.A. County — may yet intensify as a result of holiday gathering-related spread.
According to a dashboard maintained by the district, there have been 33 documented cases of COVID-19 among students on-site, while 54 employees have been diagnosed with the disease. Out of those, the district noted nine possible instances of on-site transmission of the disease, although public health officials have found no epidemiological connection between two of them at one site.
“We are religiously diligent about our protocols to ensure the health and safety of our students and employees and this is why our in-person programs have been so successful,” Ekchian said.
As of the News-Press’ deadline on Friday, there had been 14,354 recorded cases of COVID-19 among Glendale residents, with 2,832 recorded in the prior 14 days alone. Countywide, the total is hurtling toward a cumulative 1 million cases among residents, of whom more than 13,000 have died; 2,000 of those deaths were recorded just this past week.
Officials estimate that upward of one out of every three county residents has had the disease at some point, with many not realizing it because they are asymptomatic and did not get tested at the time.
The county remains in Phase 1A of vaccinations, meaning that health-care workers continue to receive inoculations. Once Phase 1B begins, vaccinations will be made available for residents 65 and older, who are among the most susceptible to life-threatening symptoms of COVID-19. The Glendale Fire Department had early access to vaccines and its members continue to be first-responders to medical calls within the city.
In addition to those 65 and older, tier one of Phase 1B also includes educators and child-care workers as well as those working in emergency services, food and agriculture.
The GUSD Board of Education will be updated on the pandemic response, future plans and the short Mann reopening at Tuesday’s regular meeting, the first open session of 2021.