Dulcich Catching On at UCLA 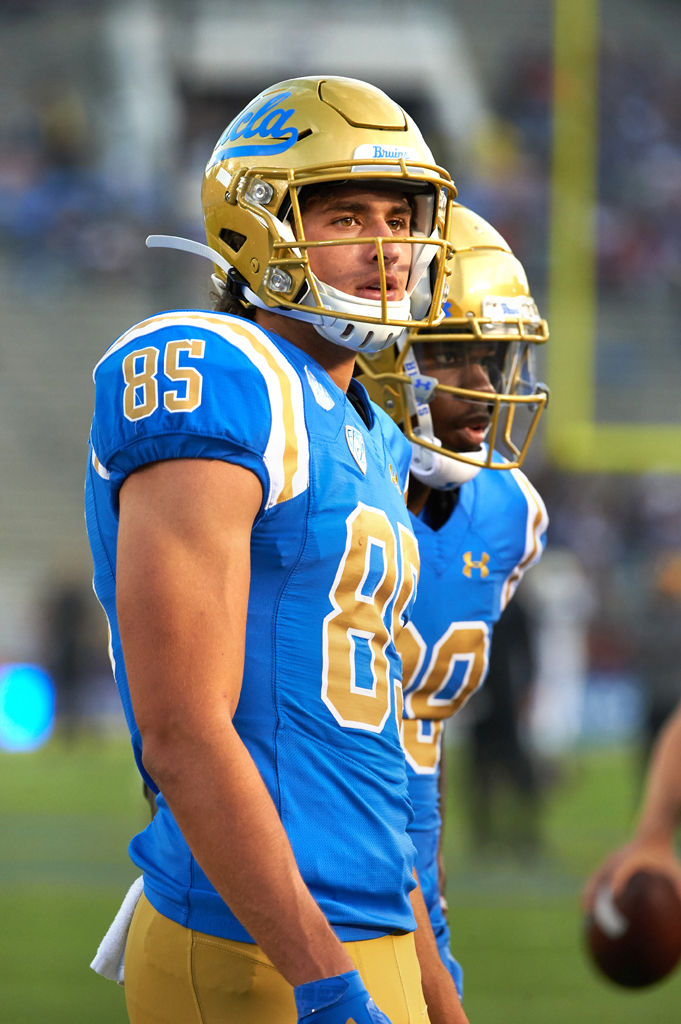 ‘‘And Greg Dulcich continues to make big plays!”
The familiar voice of Josh Lewin, play-by-play announcer for the UCLA football team, made that declaration on the warm Sunday morning of Nov. 15 as the Bruins squared off with Cal in the Rose Bowl and the tight end hauled in a 44-yard reception against the Bears.
Though a college football game being played on a Sunday morning on the West Coast was a rarity, one consistent theme of Lewin’s narrative was Dulcich’s playmaking. The observation was repeated over and over as the season progressed, so much so that the Glendale resident and St. Francis High School graduate ended the campaign by being named to the Associated Press 2020 All-Pacific-12 Conference second team.
Dulcich enjoyed a breakout campaign this past fall, hauling in 26 passes for team highs of 517 yards and five touchdowns. He turned in 167- and 126-yard-per-game performances, while no other tight end in the conference eclipsed 108 yards in a single game. His average of 73.9 receiving yards a game was tops in the Pac-12 at the position – pretty impressive for the redshirt sophomore who totaled eight receptions for 111 yards and one touchdown in his first two seasons combined.

Many took notice of Dulcich during the pandemic-shortened season, not merely due to his 6-foot-4, 242-pound frame. When UCLA had the ball near the opponent’s goal line, the cry of “It’s Dulcich time!” was frequently heard. Opposing coaches took notice, as did NFL scouts.
Maybe most important, Bruin head coach Chip Kelly can be counted among those in the easy-going, polite young man’s fan club. With the COVID-19 pandemic getting the nation’s full attention, Dulcich received a special phone call from Kelly on March 26, which happens to be the player’s birthday.
“Coach Kelly said he wanted to do this in front of the entire team, but he wasn’t sure when we would all be back together. Then he said that based on my hard work, he was going to put me on scholarship and he wanted to do it as soon as possible,” Dulcich said. “That was a pretty nice 20th birthday present.”
Kelly and the Bruins have certainly gotten their money’s worth and the squad appears to have things moving in the right direction. UCLA finished 3-4 in the pandemic-shortened season, including a 43-38 loss to crosstown rival USC in the penultimate contest and a 48-47, double-overtime season-ending loss to Stanford.
In the final analysis, the Bruins’ four losses came by a combined 15 points, signaling improvement in a team that finished 4-8 in 2019. Like many Division I programs, the Bruins declined offers to participate in a bowl game.
“The USC game, I think, was another example of just how good our team is,” Dulcich said. “We were really rolling against a top-25 team and it really showed how far we’ve come and how things are really building here in Westwood. Obviously, the result was tough to swallow, but games like that stick with you and those feelings fuel your offseason preparations.
“You’ve always got to look on the bright side, especially when it comes to rivalry games or not having a bowl game. It’s just more time for us to prepare for next year, where I know we’ll be very successful. I am extremely excited for what we’re putting together.”

HIGH SCHOOL SUCCESS
Few if any who are familiar with Dulcich are startled by his success. While a junior at St. Francis, he made 30 catches for 406 yards and four touchdowns. He caught 50 passes – and the attention of recruiters ­­— during his senior year, gaining 1,168 yards and scoring 12 touchdowns on pass receptions and another three running the football. He proved his durability by recording 21 tackles on defense. That season, the Golden Knights advanced to the 2017 CIF Division 3 championship — the school’s first in 53 years — where they suffered a heartbreaking 44-42 defeat at the hands of Rancho Verde on a last-second field goal.
“Yeah, we almost came away with that one,” said Dulcich. “It would have been special.”
The words “special” and “heartbreaking” could easily apply to feelings Dulcich holds for St. Francis football coach Jim Bonds, who died of cancer in late October at 51 after 20 years with the Golden Knights.
“I LOVED him,” Dulcich exclaimed, his voice rising. “He was so influential in my life. I would not be at UCLA if it weren’t for him. He was so special to the entire St. Francis community. Coach Bonds was probably the most selfless person there is. He loved coaching, but he was so much more than a head football coach. He was awesome, and his passing is a real loss.”
Dulcich was listed by ESPN as a three-star recruit and the No. 78 recruit in California for the graduating class of 2018. He was heavily recruited by Derek Sage, then the receivers coach at Washington State. When Sage ended up at UCLA, so did Dulcich.
“I think me being a local guy, he recruited me pretty hard,” said Dulcich.
Sage was impressed by Dulcich’s versatility and work ethic.
“Coach Kelly asked me to rack my brain to find receivers and I sent him some tape on Greg,” said Sage. “He said, ‘That kid can run.’ We talked to Greg and I think living so close to the Rose Bowl made it more attractive. Coach Kelly also has a great record with developing tight ends.”
Dulcich’s intangible qualities also impressed the coaching staff.
“He is a great ‘character’ kid who comes from a great ‘character’ family,” Sage continued.
“He also has a crazy competitive chip on his shoulder. He is a quiet, unassuming guy until he suits up and goes to work. Another great thing about Greg, he asked that we not treat him like he is just a pass-catching tight end. He wants to be able to line up and block as well. He is one of our best practice players. He has worked very hard, and you saw the results on the field.”
The “local guy” saw action in three games as a freshman and excelled at special teams play.
As a sophomore, he was on the field in 11 games on special teams and as a receiver, making his first touchdown reception — a 20-yarder against San Diego State.
“I enjoy special teams,” said Dulcich. “It’s a great way to get on the field. “Whenever you get your number called, you go in and take a shot.”
The son of Anna and George Dulcich, Greg has an older brother, George Jr., and two sisters, Eva and Madeline. George preceded Greg at St. Francis and also played football for the Golden Knights.
“He really inspired me to play football,” said Greg Dulcich. “Watching him play really meant a lot.”
Eva and Madeline are graduates of Flintridge Sacred Heart.
Dulcich also played basketball and participated in track and field at St. Francis and fares well in the classroom. At UCLA, he has been named to the Athletic Director’s Honor Roll for the fall 2018, winter 2019, winter 2020 and spring 2020 quarters. The list hasn’t been announced for fall 2020, but when it is, Dulcich’s name will most likely be on it.
Because of the pandemic, this past season will not count against his eligibility, so Dulcich might enter the 2021 football season as a redshirt sophomore — again. However he is classified, Dulcich’s future is a bright one.
“I really admire Coach Kelly,” Dulcich said. “The way he approaches the game and the way he approaches the players is really special. He knows what we can handle and he knows how to play to our strengths. This system is also very comfortable for me. I think we use tight ends well and a lot of time we have multiple tight ends on the field. The faith he has in the team and also the way that Coach Sage teaches us. We understand the ‘why’ of what we are doing, be it in the running game or the passing game. Our goal is to become a complete player.”
How about a complete NFL player? Dulcich has been sometimes been projected as one.
“I want to play football for as long as I can and am open to whatever opportunities present themselves,” he said. “The No. 1 goal is to win games. If you’re not winning, it doesn’t matter.”