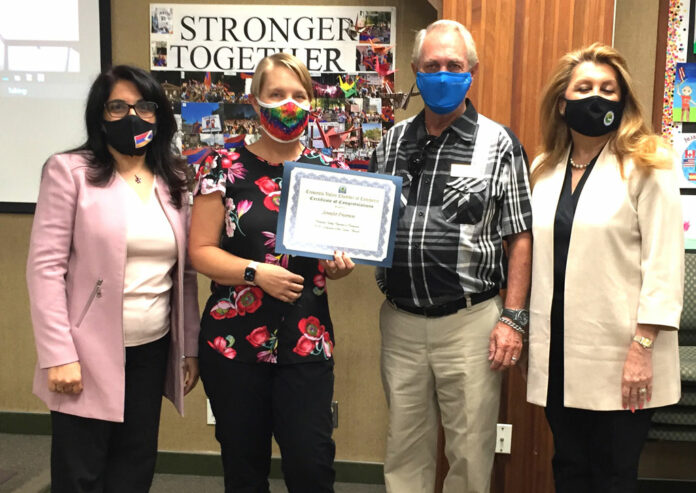 For its response to the coronavirus pandemic, the Glendale Unified School District was tabbed as the Organization of the Year by the Crescenta Valley Chamber of Commerce in the group’s annual recognition awards last week.
One of the district’s board members, Jennifer Freemon, also was named Educator of the Year by the chamber. Overall, the organization handed out 10 awards in a virtual ceremony last week.
In its program, the chamber highlighted what it described as a nimble response by the GUSD when the pandemic struck in March, prompting school closures and stay-at-home orders from the county. The district distributed laptops for students to use in distance learning and prepared to-go breakfasts and lunches every day for all children in the city who needed them.

When the fall semester kicked off, the GUSD pioneered “learning pods” — in which groups of about 10 elementary students were placed in separate classrooms and supervised by substitute teachers or classified employees — to provide child care to essential workers, teachers and lower-income families while their children continued distance learning.
“They have done an amazing job of putting together a district program for the students, parents and teachers. To have all the various curves thrown at them, they have just been absolutely incredible,” said Steve Pierce, the chamber’s executive director, in an interview. “How they put that together in such a short period of time to make that work is an amazing story. We’re very proud of our Glendale Unified School District.”
Vivian Ekchian, the GUSD superintendent, said it was validating to be recognized by a group she considers to be a strong community partner.
“We’re delighted to receive this recognition [from] a partner that has been such a collaborative group,” she said. “The C.V. chamber has really demonstrated what being a partner means, and during this pandemic I have felt their support for our students, teachers and community every day.”
Freemon, a school board member since 2015, earned the nod at the recommendation of chamber board member Ken Biermann, Pierce said. A former educator with the Glendale district, Freemon joined the Los Angeles Unified School District this year while helping to shepherd the GUSD through the pandemic.
“We all took a look at her and decided she was certainly deserving of Educator of the Year,” Pierce said.
Keith Hobbs, CEO of USC Verdugo Hills Hospital, was named Man of the Year by the chamber, of which he is a board member. Described as “local boy makes good” in a mock headline in the program, Hobbs was credited by the chamber with improving operations at USC-VHH since he took the helm.
“Keith has done just an amazing job during the pandemic,” Pierce added. “The hospital is very active in our community.”
Marianne Jennings, president of the La Crescenta Woman’s Club, was tabbed as Woman of the Year in recognition of her vast involvement with various organizations locally and in the region. She also was a Girl Scout leader for 28 years before retiring from the organization in January.
“She’s done an amazing job of fundraising and being involved in various activities in the community,” Pierce said. “She gives from the heart, and she’s given a lot of money and personal time to things in this community.”
Ace Hardware of La Crescenta was named Business of the Year, an accolade it achieved despite opening just this year. The chamber’s program lauded the February opening of the store for having a community-friendly party and for putting its best foot forward during the pandemic.
“They opened up just before all of this hit, and they’ve been amazing,” Pierce said. “They’ve been very active in the community and they continue to send out a lot of promotional things with coupons, and it really does work. During a pandemic, people were trying to save their money. It’s a great promotion for them. You walk in the store and they have people who are greeting and helping you. They’ve just been a great addition to our community.”
American Softhub on Foothill Boulevard won the Beautification of the Year award, thanks to its picturesque layout in front of and around the business, including a swath of natural flowers, water streams and native rock formations.
“It makes you feel like you’re not even on Foothill Boulevard,” Pierce said. “You walk onto their property and have no clue that 35 feet away is the busiest street in our community.”
Mike Baldwin was named Volunteer of the Year, in part for his work in improving the Veterans of Foreign Wars Post 1614 and American Legion Post 288, in which he has membership, but also for his dedicated volunteerism in other initiatives. He is presently overseeing the improvement of disability access to the American Legion and previously helped raise funds for and build the War Memorial Wall at Two Strike Park.
“Mike is one of those guys who’s just always saying, ‘What can I do to help?’” Pierce said. “He’s been responsible for a lot of the growth over at the VFW and just doing what he can to help out.”
The chamber also recognized Anthony Chacon as the Glendale Police Department Officer of the Year for his extra volunteer work with children in the community and participation in the Shop With a Cop program. The Montrose Search and Rescue unit was named Team of the Year for the Crescenta Valley Sheriff’s Station, in lieu of the usual honors for a single deputy, especially for the outfit’s seven response missions and two vehicle rollover calls during the Bobcat Fire in September.
From the California Highway Patrol, Officer Jeremy Keller was named by the chamber as that agency’s Officer of the Year.